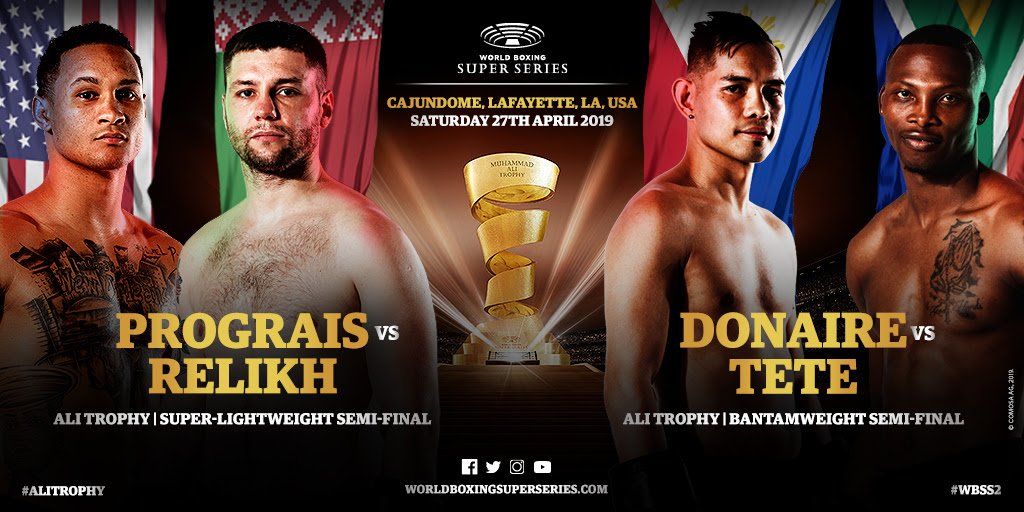 The World Boxing Super Series has partnered with Sky Sports and Matchroom Boxing to exclusively broadcast the three massive Semi-Final doubleheaders in the UK starting April 27 from the USA.

Sky Sports, the UK’s premier sports broadcaster, includes the World’s premier boxing tournament to its schedule with the quest for the Greatest Prize in Boxing, the Ali Trophy, entering the much-anticipated semi-final stage.

The WBSS joins top boxing stars such as Anthony Joshua on the UK platform and adds some mouthwatering match-ups over the next few months as the finalists are decided, such as Nonito Donaire vs Zolani Tete, Regis Prograis vs Kiryl Relikh, Naoya Inoue vs Emmanuel Rodriguez and Ivan Baranchyk vs Josh Taylor.

“The WBSS is delighted to be working with Sky Sports and Matchroom Boxing to bring our sensational semi-finals to as many UK fans as possible,” said Kalle Sauerland, Chief Boxing Officer of Comosa, the organiser of World Boxing Super Series. “Boxing fans can look forward to colossal nights of boxing. Supreme athletes in the bantamweight, super-lightweight and cruiserweight divisions are putting everything on the line for a place in the finals of the WBSS where the Ali Trophy awaits the winners,” added Sauerland.

Adam Smith, Head of Sky Sports Boxing, said: “I’ve admired the talent of Josh Taylor for a while and I’ll look forward to another red-hot atmosphere in Glasgow as Taylor bids to become the latest in a line of proud Scottish world champions.

“It’s wonderful to add The World Boxing Super Series semi-finals to our stacked Sky Sports schedule for the summer.

“I’m delighted to bring these fight nights to Sky Sports and particularly pleased to air the big May 18 card from Glasgow,” said Eddie Hearn, Matchroom Boxing Managing Director. “It’s a massive chance for Josh Taylor to become World champion and the fight between P4P star Inoue and Rodriguez is a cracker.

“It completes a huge May with action every weekend – we begin with the Middleweight unification between Canelo and Jacobs on May 4, then we return to Nottingham on May 10 for the latest installment of the JD NXTGEN series – May 18 in Glasgow followed by the WBC World Heavyweight title clash Wilder vs. Breazeale from New York and then on May 25 the undisputed Cruiserweight champ Aleksandr Uysk makes his Heavyweight debut against Carlos Takam in the States. This builds us into the US debut of Anthony Joshua at MSG on June 1 – what a schedule!”

On May 18 at The SSE Arena in Glasgow, Scotland:
In a sensational doubleheader of the undefeated: IBF World Champion Ivan Baranchyk (19-0, 12 KOs) of Belarus faces Scotland’s WBC Silver Champ Josh Taylor (14-0, 12 KOs) in a super-lightweight semi-final and Japanese superstar and WBA World Champion Naoya Inoue (17-0, 15 KOs) battle it out with Puerto Rico’s IBF titleholder Emmanuel Rodriguez (19-0, 12 KOs) in a bantamweight semi-final.

The World Boxing Super Series at a glance:
Organised by Comosa AG, the World Boxing Super Series kicked off its inaugural season in September 2017, featuring the Cruiserweight and Super-Middleweight divisions. Season 2 started in October 2018 and includes Bantamweight, Super-Lightweight and Cruiserweight. In each weight class, eight elite boxers battle it out in a bracket-style elimination tournament, with four quarter-finals, two semi-finals and one final. This makes for seven top fights per weight class, and a total of 21 fights in Season 2 staged in premier venues around the globe.