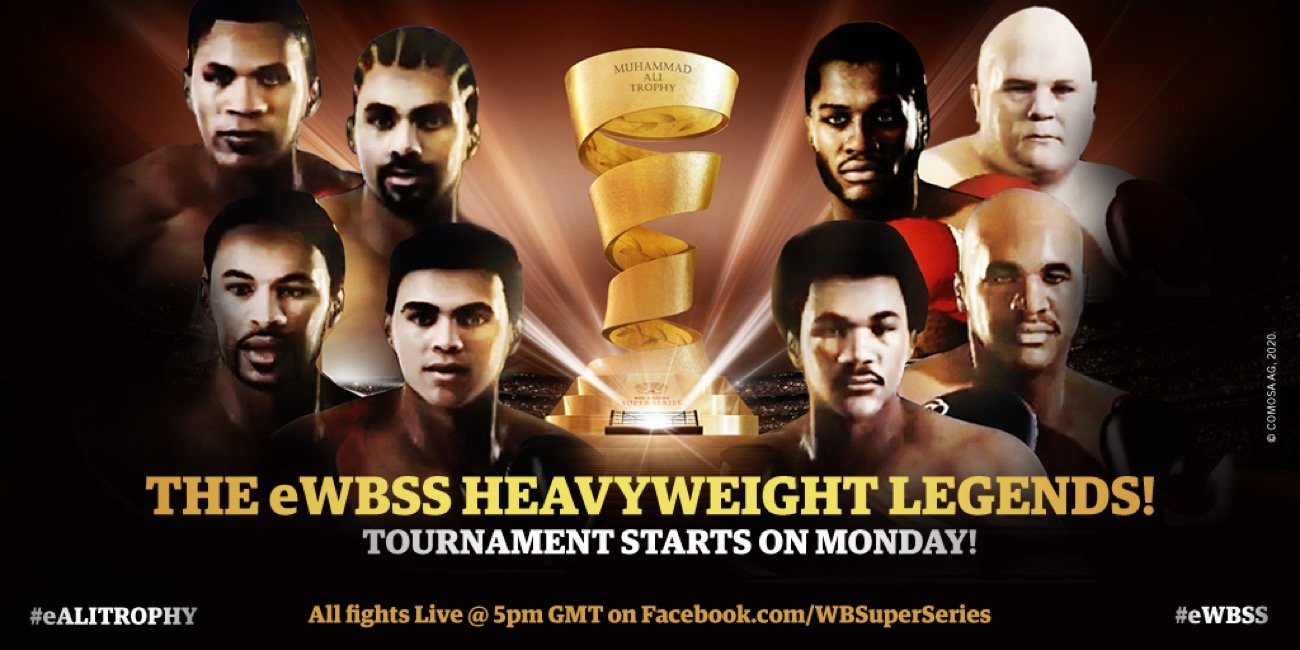 ‘Big George’ Foreman survived a knockdown against David Haye to score a 5th round knockout and sets up a dream semi-final versus ‘Iron’ Mike Tyson in the ‘eWBSS Heavyweight Legends’ tournament.

Britain’s David Haye went toe-to-toe with one of the all time greats in Thursday’s eWBSS quarter-final simulated on EA Sports ‘Fight Night Champion’.

Real-life Haye called it a ‘horrid draw’ in the build-up to the fight and told he would get ‘my tech guy to hack the computer to boost my punch resistance to give me half a chance!’ But despite the concerns, Haye’s eSport character looked strong in the opening of this much-anticipated quarter-final.

’The Haymaker’ got stormed and hit by a huge left in the first round, but not only survived it, he bravely fought back and managed to provide the first knock down when he caught his opponent with a massive right.

The foothold in fight, and potential for sensation, did not last long. Haye’s hopes got crushed after a chess-like fourth round as he got dropped twice in the 5th and out cold with a monstrous vintage Foreman right uppercut.

“Best fight so far!” said Kalle Sauerland, Chief Boxing Officer of the eWBSS. “Both men down, Hayemaker so close to the upset but ended with a trademark Big George finish.”

Mike Tyson lived up to his moniker of the ‘The Baddest Man on the Planet’ in Wednesday’s hotly-anticipated ‘eWBSS Heavyweight Legends’ quarter-final against Eric ‘Butterbean’ Esch as he stopped his opponent in two brutal rounds.

The bout, simulated on EA Sports ‘Fight Night Champion’, saw the eSport’s version of ‘Iron’ Mike Mike charging at Butterbean on the opening bell and hitting him twice with enough power for the referee to step in and count.

Butterbean, known as ‘The King of the 4 Rounders’, did manage to counter a few times in the opening round, but never effective enough to shake the favorite.

Tyson closed the show early in the second round as he threw a brutal left-right combo that dropped Butterbean, who was unable to beat the count. Tyson, the tournament number 2 seed, progresses to the semi-final on Saturday against either George Foreman or David Haye.

George Foreman faces David Haye on Thursday, March 26 at 5 pm (GMT) in the fourth of the quarter-finals of the ‘eWBSS Heavyweight Legends’ tournament simulated on EA Sports ‘Fight Night Champion’.

Following a ferocious seven-round battle in which both fighters rose from the canvas, Joe Frazier knocked out Lennox Lewis in the second quarter-final of the ‘eWBSS Heavyweight Legends Tournament’ to set up Ali-Frazier IV in the semi-finals of the eWBSS.

As all boxing fans know Ali and Frazier met in an epic real-life trilogy ending 2-1 in favour of ‘The Greatest’, but the eSports version of ‘Smokin’ Joe’ has a unique chance to make it even as a result of a stunning eWBSS performance against tournament 3 seed Lennox Lewis.

Despite the fact the eWBSS has only been underway for two days, Lewis-Frazier proved to be a classic for the history books as the heavyweight legends battled for a chance to continue their quest for the eAliTrophy.

Simulated on EA Sports ‘Fight Night Champion’ and with tens of thousands of people watching online from around the world, both Lewis and Frazier went on the front foot straight from the opening bell.

Frazier knocked Lewis down heavily in the first round and was the more aggressive fighter throwing plenty of vintage left hooks in the opening exchanges. Lewis managed to weather the storm and in the following three rounds he started to show his excellent set of skills with beautiful combos that changed the course of the fight – culminating in the fourth when he sent Frazier to the canvas with a brutal body shot.

In the 5th round Frazier, known for his fighting heart, established his hook once again and regained momentum of a highly entertaining give and take knock-down bonanza. Lewis went down for a second time in the 6th, then got dropped twice by uppercuts in the 7th. Lewis rose valiantly from the first but the second carried too much power for ‘The Lion’ to handle.

The three judges all had it 56-55 on the scorecards in favour of Frazier when he put an end to Lewis’ ambitions in the inaugural ‘eWBSS Heavyweight Legends Tournament’.

Simulated on EA Sports ‘Fight Night Champion and with over 150,000 people watching online from around the world, both fighters set off at a frenetic pace and it was Holyfield who was landing the cleaner shots. The Alabama born heavyweight known as ‘The Real Deal’ continued his assault in the second round and landed a lethal combination that rocked Ali.

After a closely fought third and fourth, Ali demonstrated his class and speed in the fifth as he floated like a butterfly and stung like a bee. The brave Holyfield rose at the count of five from a lethal straight right hand from Ali but was unable to survive the round as Ali dropped him once again to win via knockout.

A clearly delighted Ali was ecstatic with his thrilling performance.

“I’m young, I’m handsome, I’m fast. I can’t possibly be beat,” said Ali. “If you even dream of beating me you’d better wake up and apologise!”

eWBSS Chief Boxing Officer, Kalle Sauerland was equally enthused as the Heavyweight Legends tournament got off to a thrilling start.

“What a storming performance by the GOAT!” said Kalle Sauerland. “A scorching first fight to get us underway! Great courage and skill also showed by ‘The Real Deal.’

“Thousands of fans from all over the world were watching the opening of our Legends tournament that takes place while the world of real-life sport is on halt. We’re really happy to be able to give some entertainment to fans who may be stuck at home at this tough time.”

The tournament, simulated on EA Sports ‘Fight Night Champion’, is created to provide some much-needed relief and entertainment for fight fans around the world during these testing times.

The ‘eWBSS Heavyweight Legends tournament’ will be simulated on EA Sports ‘Fight Night Champion’ and they will compete in the traditional World Boxing Super Series format to lift the eAli Trophy.

The entire ‘eWBSS Heavyweight Legends’ tournament will be live-streamed exclusively on the World Boxing Super Series Facebook page at 5pm (GMT) every day from Monday 23rd March until the final on Sunday 29th March.

“In these testing and uncertain times, the world is facing unprecedented challenges as we unite against the coronavirus,” said Kalle Sauerland. “With this ‘eWBSS Heavyweight Legends’ tournament, we hope we can provide a much-needed distraction for fight fans around the world.

The ‘eWBSS Heavyweight Legends’ tournament will be simulated on EA Sports ‘Fight Night Champion’ video game and feature 8 of the most recognisable heavyweight’s from history, including ‘The Greatest’ Muhammad Ali, and they will compete in the traditional World Boxing Super Series format to lift the eAli Trophy!

The ‘roster’ announcement will be made this coming Sunday and the draw will take place on the ‘@wbsuperseries’ social channels on Sunday 22nd at 5pm (GMT).

With this ‘eWBSS Heavyweight Legends’ tournament, we hope we can provide a much-needed distraction for people around the world.