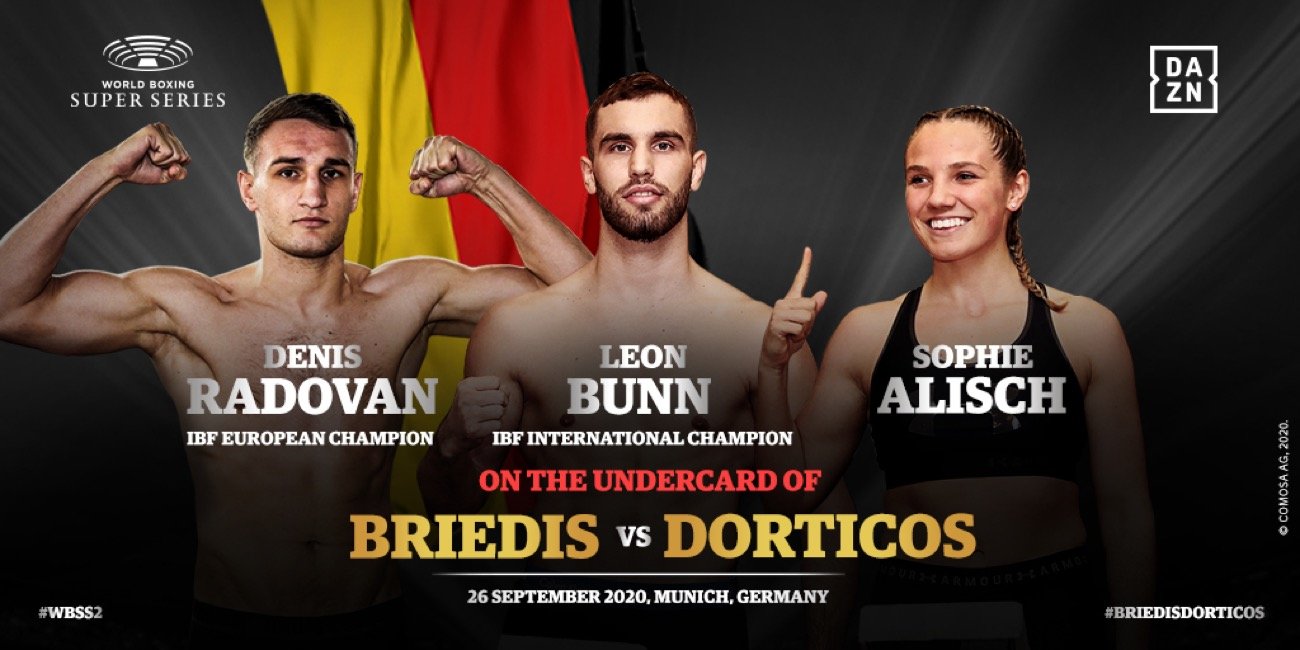 The final will be held in a film studio under Covid-19 rules and with no spectators at Plazamedia Broadcasting Center, a leading live sports production house in Munich.

To watch the final and the undercard on Bildplus German fans need to subscribe to BILDplus on bild.de

“We are very happy to partner with the visited news portal in Germany to deliver a spectacular final to our German fans,” said Andreas Benz, CEO of Comosa, the WBSS organiser. “This is the fifth final in the history of the World Boxing Super Series and the first one to take place in Germany. The Muhammad Ali Trophy is coming to Germany and the fans are in for a treat when the best cruiserweights in the world Mairis Briedis and Yuniel Dorticos battle it out in Bavaria.”

Said Kalle Sauerland, Chief Boxing Officer of the WBSS: “The quest for the Muhammad Ali Trophy, when we set out a couple of years ago with this tournament, was to travel the world with great events.

“On 26 September we are turning Europe’s best film studios into the pinnacle of the boxing world. The final is in the name of Ali, he travelled the world as a fighter, he travelled in the name of boxing and even fought in Munich when he defended the heavyweight title against Richard Dunn in 1976. Both Briedis and Dorticos will do everything to have their name engraved on a trophy that bears the name of the greatest of the sport!”

The final will be shown live on DAZN in the U.S. & Canada, Sky Sports in the UK, and Bildplus in Germany.

Rising Stars to feature on the undercard of Briedis vs Dorticos

Germany’s Leon Bunn (15-0, 8 KOs), Denis Radovan (13-0-1, 6 KOs), and Sophie Alisch (5-0, 1 KO) are confirmed on the undercard of the WBSS Cruiserweight Final between Mairis Briedis and Yuniel Dorticos for the Muhammad Ali Trophy, Ring Magazine belt, and IBF World title at the Plazamedia Broadcasting Center in Munich, Germany on 26 September.

Leon Bunn had a breakout 2019 as he won the IBF International Light Heavyweight title in May before successfully defending his title against world title challenger Enrico Kölling in November.

The unbeaten 28-year-old, ranked number 5 with the IBF and number 11 with the WBO, will be fighting at super middleweight for the first time as he challenges Finland’s Timo Laine (27-13, 11 KOs) across eight rounds.

“I’m really looking forward to fight on such a big event,” said Bunn. “It feels good to be back in the ring and to continue my journey towards becoming a World Champion.”

Also on the card is highly rated IBF European Middleweight Champion Denis Radovan. Radovan claimed two victories last year as he won the IBF title against Ronny Mittag in April before marking his UK debut against Luke Blackledge on the undercard of the WBSS Super-Lightweight final in October.

The unbeaten 27-year-old will be defending his title against tough Polish middleweight Robert Talarek (24-13-3, 16 KOs).

“It’s an honour to showcase my talent on the biggest boxing tournament in history,” said Radovan. “I seriously can’t wait to hear that bell ring so I can do what I do best. I’m pumped and ready to bring the heat!”

One of Germany’s most exciting prospects Sophie Alisch will be fighting for the first time in 2020, as the 18-year-old known as ‘Die Zukunft’ (The Future) returns to the ring following her unanimous decision victory over world title challenger Irma Adler in November 2019.

Alisch it aiming to impress as she faces another former world title challenger in Edina Kiss (15-13, 9 KOs).

“It’s a great honour for me to be fighting on a prestigious and global event like the World Boxing Super Series,” said Alisch. “I am looking forward to continuing my development. If everything works out well I want a title fight in 2021!”

The hotly-anticipated World Boxing Super Series Season II Cruiserweight Final will be held on 26 September in a film studio under Covid-19 rules and with no spectators at Plazamedia Broadcasting Center, a leading live sports production house in Munich.