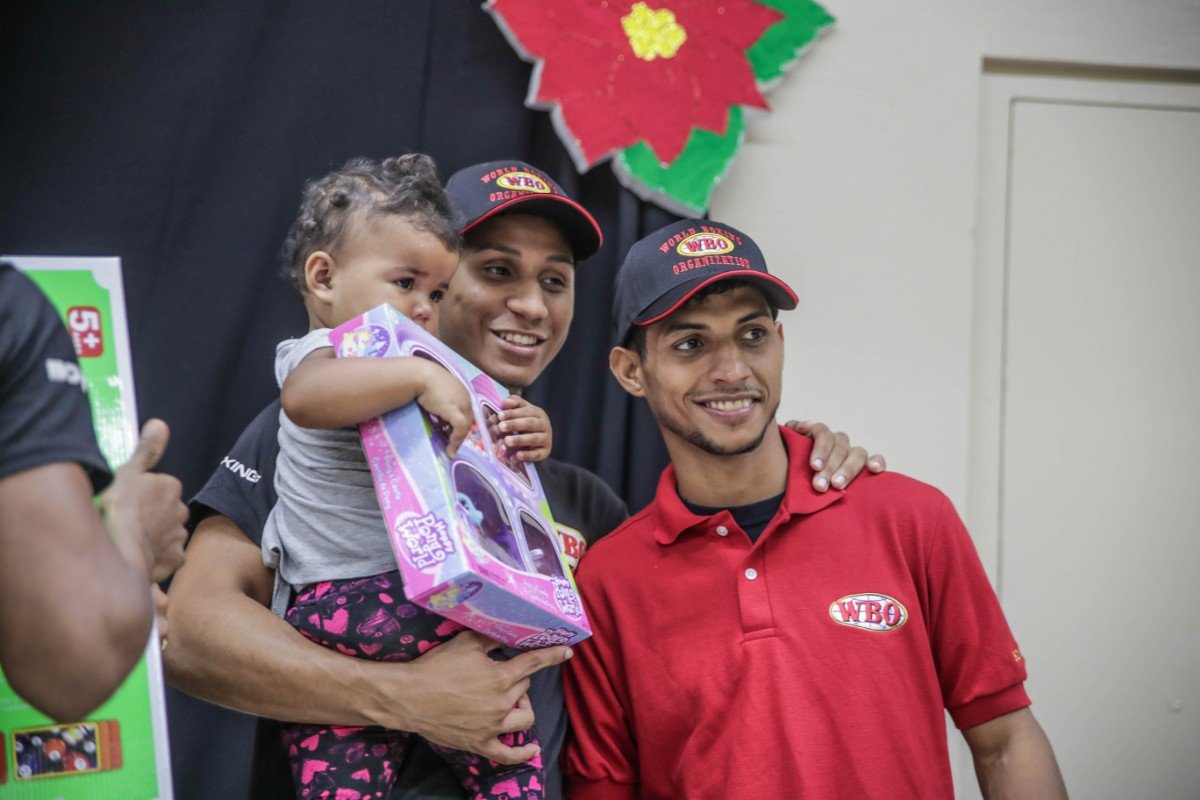 With its consistent social commitment, the World Boxing Organization (WBO), chaired by Francisco “Paco” Valcárcel, Esq, and through the program WBO Kids Drug Free, brought joy and gifts for the children of the ‘Educational Center: Play, Explore & Learn’ and ‘Hacienda Don Antonio’. Both centers are located in the city of Aguas Buenas.

During the busy event that took place in the municipal boxing gym of Aguas Buenas, the children received backpacks with school supplies and sporting goods. Also, motivational speeches were given, bicycles were raffled, and lunch was served for them.

“We have no words for what the WBO did for our city. It was the second time this year our children saw the WBO visiting and helping us. In the future, this will reflect on their lives. Our gratitude is infinite. Thanks Paco, for this gesture of love”, said the mayor of Aguas Buenas, Javier García Pérez.

“Thanks to the mayor for putting the sport of his city first. These activities serve to motivate, but the most important thing is that we have to be consistent in maintaining that. This isn’t done overnight; this is a process that we work with a lot of love and in the long term, we see extraordinary results”, Valcárcel said.

In an emotional and busy Christmas activity, the World Boxing Organization (WBO) and its president Francisco “Paco” Valcárcel, accompanied by former world champions, prospects, WBO World Jr. Flyweight Champion Ángel Acosta, regional champions, and other figures of the sport were delivering gifts to children at the Sor Isolina Ferré Center in Ponce, as part of the successful world ‘WBO Kids Drug Free’ program.

An emotional Sister Mildred Vázquez, Spiritual Director of the centers of Puerto Rico, said: “The WBO and Paco Valcárcel have been committed to us for around 20 years. There are many gifts that will be distributed to the other centers that we have in Puerto Rico. Since day one, which was a long time ago, I remember that Paco told us that the WBO was never going to forget us. His deed is very important for all of us. We will never forget the great help you gave us then Hurricane María hit us hard; we are very grateful”.

The world champion Ángel “Tito” Acosta said: “Many children left happy with their gifts and bicycles. I always tell the youth that they have to get away from the streets to concentrate on their studies”.

About the Sor Isolina Ferré Center:

CSIF has contributed to the well-being, security and socioeconomic development of Puerto Rico since its foundation 49 years ago at the Ponce Beach by Sister Isolina Ferré, MSBT. Its corrective programs and prevention, human development and community development provide solutions to address problems such as school dropout, violence, and unemployment and the economic crisis. The different programs and services are offered in 24 towns of the Island, including regions of Ponce, Guayama, San Juan, and Canóvanas, among others.