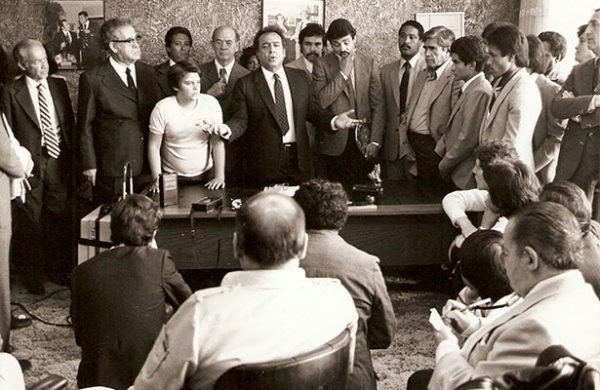 Invariably, all the conversations in recent months touch on the topic of the pandemic and the harsh effects it has had on the world and our very lives.

It is very common to hear “how life has changed” or “we are living in a different world.”

Putting aside the pandemic, the reality is that we actually live a very different life than the one we knew. Those from my generation grew up in a much different environment, we grew up even more differently from that of my parents’ generation.

I was born when the fax did not exist and today it has disappeared. There was no email, cell phone or social media. I was born with music played in albums, then cassette tape arrived, the Betamax or VHS, then the CD and then the DVD replaced everything. Today none of those are needed nor used to listen to music.

The social dynamics were very different. We played in the street, came and went to the park or to friends’ houses without anyone having to worry about our security. Back then teachers had all the power and ruled and had absolute authorization from the parents to act firmly.

At the Sulaiman house, Doña Martha, (my mother) even to this day, absolutely rules, she is the one in charge; It only takes her to raise an eyebrow to make us freeze, when it happens, we know we are in trouble! She dedicated her life to educate us children to be respectful.

That life that I knew has forever changed, not because of the Covid pandemic, it was the natural evolution of humanity. Is it my children’s fault that they are so different from the way I was? No. It is not anyone’s fault, as this is the reality to which we must adjust, life has been changing constantly and rapidly. Currently, it is the child or teenager who is in charge at home, it is the kids who rule in the classroom.

Sports have also changed in all aspects. The love and loyalty to the jersey no longer exists. It is increasingly rare for an athlete to make his entire career with the team of his love. My father used to mention it constantly, before boxers used to ask “who am I fighting against?” Now they ask “how much are they going to pay me?”

Mr. Money rules. It is wrong? No, it’s just the way that things are today. For decades, professional sports was an activity with great popularity that gave excitement to fans, while it evolved to become a wealth-generating industry.

For many years the sport depended on the box office, the athletes’ salaries were moderate and in the vast majority of cases moderately basic, so they were played for the love of the sport. Then came radio, television and pay-per-view! Today digital platforms are also being added. The sports industry is one of the most powerful and far reaching in the world. There are more and more millionaire athletes and in general, today, the athlete is the boss.

Perhaps this pandemic, and the adjustments that it is forcing us all to make, will manage to return some lost values to our homes and why not, also to the sports industry.

Did you know?
The first million dollar box office was generated in boxing. It was on July 2, 1921 in New Jersey when world heavyweight champion Jack Dempsey defended his title against Georges Carpentier for a box office of $1,800,000. This figure`s comparability, adjusted to 2020, is above 50 million dollars, thus being one of the 3 highest grossing in history, behind Floyd Mayweather vs. Pacquiao and vs. McGregor.

One of Don José’s favorite boxers was Ken Norton because of his loyalty to the sport and his dream of becoming a WBC world champion.

Norton fought three times against Muhammad Ali: a victory, a draw, and a controversial, close decision loss for Ken. Eventually in 1976, Norton earned the position of mandatory challenger for champion Ali. But in February, 1978, Leon Spinks provided an extraordinary surprise and defeated the legendary champion. My dad used to proudly recount what happened, then “We ordered the mandatory Spinks vs. Norton fight, but the promotion wanted to have a rematch with Ali.”

“They offered Ken Norton 500 thousand dollars to accept as a “step aside” and he said NO, I want the championship, then they offered him 120 thousand dollars purse to fight against Spinks (thinking that then he would accept the step aside) but he accepted those terms and signed the contract, The very next day the promotion announced the Spinks vs. Ali rematch.”

It was then that the World Boxing Council ordered the fight for the vacant title, and thus Ken Norton became WBC heavyweight world champion. Glory over money, and for that reason he kept a very special place in my dad’s heart