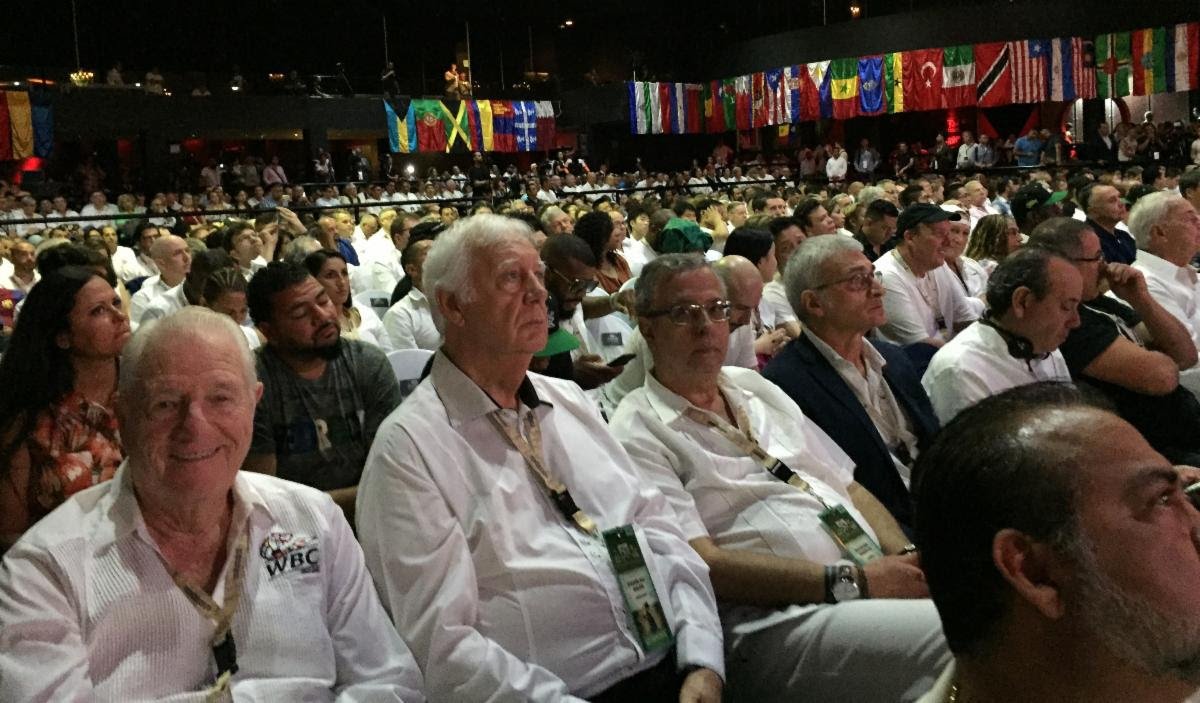 The 57th annual WBC convention opened this morning at the Grand Oasis Cancun, a spectacular tropical resort located on the northeast coast of the Yucatan Peninsula on the Caribbean Sea. A huge crowd estimated at 1,500 or more packed the assembly room and included a dazzling group of current and former world champions, Hall of Famers and ring legends, as well as prominent promoters, managers, commissioners, ring officials, medical officials, media, and fans from around the world.

WBC President Mauricio Sulaiman, pictured with his wife, Christian, opened the convention by welcoming WBA President Gilbert Mendoza and WBO President Paco Valcarcel, both of whom are in attendance, and said, “This convention is a great demonstration of unity. We need unity in the sport. We need to show what boxing is all about, and leave the fights inside the ring. Welcome to the WBC convention, and thank you for being here. I’m truly honored on behalf of the WBC, and we fully support this gathering together of our organization.”
The WBC Vice Presidents were introduced: Bob Logist of Belgium, Charles Giles of Great Britain, Houcine Houchi of Tunisia, Kovid Bhakdibhumi of Thailand, Alberto Guerra of Panama, Mauro Betti of Italy, and Rex Walker of the U.S.A.

Federation Presidents Peter Abdool of FECARBOX, Duane Ford of the NABF, Vladimir Laptev of CISBB, and Hiroshi Akuyama of the OPBF were also introduced, as well as International Secretaries Malte Muller-Michaelis of Germany, Frank Hadley of Australia, Jill Diamond of the U.S.A., Miguel Angel de Pablos of Spain, Abraham Mitra of the Philippines, Michael George of the U.S.A., Patrick Cusick of Thailand, Oksana Semenishina of Lithuania, Peter Stucki of Switzerland, Tsuyoshi Yasukochi of Japan, and Simon Block of Great Britain.

WBC super lightweight world champion Jose Ramirez and former six-division champion, now promoter, Oscar de la Hoya addressed the assembly, and a special show of appreciation was given to promoter Pepe Gomez of Cancun Boxing for his major contributions in organizing this convention.

A video of the members of the boxing community who passed away in the last year was shown with a special tribute to Alberto Reyes of Cleto Reyes boxing gloves, and the final 10-count for all was tolled by former three-division champion Abner Mares.

The Lifetime Achievement Award was presented to Duane Ford.

An “adaptive boxing” exhibition was held between boxers in wheelchairs, one of whom was Chris Middleton of England, who lost both of his legs in Afghanistan.
A special video tribute showing highlights of his career followed by a performance by a Mayan dance troupe was given to the legendary former three-division world champion, Julio Cesar Chavez.

Seminars for ring official and WBC affiliated federations were held in the afternoon.

Major topics, as well as the judges’ certification seminar, workshops, and confederation meetings are planned for Tuesday’s assembly meeting.

Ratings and mandatory title defenses are planned for Wednesday