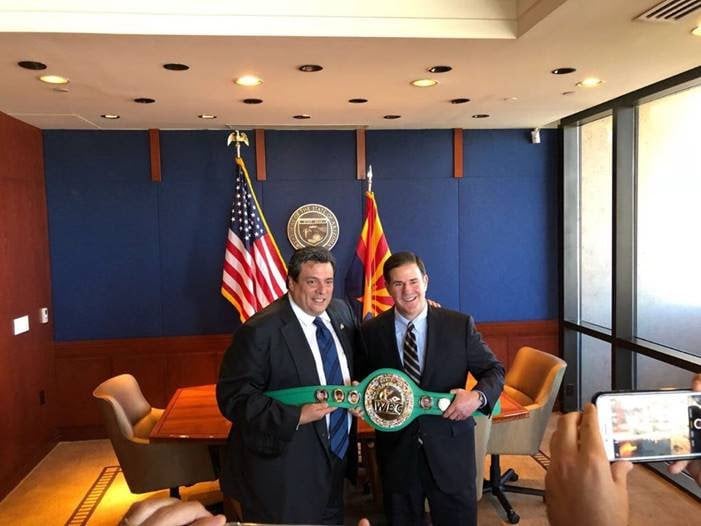 Mauricio Sulaiman, from Mexico, President of the World Boxing Council, just returned from a very successful trip to Arizona. Precisely on the 45th Anniversary of national hero, Senator John McCain’s freeing as a prisoner of war, Sulaiman held a variety of meetings to present the WBC’s social responsibility programs in the state.

Mauricio Sulaiman met with Arizona Governor Douglas Ducey and recognized Governor’s relentless campaign to build bridges us inclusion and the specific activations with inmates to provide them alternatives to prepare their return to society after their relase from prison.

Governors Ducey and Sulaiman will plan to bring a major championship fight to the State in the near future.

A meeting with Sheriff Paul Penzone and his staff was highly productive and the WBC will prepare several actions as programs that could be implemented for the youth of the county and the state, as well as specific programs for the prisons.

A surprise visit to the Arizona Diamondback’s spring training in which he met President Derrick Hall, who invited Sulaiman to throw the first pitch in the game versus Cincinnati Reds.

To close the day, Mauricio Sulaiman and the author of the book “Ring, Boxeando por la Reincersión”, Dr. Eunice Rendon, presented this special piece, which serves as a success model on how boxing can change the lives of prisoners through a methodology with sports edition and psychology.

This event was attended by many members of the society, representative groups and the boxing community of Arizona. Future champion Sulem Urbina shared her life experience with the audience with a highly inspirational message which brought many to tears.

The WBC will continue to work with Red Viral and with CleVer International Solutions and its President Cesar Verduzco to present a variety of options of programs that can be executed with important results in the State of Arizona.

The WBC social responsibility is a top priority and has been of great success all around the world with the WBC Cares Program and specific one like “2N1D” (Two Nations One Dream, Fighting for Peace), BoxVal, (Boxing for Peace); Ring, Boxing for Reinsertion, etc.