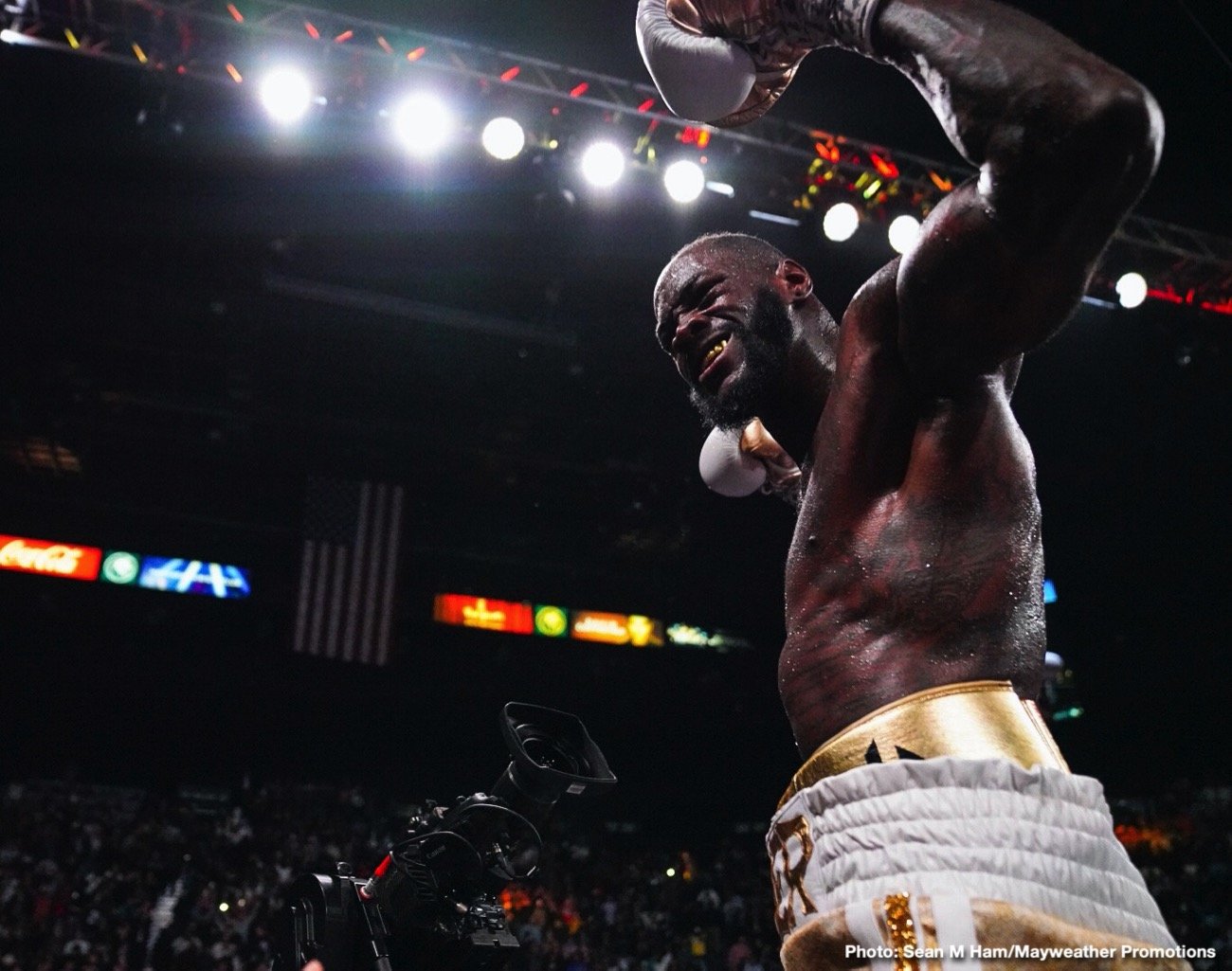 As per the goal to provide full disclosure and transparency, the WBC posts the status of each division quarterly. The first paragraph of each weight category, written in bold letters, is the order in which The WBC Board of Governors voted in the open floor meeting during the annual convention on October 22, 2019. What has happened since the convention is listed in bullet points.

Wilder is scheduled to make a voluntary title defense on November 23 against No. 3 ranked Luis Ortiz of Cuba. The WBC has also approved the rematch against No. 2 ranked Tyson Fury of Great Britain to be held in 2020. Charlie Giles petitioned Fury to be mandatory to comply with the WBC rules, because Dillian Whyte’s situation is uncertain and is handled by a UK government agency (UKAD). No. 1 ranked Dillian Whyte’s situation is in process with UKAD and Whyte’s representatives, and with the WBC. If his situation is resolved, the WBC will continue to recognize him as Interim champion, and he will become the mandatory challenger for February, 2021.

· Wilder defended his title by KO7 against Ortiz.
· Dubois vs Fujimoto for WBC silver December 21 in UK.

The WBC approved No. 1 ranked WBC Silver champion Ilunga Makabu of Congo vs. No. 2 ranked Krszysztof Glowacki of Poland for the vacant world championship. WBC Diamond champion Mairis Briedis of Latvia is scheduled to fight IBF champion Yuniel Dorticos of Cuba, with the date to be announced as the final of WBSS.

· No. 2 Glowacki and No. 3 Lerena confirmed to the WBC their unavailability and the WBC voted in favor of approving Makabu vs Wlodarczyk for the vacant title .
· Dennis Lebedev will fight Mchunu on December 21 for the WBC silver title.

WBC and IBF champion Beterbiev will first make his IBF mandatory defense against IBF mandatory Meng Fanlong of China. Fanlong is also ranked No. 15 by the WBC, and there was a request from the promoters that the fight also be for the WBC title. The fight between No. 2 ranked WBC Silver champion Jean Pascal of Haiti/Canada and No. 6 ranked Badou Jack of Gambia/Sweden will determine the WBC mandatory challenger and will fight for the championship next.

Benavidez will make his mandatory defense next against No. 1 ranked Avni Yildirim of Turkey. WBC Diamond champion Callum Smith of Great Britain is also the WBA champion, and is scheduled to defend the WBA title against John Ryder of Great Britain on November 23. WBC President Mauricio Sulaiman made a provisional request that the winner of Benavidez vs. Yildirim be allowed one voluntary defense and then confirm Smith as mandatory challenger, once the matter is cleared with the WBA and Callum Smith.

· WBA has confirmed that they will respect the WBC ruling and will collaborate in reciprocity.
· Callum Smith defended his title on November 23 and is now confirmed as mandatory to the WBC title as per the conditions described above.

Alvarez is scheduled to fight light heavyweight Sergey Kovalev on November 2. Charlo is scheduled to make a voluntary title defense against No. 5 ranked Dennis Hogan of Ireland/Australia on December 7. There is a pending administrative situation with Daniel Jacobs. The WBC will wait for two weeks after the December fight to address the mandatory situation with Matchroom Boxing.

After Convention facts:
· Alvarez knocked out Kovalev in 10 rounds.

Harrison is scheduled to fight No. 1 ranked Jermell Charlo of the U.S.A. in December, with the date to be announced. A final eliminator to determine the mandatory was approved between No. 2 ranked Erickson Lubin of the U.S.A. vs. No. 3 ranked EBU champion Sergio Garcia of Spain.

WBC-IBF champion Spence will first make his WBC mandatory defense against WBC No. 1 ranked Silver champion Danny Garcia of the U.S.A., and make his mandatory IBF defense next. WBC is waiting for Spence official medical clearance.

Ramirez will make his mandatory WBC defense against No. 2 ranked Viktor Postol of Ukraine, with the purse offer scheduled for Monday, October 28, at the WBC office in Los Angeles. WBC Diamond champion Regis Prograis of the U.S.A. is scheduled to defend the title against No. 1 ranked Silver champion Josh Taylor of Great Britain on October 26.

After Convention facts:
· Ramirez will fight Postol in China on February 2.
· Prograis lost to Josh Taylor in the final of the WBSS.

Lomachenko was designated WBC Franchise champion today, and WBC interim champion Haney of the U.S.A. was elevated to world champion. The fight on November 2 between No. 5 ranked Javier Fortuna of Dominican Republic and Jesus Cuellar of Argentina was approved as a final eliminator to determine the first mandatory challenger.

After convention facts:
· Fortuna defeated Cuellar and is now mandatory for Haney.

Berchelt is scheduled to make a voluntary defense against No. 4 ranked Jason Sosa of the U.S.A. on November 2. The fight on November 30 between No. 1 ranked Oscar Valdez of Mexico and No. 7 ranked Andres Gutierrez of Mexico was approved as a final eliminator to determine the mandatory challenger. The mandatory is due, and the winner of Berchelt vs. Sosa must fight the winner of Valdez vs. Gutierrez next.

After convention facts:
· Berchelt defended his title with a TKO4 win.
· Gutierrez didn’t make weight, and the WBC approved the replacement. Valdez won in 7 rounds and is now mandatory for Berchelt.

Vargas made a mandatory defense on July 13, 2019, and is currently in a voluntary stage.

Bantamweight: Champion Nordine Oubaali (France)
Oubaali won the vacant title and is required to make two mandatory defenses. The first is scheduled for November 7 against WBC interim champion Takuma Inoue of Japan. No. 1 ranked mandatory challenger Luis Nery of Mexico has accepted a fight against No. 5 ranked Emmanuel Rodriguez of Puerto Rico on November 23. The winners of both fights must fight next.

After convention facts:
· Oubaali successfully retained his title.
· Luis Nery didn’t make weight and his fight was cancelled. The WBC will decide on the mandatory status in the near future.

Estrada is scheduled to fight WBA champion Kal Yafai of Great Britain in a unification bout in January, with the date to be announced. No. 1 ranked Srisaket Sor Rungvisai of Thailand was approved as the mandatory challenger.

Flyweight: Championship Vacant
No. 1 ranked Julio Cesar Martinez of Mexico is scheduled to fight No. 2 ranked Cristofer Rosales of Nicaragua for the vacant title on December 20. A final eliminator was ordered between No. 3 ranked Junto Nakatani of Japan and No. 4 ranked McWilliams Arroyo of Puerto Rico to determine the first mandatory challenger.

Light Flyweight: Ken Shiro (Japan)
Shiro is scheduled to fight IBF champion Felix Alvarado of Nicaragua in a unification bout on December 23. Shiro made a mandatory defense on July 12, 2019, and is currently in a voluntary stage.

Minimumweight: Champion Wanheng Menayothin (Thailand)
Menayothin is scheduled to make a mandatory defense against No. 1 ranked Simpiwe Koncko of South Africa on October 25.

After convention facts:
· Menyothin retained his title via unanimous decision.