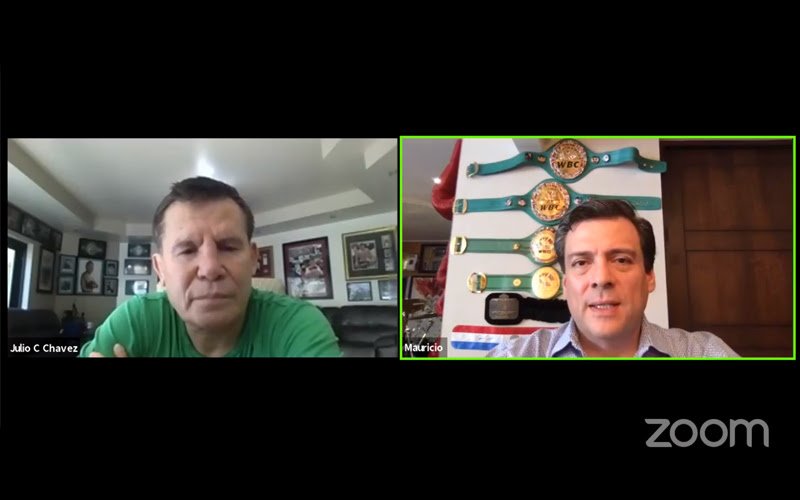 I had the great pleasure of holding talks, one on one, with two all-time Boxing Greats … Julio César Chávez and Sugar Ray Leonard … during the dynamics called WBC Talks, which are done through the WBC University with the support from LiberQuaré.

These are informal conversations, totally relaxed, and in which we simply remember the courses, passages, and routes of their lives inside and outside of the ring.

We have selected photographs that, when put on screen, generate considerable interest and nostalgia in our champions, facilitating the flow of the conversation, opening the floodgates of memories and pride of these great champions.

Sugar Ray Leonard told us about his childhood and how the relationship with his parents was what gave him the strength plus resolve to be a winner.

His father was a hard-working man, uneducated as he dropped out in sixth grade, who dedicated himself to ceaselessly striving from dawn to dusk to provide for his family: “He never gave up, and he was always there for us.”

And he recounted how his mother’s determination was what kept the fighting spirit in his family.

Sugar Ray lost his dad last year, and his mother is 91 years old. She is the one who chose his name: Ray Charles Leonard, based on the legendary singer Ray Charles.

Leonard brilliantly and masterfully conquered Olympic glory in Montreal 1976, yet he did not want to make the leap to professionalism. Rather, he wanted to study at the University of Maryland. But the need to support his parents led him to make the decision that would forever change his life, and the very destiny of the sport.

Ray won The WBC world welterweight championship from Wilfredo Benítez in an epic battle, a 15 round decision; He fought the best and had great fights against legendary boxers in what is known as the Golden Age of boxing.

Julio César Chávez generously shared a lot of anecdotes. He wooed, who would eventually become his wife, Amalia. He took her to Mazatlán, but suddenly police came looking for him, and he thought they were going to arrest him … but no!

The policemen searched for him because the news had just arrived that he was going to fight for the world title against Mario “Azabache” Martínez. The honeymoon had to wait. It was put on hold until he extracted himself from this clinch. J.C. got on a plane for the first time and went to sign the fight with Don King, and from there to the training camp.

Julio is the greatest Mexican fighter of all time. When he fought, the country ground to an expectant standstill. He made many millions of dollars, had private planes, yachts, all kinds of luxuries, and it was dramatic to hear that he never felt fulfillment.

Julio fell into addictions: “I have lost many material things, but I have never lost something which is by far the most precious one, the affection of the people. That is what keeps me clean, I cannot fail them, and I will never relapse.”

Julio dedicates everything to his rehabilitation clinics. He transformed his Culiacán mansion into the Baja del Sol Clinic, where he cares for hundreds of people each year. These have the highest percentage of effectiveness in rehabilitation, and the lowest in recidivism.

He was always a great athlete. As a young man, he went to a national sports competition and became champion in soccer and baseball, but he lost in boxing! It was then and there that he decided to abandon amateur boxing and rise to professionalism.

One of the most special days of his life was when the Big Three met for the first time: Hugo Sánchez, Fernando Valenzuela, and him.

The three had never been together simultaneously, and it happened during the great “Heroes of Mexico” tribute, which finally happened. They talked, laughed, and a great friendship was formed between them.

Julio César Chávez and Sugar Ray Leonard shared with Mike Tyson the WBC Fighter of the Year designation in 1988. In a historic event in New York, the three were awarded by José Sulaimán, side by side.

Today’s anecdote
Sugar Ray Leonard had retired for five years, without a fight, following a detached retina. He called my dad and asked him for the opportunity to challenge the great champion of that time, Marvin Hagler.

The WBC ordered a series of thorough medical studies and the evaluation of two different ophthalmologists. That was the condition to be able to accept Leonard’s request.

In the face of media criticism, especially in the U.S., he was authorized to fight. My dad suffered a storm of criticism in the months before the show; he was even called a “murderer” by Larry Merchant, who was one of the most vocal and voracious critics at the time. Sugar Ray Leonard beat Hagler by 12-round decision, and one of the glorious chapters in the story was written.

Don José was the last to leave Caesars Palace arena; He stood there alone, reflecting and highly satisfied, as well as proud that Sugar Ray did not let him down.

Thank you. I accept any comment, idea, or recommendation at contact@wbcboxing.com.