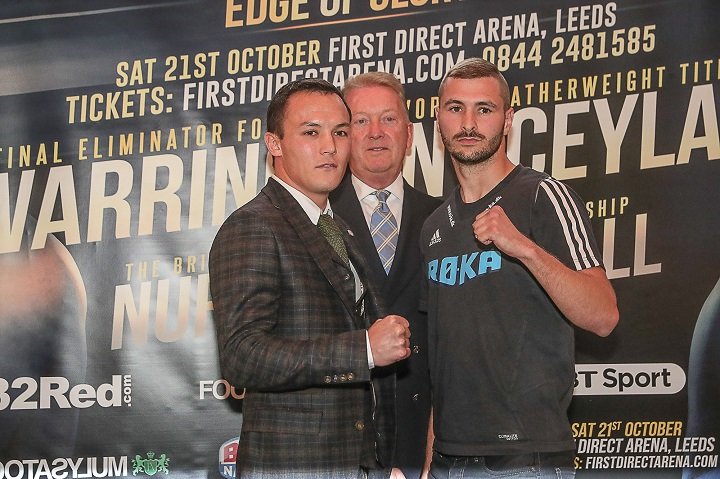 Josh Warrington and undefeated Dane Dennis Ceylan came face-to-face for the first time at a press conference in Leeds today ahead of their mandated Final Eliminator for the IBF Featherweight World title at the First Direct Arena on Saturday 21st October, live on BT Sport and BoxNation.

Huddersfield’s British Super-Lightweight Champion Tyrone Nurse and undefeated Chorley star Jack Catterall were also in attendance ahead of their highly-anticipated showdown, as well as Manchester Super-Featherweight talents Zelfa Barrett and Chris Conwell ahead of their Vacant English title battle.

Below are are selection of quotes from the press conference:

“It is good to be back! I’m hungry for this. It is going to be another cracking show on October 21. There is some real talent fighting on the undercard including all of the lads sat up here with me.

“It is exciting. There has been a lot going on behind the scenes in trying to make big fights happen. I’m knocking on the door for a World title. After I win on October 21st I can’t be denied a shot at the IBF title. Dennis is holding the keys, I’m taking those keys off him and going through the gate and then the World title is on.

“A lot of stuff has been made over the last 12 to 18 months of me avoiding Selby or not wanting the Selby fight. There’s no other way of beating around the bush, It’s a load of rubbish.

“I have wanted that fight since day one. I’m coming for you Lee, you are going to be in a position where you can’t avoid me and that’s that. Believe what you want to believe, you will see when I pick that World title up over my head.

“Josh has got my respect. I take my hat off to him. He has fought a lot of good fighters and beaten them all. I’m looking forward to fighting him in his backyard here in Leeds.

“I will not beat him,” said Ceylan, amid confused looks from those in attendance. “He is too good. Look at my arms, how skinny they are, how should I beat him? He’s a great fighter.”

“I’ve watched the last couple of Tyrone’s fights and he hasn’t been impressive but I’ve watched him over the years and I know he will be training hard and preparing well for this fight. More than anything, I believe in my ability and on October 21st I’m coming to take that title. We’ve had plenty notice for the fight and we’ve been preparing hard.

“I’m coming to knock him out, I’d be a fool not to. I think more so for the fans, everyone wants to see the knockout. If I can’t knock him out I’ll beat him over the 12 rounds.”

“Chris is going to bring his A game but I believe in what I am going to do. I’ve had a lot of learning fights, they’ve been against very tough and durable opponents. After I beat Chris I will be ready for anyone and everything.

“I respect every fighter massively. I’d never underestimate anyone, I’m a smart man. Chris has a lot of heart and he trains hard. We are both from Manchester and we can both fight, there is a lot of pride on the line. I’m training like this is a World Title fight.”

“I’d like to thank Frank Warren for putting me on this massive bill in Leeds. I’m excited about it. I’ve known Zelfa a long time, we’re actually good mates really! I respect Zelfa and his team. Come fight night it is down to business. We both want that English title and the best man will win. I’ll be ready on October 21st.”

“Dennis is a fine fighter, he’s a former European Champion. We managed to get the IBF to agree to this final eliminator. Josh has got to get through Dennis, it is a tough fight but Josh is determined. He needs to get to the next level. If Josh comes through this fight Lee Selby will have nowhere to go.

“We are behind Josh as we said from day one, we are behind boxing in Leeds and we are here to deliver what the fans want. We have given Josh the opportunity, it is now down to him to get in the ring and make it happen.

“Tyrone Nurse is a great professional and very solid. Chris Aston has done a fantastic job with him over the years. He is a difficult fighter to beat. Jack Catterall is the young kid on the block, he is at the stage of his career where he needs these type of fights. I have high hopes for him. For me, we are going to see what he has got on October 21st. This is the fight where we see if Jack is the real deal or not.”

Further exciting fights will be announced in due course.