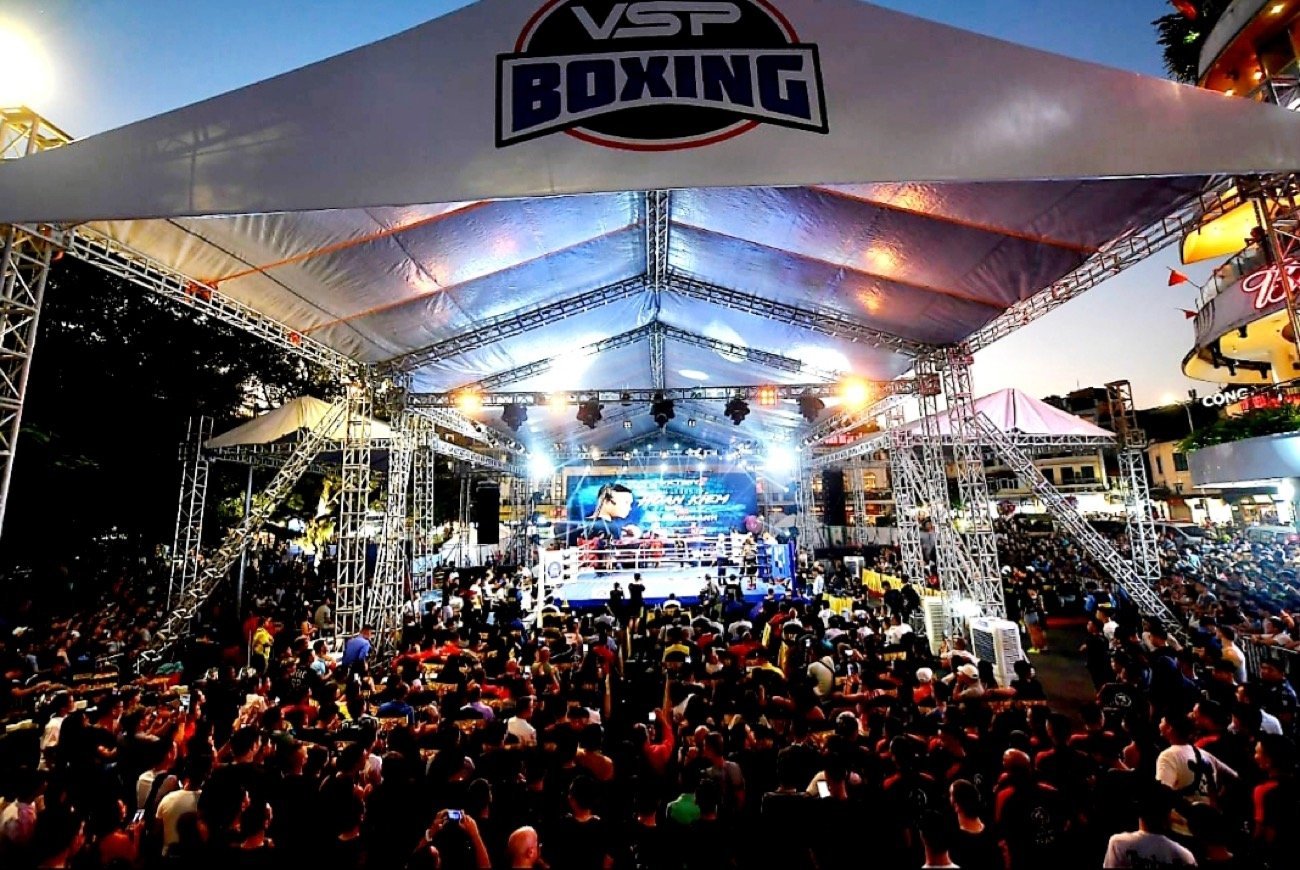 Boxing event organizers Victory 8 produced a Facebook post today entitled “This is Vietnam boxing!” The post showed crowd shots from their third and most recent event held in Hanoi. The pictures are telling and endorse their narrative. At an iconic outdoor location, pitched beside the mystical Lake of Hoan Kiem, sit 25,000 fiercely nationalistic Vietnamese with big smiles on their faces. They are watching boxing. Who knew Vietnamese could box? Well till now, not many!

Vietnam boxing had existed only in the amateur format till very recently, and whilst the country has historically produced good athletes, results on the international stage have been very limited due to lack of opportunities to compete. VSP Boxing was established in early 2019, to provide a world-class training amenity for young talent, and to provide promotional assistance to fighters in Vietnam and beyond. The results so far border on the unbelievable, and importantly, the people of Vietnam are rapidly morphing into fans of the sport. Metrics provided by Victory 8 show that in their debut year, their boxing matches and associated stories were watched by over 20 million people both on television and online. These sorts of numbers are sure without precedent.

2019 heralded the advent of the first “legitimate” professional boxing bouts to be held in Vietnam. It was a landmark for the sport in this country, and it was capped by local champion Truong Dinh Hoang competing for a WBA Asia title. Despite the fact that he had only 3 professional fights, TDH was given a special exception to contest the title, due to his outstanding amateur record. The star Viet had won 11 successive national championships and had scored Gold for Vietnam at the 2015 SEA Games. In what was a dominant performance, Truong Dinh Hoang secured the WBA title by shutout in front of a huge and patriotic crowd. He has since gone on to successfully defend the title in Manila.

VSP Boxing is fast-tracking Vietnamese warriors by giving them what they desire most – competition! And the results speak for themselves. At their most recent Victory 8 show in Hanoi, they handed local Vietnam boxers what would be considered impossible assignments by world standards. In exhibition matches, Vietnam debutants were lined up with largely unbeaten pros, many being belt holders with up to 20 wins to their credit. The Vietnam fighters were outstanding and won 8 of the 12 highly competitive and combative matches. This “throwing the child into the ocean” approach is yielding spectacular results, and none more so than VSP prodigy signing Nguyen Van Duong. This Hanoi son scored a superb win at Victory 8, shutting out Philippines strong man and unbeaten belt holder Jenel “The Demolition Man” Lausa. He then took that confidence to his training camp in Thailand, where he was sent to prepare for the Olympic qualifiers. At fight camp, he knocked cold three quality Thai opponents, and put another two on the canvas. He took this destructive mindset to Jordan, where he blasted through his two qualifiers by emphatic stoppages. The wins secured Nguyen Van Duong a spot at the Tokyo Games, and in doing so, became the first Vietnamese since 1988 to go to the Olympics. This feel-good story understandably made huge news in Vietnam.

VSP Boxing has already earmarked other potential signings. “ We picked Duong out as one of many talented fighters in Vietnam. He was only 21 but showed he had the makings of a good pro. We have recently signed Nguyen Van Hai also, and he will contest the WBC Australasia title at only his fourth pro fight. We are not worried about that, as Hai is one of the smartest and most experienced amateurs in Vietnam. We are looking to sign more fighters by the end of the year, and the interest from fans and potential sponsors for fighters and events is really starting to build in Vietnam. It is really encouraging.” said Mr. KP Singh, General Manager at VSP Boxing. “We are fortunate to have an excellent gym facility here in HCMC, and also, we have the help of our very good friends at Saigon Sports Club. They are great and long time supporters of Vietnam boxing, and for those that haven’t been to SSC, I encourage you to go. It is truly the greatest boxing and fight gym I have seen anywhere in the world. We are equally blessed for access to talented fighters. There are many in Vietnam, and we have a close relationship with Elorde group in the Philippines. We are hugely impressed by the Pinoy fighters, they have some of the most dynamic and entertaining boxers, and we have been very lucky to have them create some great matches for us at Victory 8. They are great people too, very respectful and humble, and always great fun. We have all the ingredients here to make Vietnam not just a boxing entertainment hub for Asia, but I really believe that the best fighters in the world will come to visit us before long. We are striving to make this boxing a real sport again, and make the experience for the fighters in Vietnam one that they will treasure forever.”