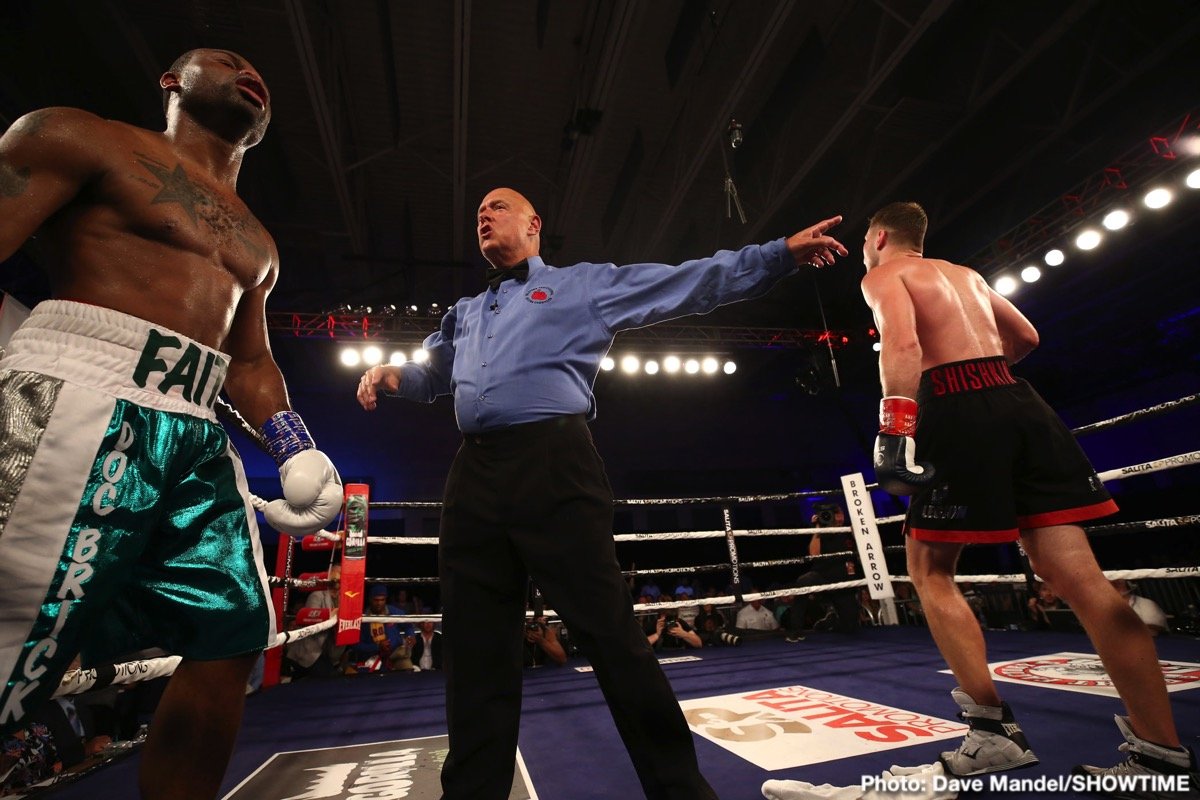 Three talented, undefeated prospects will put their unblemished records on the line in the 250th edition of ShoBox: The New Generation, the prospect-oriented series that has featured 81 future world champions, Friday, January 17 live on SHOWTIME (10 p.m. ET/PT) from WinnaVegas Casino Resort in Sloan, Iowa.

In the 10-round main event, Vladimir Shishkin (9-0, 6 KOs), the fast-rising super middleweight prospect currently ranked as the WBC No. 12 contender, will return for his second consecutive test on ShoBox against the unbeaten Ulises Sierra (15-0-2, 9 KOs).

Tickets for the event, which is promoted by Salita Promotions, start at $20 and are on sale now at www.WinnaVegas.com.

“Vladimir Shishkin was a stellar amateur with over 300 bouts. We believe he is destined to become a world champion,” said Gordon Hall, who has been the Executive Producer and steward of ShoBox: The New Generation for all 19 years and 250 editions of the cornerstone boxing series. “Shohjahon Ergashev was on prospects to watch lists in 2018 and has lived up to lofty expectations. His aggressive style and punching power make him a fighter who boxing fans want to see. 2020 will be a big year for both fighters. This series was built on giving young, talented fighters national television exposure and we are excited to get a first look at Ja’Rico O’Quinn, a U.S. amateur standout who is an all-action fighter with high expectations.”

“On January 17, boxing fans are going to see some of the best prospects in boxing from big to small,” said promoter Dmitriy Salita. “The card features young, hungry fighters in the super flyweight, junior middleweight and super middleweight divisions. Vladimir Shishkin, Shohjahon Ergashev and Ja’Rico O’Quinn are all undefeated, world-rated fighters on their way to national recognition and world titles. First, they have to pass the biggest tests of their careers.”

The 28-year-old Shishkin shined in his United States and ShoBox: The New Generation debut in August, registering an eighth-round technical knockout against then once-beaten DeAndre Ware. Standing at 6-foot-1, Shishkin was a standout amateur in Russia where he compiled 301 wins in 330 fights before turning professional in 2016. He has won his last four contests – all scheduled 10 or 12 round fights – via knockout, including a 10th round TKO of former world title challenger Nadjib Mohammedi prior to his American debut in October 2018. Currently training in Detroit under Javan “Sugar” Hill, Steward at the new Kronk Gym, Shishkin is looking to continue his ascent up the rankings in the super middleweight division with a second consecutive statement win on ShoBox.

“Training with Sugar Hill at Kronk Gym is going really well, and I can guarantee that I will be ready and I will put my newly learned skills to use,” Shishkin said. “I hope for another emphatic victory that impresses the American boxing fans. I’m looking forward to putting on a great fight and letting the champions at 168 know that this is my year.”

The 30-year-old Sierra, from San Diego, Calif., is riding an eight-bout winning streak including a unanimous 10-round decision over Fidel Hernandez for the vacant WBC Silver Super Middleweight Championship in April. The son of former San Diego Padres pitcher Ulises “Candy” Sierra, he has sparred with future Hall of Famers Andre Ward and Canelo Alvarez and former world champion Peter Quillin. Prior to Sierra’s career-best win in April, he won four straight contests in Mexico, including three by knockout.

“I’m happy for the opportunity to face a good opponent and I’ll use him as a steppingstone to get where I want to get,” said Sierra. “I still have a month of preparation to get into the best shape of my life. I know Shishkin is undefeated and has a Russian amateur pedigree. It’ll be the hardest fight of my career, but I will do anything and everything to come out victorious.”

Hard-hitting super lightweight Shohjahon Ergashev (17-0, 15 KOs), of Uzbekistan, is ranked in the top-15 in three of the four major sanctioning bodies. The 28-year-old is coming off an impressive fourth-round knockout of veteran Abdiel Ramirez this past August on ShoBox. In his previous appearances on the prospect developmental series, the former member of the Uzbek national team scored a third-round knockout against then top-10 rated Sonny Fredrickson, and a 10-round unanimous decision over previously unbeaten Mykal Fox. The powerful southpaw currently trains alongside stablemate Shishkin in Detroit.

“I am adding new dimensions to my game and plan on making a big statement in the first ShoBox of the year,” said Ergashev. “2020 is going to be my year and I am going to set the tone in my fight with Estrella.”

Estrella, who hails from Monterrey, Mexico, turned professional in 2010 and won 22 consecutive fights before he suffered his first setback in 2015. With just seven of his 33 pro fights going the full distance, Estrella is an all-action fighter typical of his Mexican roots. He earned a career-best win, a closely-contested split decision over Oscar Duarte, in his U.S. debut in February. Estrella will face his fourth undefeated prospect in his last five fights as he looks to get his career back on track with a win over the highly-regarded Ergashev.

“This is an opportunity I’m going to take full advantage of,” said Estrella. “I’ve been in camp for the last two months, so I’ll be in perfect shape to go in there and do my thing. I know Ergashev is a southpaw and a hard puncher with a big KO record, but I’ve been in this situation before. I have too much experience for him. Knowing that if I win this fight I could get a world title shot is all the motivation I need.”

The 24-year-old O’Quinn is rated No. 10 in the world by the WBO. Ranked as the No.1 amateur bantamweight in the country compiling a record of 130-18 before turning professional in 2015, O’Quinn boasts blazing-fast hands and an ability to throw effortless combinations. A fan favorite in his hometown of Detroit, he was last seen winning a unanimous decision over James Smith of Flint, Mich., in October.

“The time has finally come,” said O’Quinn. “It’s my time to show the world who the king is on live TV. For those that don’t know, January 17, I’m going to show the world greatness in is purest form. They are going to see charisma, skills and explosiveness. I know I’m fighting a tough competitor. He’s not coming to lay down. I’m coming prepared for war. It’s going to be a great night for boxing in the super flyweight division. I’m putting all the champions on notice.”

Vasquez, from Reno, Nev., is a former streaking prospect in the super flyweight division. After losing his third professional fight, the 5-foot Vasquez rattled off thirteen consecutive wins between 2012 and 2017 and was well on his way to making a name for himself in the division before a unanimous decision loss to once-beaten Ricardo Sandoval in May 2018 halted his momentum. After a year-and-a-half layoff, Vasquez returned by fighting Gilberto Mendoza to a majority draw in October. At 32 years old, the hungry Vasquez finds himself in a do-or-die fight against O’Quinn.

“Training in Reno is going amazing,” said Vasquez. “It’s such a tremendous opportunity for my life. I’m trying to get to a high ranking and it’s a dream come true. I know O’Quinn is undefeated. He’s a boxer who likes to grab a lot. He doesn’t like pressure. I’m hoping I will tire him out. I think he’ll eventually give in as the fight goes on if I put on a lot of pressure. In the later rounds, he won’t even want to come out of his corner.”