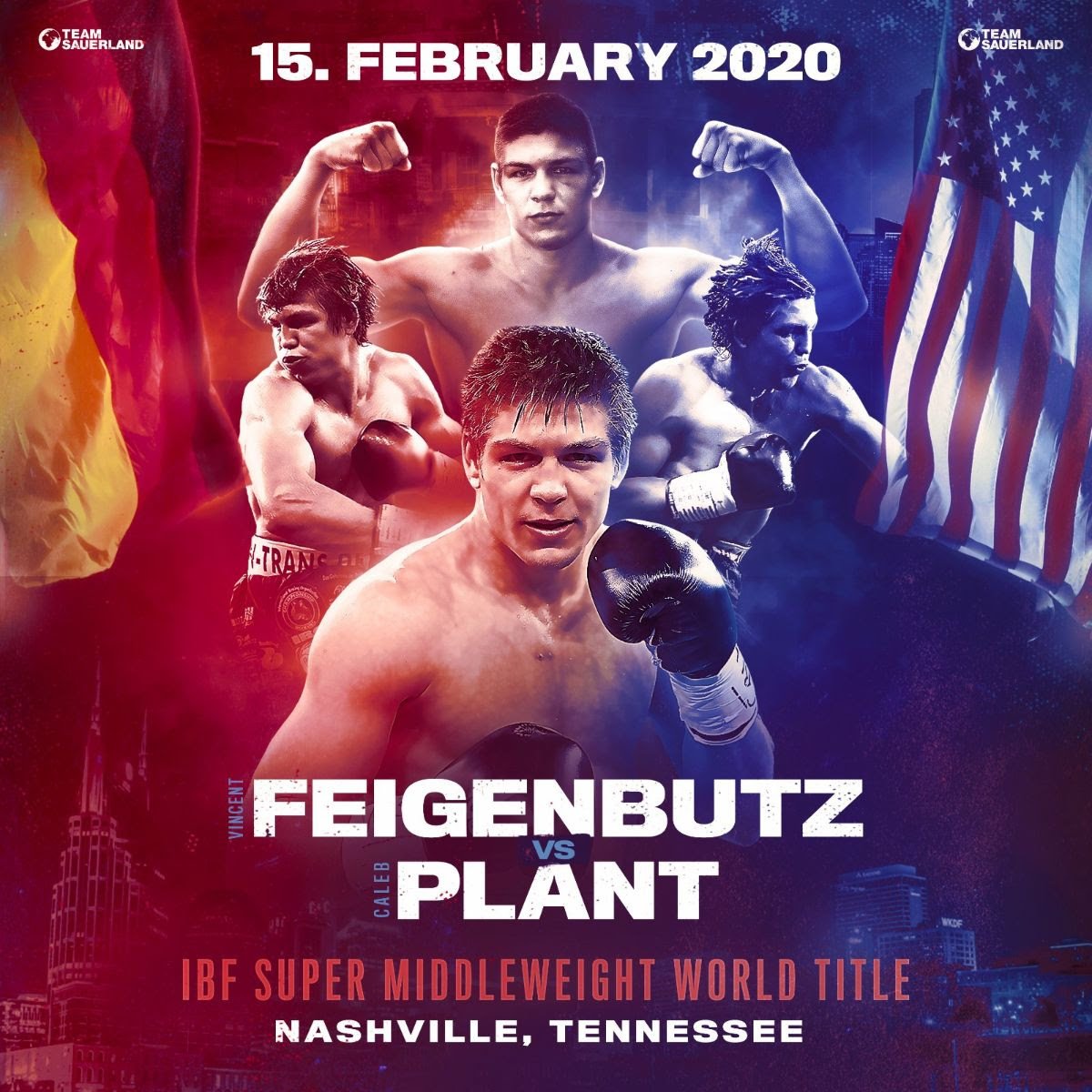 The heavy-handed German boasts an 85% KO record and is the former WBA regular World Super Middleweight Champion having picked up the title with a third round stoppage over Mauricio Reynoso in 2015.

Feigenbutz, who looks to follow in the footsteps of the legendary Max Schmeling by becoming the second German boxer to be crowned a World Champion in the United States, is confident he can continue his five-fight knockout streak.

“It has always been my goal to box in the United States and conquer the country,” says Feigenbutz. “I’m not going over there to lose. My aim is to become the second German boxer after Max Schmeling to become a World Champion in the USA.

“My dream is to restore German honour and bring back the belt that Sven Ottke and Graciano Rocchigiani once wore. I hope all of Germany will stand behind me!

“I think Plant is the strongest of all the super middleweight World Champions. I’m an underdog but I’m going to be Caleb’s most dangerous opponent. I know how difficult it is to win a World title on American soil so I have only one objective – Knock him out!”

Caleb Plant picked up the IBF Super Middleweight World title in January 2019 when he ripped the belt from the highly regarded Jose Uzcategui, dropping the Venezuelan twice on route to a unanimous decision points victory.

The Nashville native more recently defended his title on the Pacquaio vs Thurman undercard in Las Vegas in July. Plant made light work of the previously unbeaten Mike Lee as he dropped him four times before winning by TKO in round three.

“I’m very excited to bring my World title home to Nashville in my second title defence,” said Plant. “Vincent Feigenbutz is a very tough, rugged European fighter. He’s got a big knockout ratio, but this is my backyard and I will not let any man come in here and rain on my parade.”

Nisse Sauerland, who has promoted Feigenbutz since he was just 19 years old, is confident Vincent will seize the opportunity and put his name into the history books.

“It’s fantastic that finally a German boxer has the chance to make history and bring the IBF World title to Germany,” said Sauerland. “We are very happy that we can give Vincent this opportunity and he absolutely deserves this fight!

“Vincent has worked hard on himself over the last few years and despite being just 24-years-old, he has an impressive resume and plenty of experience. This fight is his big chance!”

The World title fight takes place at the 20,000-seater Bridgestone Arena and all the action will be broadcast live on Fox in the US and other territories to be released shortly.

Lightweight contender and Nashville native Austin Dulay will fight in front of his hometown crowd when he takes on former title challenger Diego Magdaleno in a 10-round fight that opens FOX PBC Fight Night action and on FOX Deportes Saturday, February 15 from Bridgestone Arena in Nashville, Tennessee.

Nashville’s Dulay (13-1, 10 KOs) has won back-to-back fights by stoppage since his lone pro defeat to top contender Chris Colbert in April 2018. The 24-year-old has fought professionally since 2015 and won his first 11 fights. He most recently scored a TKO victory over Yardley Armenta Cruz in February of last year, and his last time in the ring saw him stop Justin Pauldo in a fight that was later changed to a no contest. He will return to fight in Nashville for the first time since a 2017 victory.

The 33-year-old Magdaleno (31-3, 13 KOs) has twice challenged for a world title and will look for a signature victory on February 15 to get closer to another chance at the belt. The Las Vegas native previously dropped title fights against Roman Martinez and Terry Flanagan. Magdaleno won three straight fights between 2016 and 2018, including a triumph over Art Hovhannisyan, and most recently lost to lightweight champion Teofimo Lopez in February 2019.