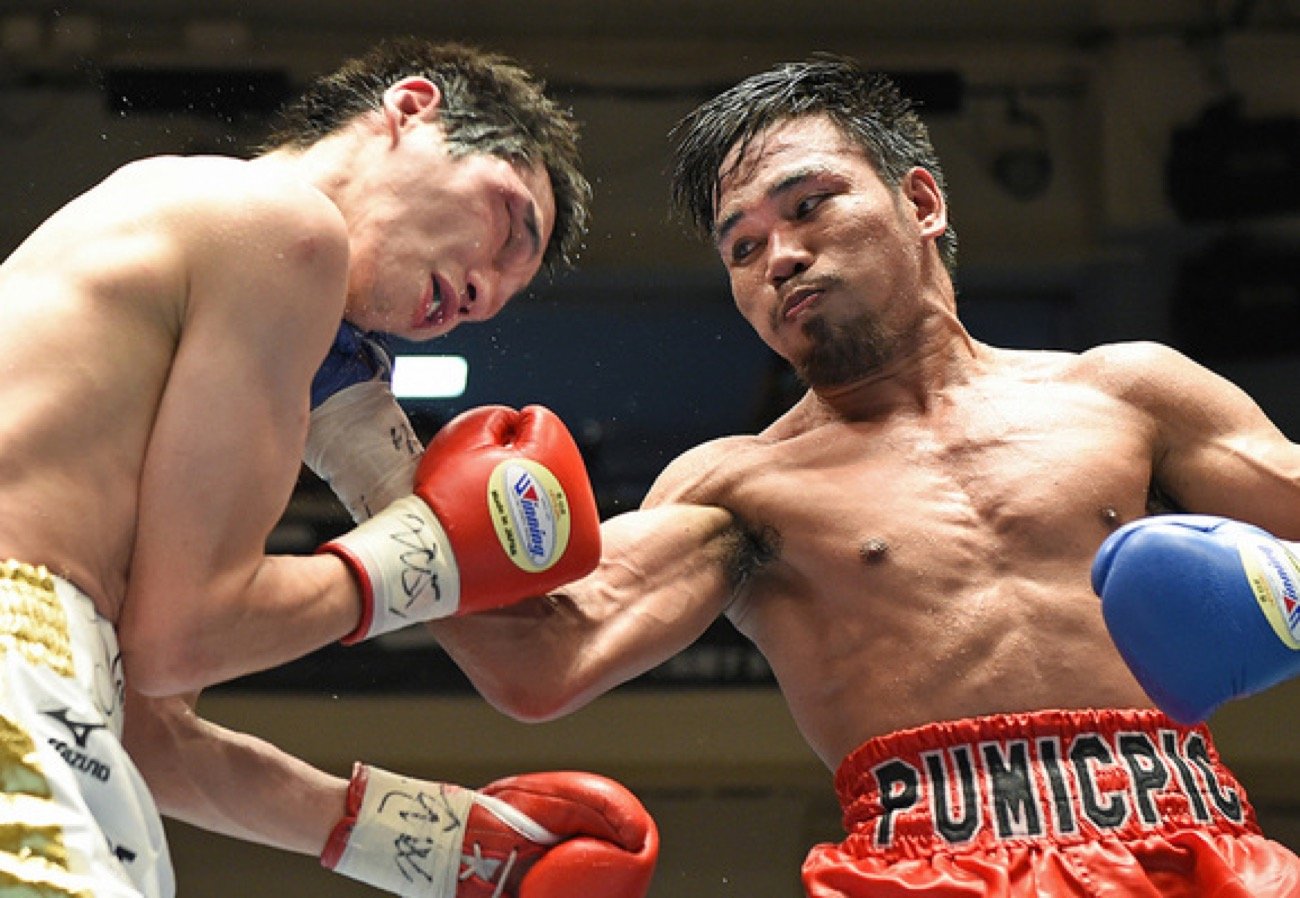 One of the Philippine’s most respected fighters Richard Pumicpic has the form and power to destroy the coming out party for red hot Vietnam technician Nguyen Van Gioi in Manila on May 9th. In what is sure to be a rough and tough welcome to the pro ranks, Gioi is tasked with besting the iron willed and fisted Manila boxer. The man nicknamed “The Beast” has 21 professional wins to his name, and should have many more on his resume against top opposition. It is no secret that the solidly built pinoy has been the victim some absolutely terrible decisions whilst on the road and away from his home country. In spite of that, this destructive come forward weapon of mass destruction is ranked #3 in the Philippines, and #40 in the world. He also boasts a win against Philippines top ranked super feather, “The Jaw Breaker” Joe Noynay and top ten in the world.

Vietnam’s Nguyen Van Gioi is clearly a special talent. Despite limited opportunities to compete in his home country, this deft southpaw shows superb balance and timing, and is regarded by many as one of Vietnams’s most skilled warriors. Gioi fought at Victory 8 Hanoi in October 2019, and put on a near flawless display against rising star Virgel Vitor, edging the Philippines visitor with impeccable defence and counters. This is truly a testament to the skills of Nguyen Van Gioi, that he can be matched against “The Beast” Richard Pumicpic at his professional debut, and as such, a win against a fighter ranked top 40 in the world would surely be one for the record books!

“YOU WANT THE BELT SUAREZ? COME TAKE IT FROM ME”

Indonesia’s number one fighter, and current WBC Asia champion Defry Palulu, has thrown down the gauntlet to Charly Suarez ahead of their Manila bout on May 9th. The champion was highly respectful of his opponent, but didn’t mince his words. “You want my Asian belt Suarez? No problem, just come and take it. Oh, but one big problem for you to deal with mister, you have to beat me first!”

Defry Palulu will defend his WBC Asian crown against the Philippines most touted up and comer Charly Suarez in Manila next month. Palulu is the winner of an amazing 22 of his 24 fights, and considers himself a lot smarter boxer now than when he first started out. “I have learnt a lot in my career, and have been the best fighter in Indonesia for many years now. That didn’t happen by accident! I have worked very hard to reach this level, and I plan to teach Charly Suarez that he should have stayed in the amateur boxing. It’s a lot safer for him!”

The Philippines’ Charly Suarez has a long history as an amateur star, often headlining national teams at international events. He was a national and regional champion, most recently winning gold at the 2019 SEA Games. At the age of 31, he has finally decided to launch an assault on the world rankings as a pro, and is looking to fast track that long road with an ostentatious bid to dethrone Defry Palulu. The talented Charly Saurez currently sits at 4 and 0 as a pro, all by way of knockout, and is excited by his upcoming date with the rugged Palulu.

“BUT WHO IS THIS NGUYEN VAN HAI”

The criteria to qualify for the esteemed regional title is that the fighters must have a minimum of two stars on BoxRec.

A hero in his home country, Hai was submitted as a case for exception, based on his vast and impressive amateur resume, and the fact that most Vietnamese till recently, had no opportunity to compete as professionals.

Francis Chua has been endorsed by the WBC as the best candidate for the title (which must be contested by at least one fighter coming from the Australia, NZ and Pacific region) Chua is a real powerhouse in the ring, and one of the most popular boxers in the west of Australia. The Perth based fighter is renowned for his relentless attack, and has designs on moving up in the world rankings. When told that he is on a short list for the Australasia title, Chua declared his willingness to test himself against the very best. His career highlight to date was his win over top class Kye MacKenzie, and upset which cost the favourite a subsequent clash with world champion Vasyl Lomachenko.

Negotiations to get Chua are still progressing. When informed that Victory 8 had already put Nguyen Van Hai in one corner, Chua responded “I don’t want to offend anybody here, but I am in this sport to fight the absolute best. I actually didn’t even know they did boxing in Vietnam! This is really the first time I have heard about it. I want to fight champions, but seriously, who is this Nguyen Van Hai?”

If Victory 8 get their way, Francis Chua will get a lesson on Vietnam boxing and the legendary Hanoi son Nguyen Van Hai very soon!