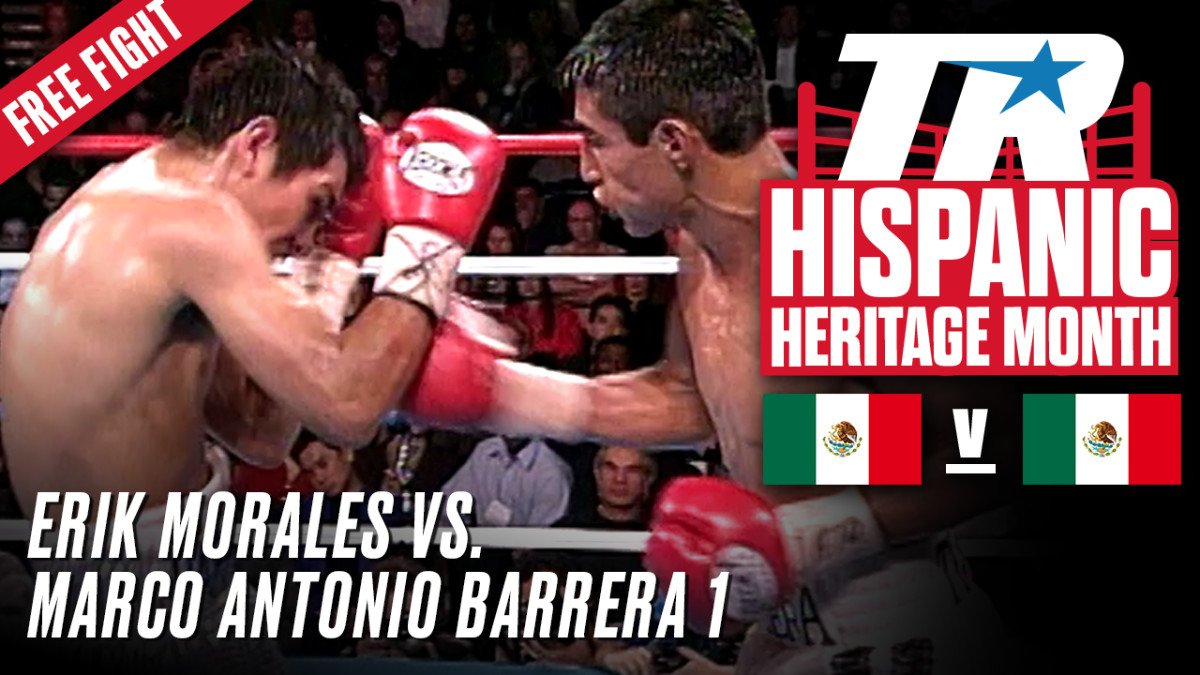 Top Rank will open up the vault in honor of National Hispanic Heritage Month (September 15-October 15). Five of the greatest fights in company history featuring Hispanic fighters will be available for free on Top Rank’s YouTube channel.

The series will kick off TODAY, Oct. 2 with the first fight between Mexican legends Marco Antonio Barrera and Erik Morales. The animosity between Tijuana native Morales and Mexico City product Barrera was palpable, as the two went toe-to-toe for 12 breathtaking rounds in what was named Fight of the Year by Ring Magazine in 2000. Morales prevailed by split decision, but the two Hall of Famers renewed acquaintances twice more over the next four years, with Barrera winning a pair of tight decisions. In the end, very little separated two of Mexico’s all-time greats.

The series will continue with the following bouts.

Fight Date: Dec. 8, 2012
Why It Mattered: Pacquiao and Marquez fought a trio of razor-thin bouts over the previous eight-plus years, with Pacquiao holding a 2-0-1 advantage. In their fourth bout, Pacquiao knocked Marquez down in the fifth round and was on the verge of scoring a knockout until lightning struck in the form of a Marquez right hand. Ring Magazine named this instant classic 2012 Fight of the Year, and Marquez’s one-hitter quitter was the publication’s Knockout of the Year.

Puerto Rico vs. USA
Fight Date: June 9, 2007
Why It Mattered: A sold-out crowd of 20,658 at Madison Square Garden packed the house to watch WBA welterweight world champion Cotto on the eve of the annual Puerto Rican Day Parade. Cotto was 29-0 at the time, and he broke down Brooklyn native Judah, notching an 11th-round TKO in what was a Fight of the Year contender.

Mexico vs. Mexico
Fight Date: Sept. 14, 2002
Why It Mattered: The fight was billed as “Bad Blood,” and the long-standing feud set the stage for a memorable super welterweight title unification battle that took place on Mexican Independence Day Weekend. In a back-and-forth rumble, De La Hoya dug deep with a furious assault in the 11th round that forced referee Joe Cortez to stop the fight. The fight drew more than 900,000 buys on pay-per-view, further solidifying De La Hoya as one of the most bankable stars in boxing history.

Panama vs. USA
Fight Date: June 16, 1983
Why It Mattered: More than 20,000 fans were on hand at Madison Square Garden to watch living legend Duran take on reigning WBA super welterweight champion Moore, the undefeated Bronx native who was a 5-2 favorite. Duran turned 32 years old on fight day and had lost twice since the infamous “No Mas” fight against Sugar Ray Leonard almost three years prior. Duran battered Moore en route to an eighth-round stoppage, winning a world title in a third weight class and cementing his legacy as an all-time great