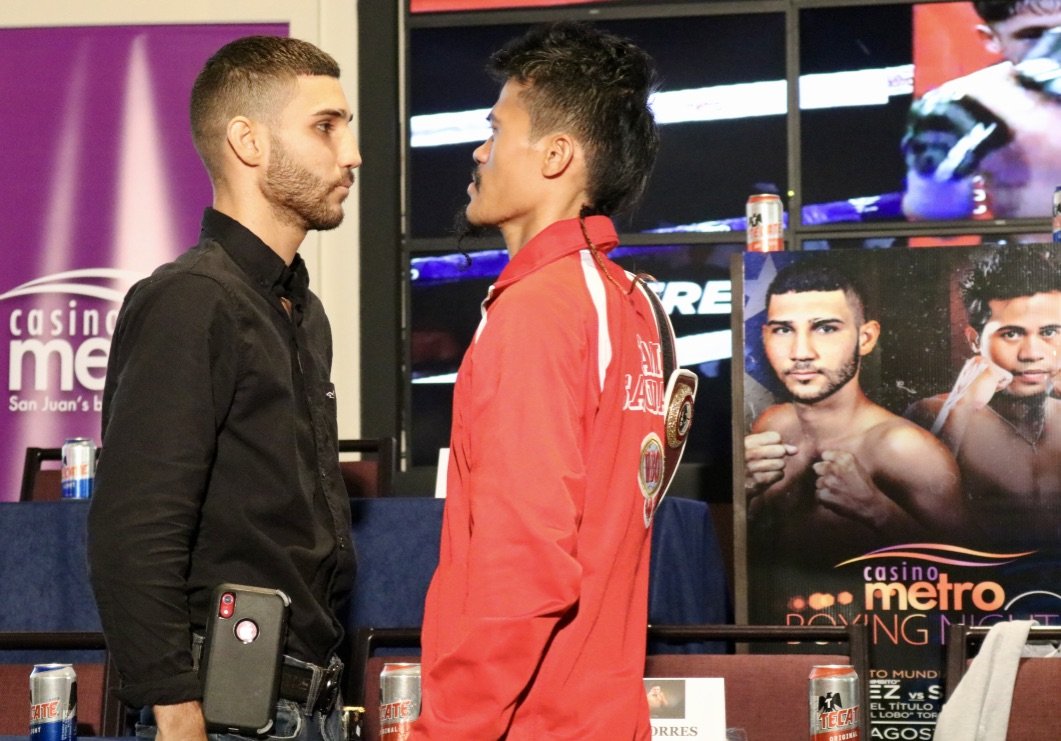 The time is coming for world title boxing to return to Puerto Rico. This Saturday, August 24, the Island will have such a fight when the WBO minimum weight champion, Filipino Vic Saludar, defends his belt against Puerto Rican Wilfredo “Bimbito” Méndez in another edition of the “Casino Metro Boxing Nights “, presented by PR Best Boxing Promotions (PRBBP) in association with Spartan Boxing, Puerto Rico Convention Center in San Juan that will be broadcast live on Wapa Deportes.

“In PR Best Boxing we continue making history. We return with world boxing on the Island and we will present the first boxing event to be held in the Ballroom of the Puerto Rico Convention Center. We will have Bimbito Méndez looking to be crowned before his people in front of a good rival as is Saludar,” said promoter Iván Rivera, president of PRBBP. “We will have seven fights in total, in which we will present the world ranked Jean Carlos” Lobo “Torres and other Puerto Rican prospects. It will be a good boxing night in Puerto Rico.”

Bimbito Méndez (13-1, 5 kos), 22, comes from a win over his compatriot Janiel “Pototo” Rivera by unanimous decision on May 24 to defend his WBO NABO belt for the first time getting on the road to face Saludar.

“Today I got up and said: ‘Am I dreaming?’. No, this is not a dream, the successful persons don’t dream, fight for their dreams and that is what I have been doing since I started in professional boxing, working hard. I know that Saludar is a strong opponent and thanks him for coming to my house. He came here and that is to be respected. In this life, nothing is impossible. This Saturday there will be a new world champion of 105 pounds and I will end the drought of male champions in Puerto Rico. I trust my nine-week camp. I want my people come this Saturday to see the new world champion,”said Méndez, who trains at the Caimito Gym in San Juan under the orders of Freddy Trinidad and Yowi González.

“(I am) happy to be in Puerto Rico and face Bimbito. We are ready to fight. It will be a good fight this Saturday. We come to do a good job in Puerto Rico. We have been training for this fight for a long time, with good sparring and we hope take us the victory,” said Saludar.

“Miguel, thanks for accepting the fight, I hope you come well prepared. I am prepared for this fight. I want to send a message to the (fighters of the division of) 140 pounds in the world: Jean Carlos “Lobo” Torres is ready to face anyone at 140 pounds and we will show it in every fight coming,” said Torres.

Zamudio, meanwhile, indicated that “(It’s) My first time in Puerto Rico. Jean Carlos is a good level fighter. I come prepared, ready. Jean Carlos, that night you can lose your undefeated record.”

While Spartan Boxing president Raúl Pastrana was excited to have his first fighter (Bimbito Méndez) fighting for a world title this Saturday.

“It’s a dream come true. My first fighter, who debuted three years ago and today is receiving his first title opportunity. We look forward to everyone’s support,” said Pastrana.

SAN JUAN, PUERTO RICO- WBO minimumweight champion, Filipino Vic Saludar, arrived in Puerto Rico this morning to complete his training for his defense against the #1 ranked, Puerto Rican Wilfredo “Bimbito” Méndez, this Saturday at the Ballroom of the Puerto Rico Convention Center in San Juan in a presentation of PR Best Boxing Promotions in association with Spartan Boxing that will be broadcast live on Wapa Deportes.

“We come to make a good fight. We are well prepared after a long training camp to maintain the title,” said Salute through an interpreter.