Vergil Ortiz Jr. (16-0, 16 KOs) and Maurice “Mighty Mo” Hooker (27-1-3, 19 KOs) hosted a final press conference today ahead of their 12-round fight for the WBO International Welterweight Title. The action will take place this Saturday, March 20, at Dickies Arena in Fort Worth, Texas, and will be streamed live exclusively on DAZN worldwide, including the U.S. and Mexico.

Below is what today’s main event participants had to say at the press conference:

VERGIL ORTIZ JR, WELTERWEIGHT CONTENDER:
“I’m very thankful to be fighting back at home again, especially after fighting in a bubble last year. It was a really cool experience. I found that I really love the fans. I enjoy the fans. So, what better place to come back and fight than in the Dallas Fort Worth area?”

“This fight is really special to me. I asked for this fight at 140 pounds. He was a good fighter then, and he is a good fighter now. I want to fight for the best. The only way to be the best is to fight the best. I feel very confident. I have the confidence of my promoter and team behind me. I had a great camp, and I am ready to go.”

“We will find out on Saturday if my power and size will be too much for him. I have never been in the ring with him before, so I don’t know how he will take it. But it’s not just power with me. It’s not just my physical attributes. My best attribute is my thinking ability, and I’m going to do a lot of that on Saturday.”

“This is going to be one of the first fights in Dallas between two world-class natives of the area. We are going to put on a really great show. I’m really excited about it. We’ve trained really hard, and I hope you all enjoy the show.”

MAURICE HOOKER, FORMER WBO JUNIOR WELTERWEIGHT CHAMPION:
“This fight will mean everything to me. I’m happy to be back at home where fans at home can see me. And it’s great to give to the fans something special after all they have been going through.”

“I have been watching Vergil Ortiz for a while now. I have been supporting him since he started because he is from Dallas. His 16-0 with 16 knockouts don’t mean anything to me until we get in the ring. I mean, it’s cute, but we will see in the ring.”

“I’m excited. My team is excited. I’ve worked hard. The fact that I’ve been called the underdog has pushed me more. I’ve prepared well for this fight. I’m going to go in the ring, do my business, and have fun with it.”

OSCAR DE LA HOYA, CHAIRMAN AND CEO OF GOLDEN BOY:
“Everyone is saying that he is the next big thing in the welterweight division. And he is. But first, he has to get past Maurice Hooker, and that is no easy test. This is a real fight and a tough test for him. If he beats him, he will go straight to the top of the division, where there are many big fights to make. I can’t say who I want him to see next because this Saturday’s fight is a big test.”

“Hooker’s style, abilities, and experience make him dangerous. He’s going to show Vergil different angles. It’s a different style than what Vergil has faced in the past. But Vergil has a great corner. He is a great fighter and has a great team. They’ve studied Maurice. So that’s why I feel this will be an amazing fight.”

Ortiz Jr. vs. Hooker is a 12-round fight for the WBO International Welterweight Championship presented by Golden Boy. Hennessy sponsors the event “Never Stop. Never Settle” and “BetOnline – Your Online Sportsbook Experts.” On Saturday, March 20, the fight will take place at Dickies Arena in Fort Worth, Texas, and will be streamed live exclusively on DAZN worldwide, including the U.S. and Mexico.

Tickets for Ortiz Jr. vs. Hooker are on sale and are priced at $200, $100, $60, and $40, not including applicable service charges and taxes. Tickets will be available for purchase at www.dickiesarena.com or www.ticketmaster.com. 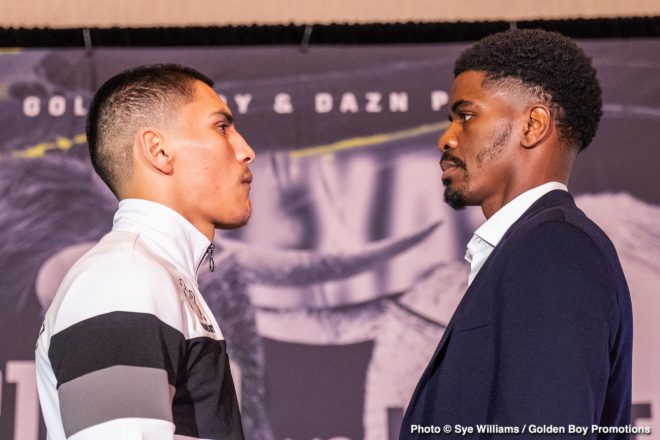 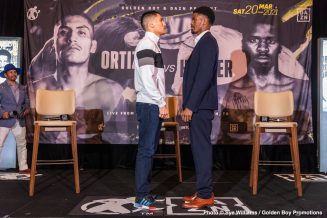 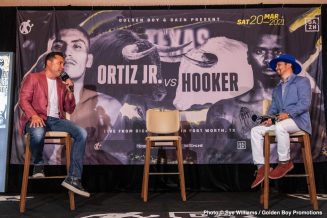 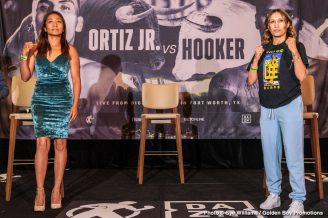 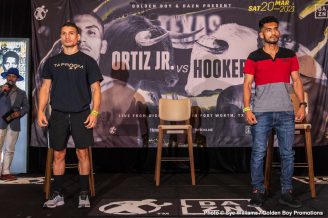 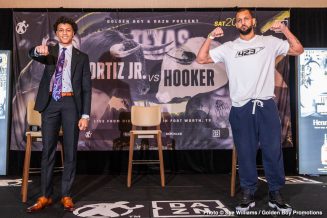