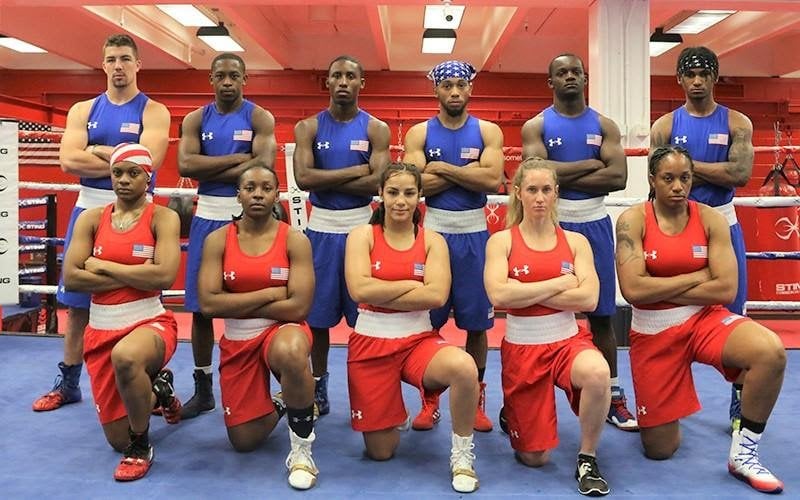 Team USA continued its winning ways with four more victories yesterday in the third and final day of quarterfinal bouts in Lima, Peru at the 2019 Pan American Games, clinching 10 medals for USA Boxing.

Lightweight Rashida Ellis (Lynn, Mass.) picked up the first win for Team USA by taking three of the five judges’ cards over Krisandy Rios of Venezuela to advance to the medal rounds in the first session of today, while teammate Keyshawn Davis (Norfolk, Va.) will have to wait another day to make his Pan American Games debut following a walkover win over Luis Arcon of Venezuela.

2017 World Championship silver medalists Duke Ragan (Cincinnati, Ohio) kicked off the second session of the day, facing hometown boxer Jorvi Farronan of Peru. Ragan kept his composure with a loud crowd cheering for his opponent to take all five judges’ cards to clinch his spot in tomorrow’s semifinals.

Ragan’s 2017 World Championship teammate and bronze medalists Troy Isley (Alexandria, Va.) closed out the day with a 3-2 victory over Jorge Vivas of Colombia. Isley’s win moved Team USA to 10 medals, their best performance since the 1983 Pan American Team that won 11 out of 12 medals.
Tomorrow’s semifinal sessions will be a busy day for Team USA, as all 10 boxers will compete in the two sessions, looking to improve their bronze medals to a silver or gold with winning performances.

All three members of Team USA put on dominating performances on the second day (yesterday) of boxing at the 2019 Pan-American Games in Lima, Peru, to extend USA Boxing’s record to 6-1.

Flyweight and team captain Virginia Fuchs (Houston, Texas) put on a boxing show for the crowd, taking a victory over Costa Rica’s Valeria Cardenas. Fuchs met Cardenas in the finals of the 2019 Pan American Games Qualifier and repeated her 5-0 win in today’s quarterfinals to move on to the medal rounds.

2018 Elite World Championships bronze medalist Naomi Graham’s (Colorado Springs, Colo.) power and jab were too much for Anna Salas, of Mexico, to handle, resulting in a referee stopped contest in the second round. Graham secures her third international medal of the year with this performance and advances to Tuesday’s semifinal round.

The final four members of Team USA will make their Pan American Games debut tomorrow. The four boxers, Keyshawn Davis (Norfolk, Va.), Rashida Ellis (Lynn, Mass.), Troy Isley (Alexandria, Va.) and Duke Ragan (Cincinnati, Ohio), all medaled at the qualifier in April and will be looking for a strong debut in Lima.

Team USA had a successful first day of boxing at the 2019 Pan American Games in Lima, Peru, winning three out of the teams four bouts.

Team captain and super heavyweight Richard Torrez Jr. (Tulare, Calif.) grabbed the first win of the day against the host countries Luis Munoz. Torrez put on a dominating display to take all five judges cards and advance to the semifinal bouts next week, as well as clinch Team USA’s first boxing medal.

Toledo, Ohio’s Oshae Jones closed out the first day of boxing with a 5-0 win over Atheyna Bylon of Panama. This marked the third time Jones has faced Bylon this year, taking the series following falling short in April’s Pan American Games Qualifier by split decision.

The fourth American to enter the ring today, Bruce Carrington (Brooklyn, N.Y.), left it all in the ring against Dominican Republics Orlando Martinez, but fell short of taking the judges cards and advancing to the semifinals.

The 11 boxers representing Team USA at this year’s Pan American Games in Lima, Peru departed from Colorado Springs, Colo. today following a two-week training camp at the United States Olympic and Paralympic Training Center. A full team roster can be seen below.

First held in 1937, and every four years since 1951, the Pan American Games are a summer sports competition for countries in North, South and Central America. In 2015 in Toronto, more than 6,000 athletes from 41 countries competed in 36 sports. 6,700 athletes are expected to compete in Peru, with Team USA sending a team of 643 total athletes.

Rashida Ellis, Troy Isley and Delante Johnson will be looking to repeat their gold-medal performances from the qualifier. Isley was the highlight of the qualifier, as he defeated reigning Pan American Games and Olympic Games champion Arlen Lopez of Cuba.

Keyshawn Davis and Oshae Jones are strong contenders and will be looking for redemption after earning Team USA’s silver medals at the qualifier. Rounding out the Pan American Games Qualifier medalists are 2018 elite world championships middleweight bronze medalist Naomi Graham and 2017 elite world championships bantamweight silver medalist Duke Ragan who both earned bronze to punch their ticket to Lima.

Boxing will begin July 27 at the Miguel Grau Coliseum and conclude on August 2. Click here to follow USA Boxing’s progress in Peru, as well as for news and boxer bios, and follow all of Team USA by clicking here: https://www.teamusa.org/lima2019