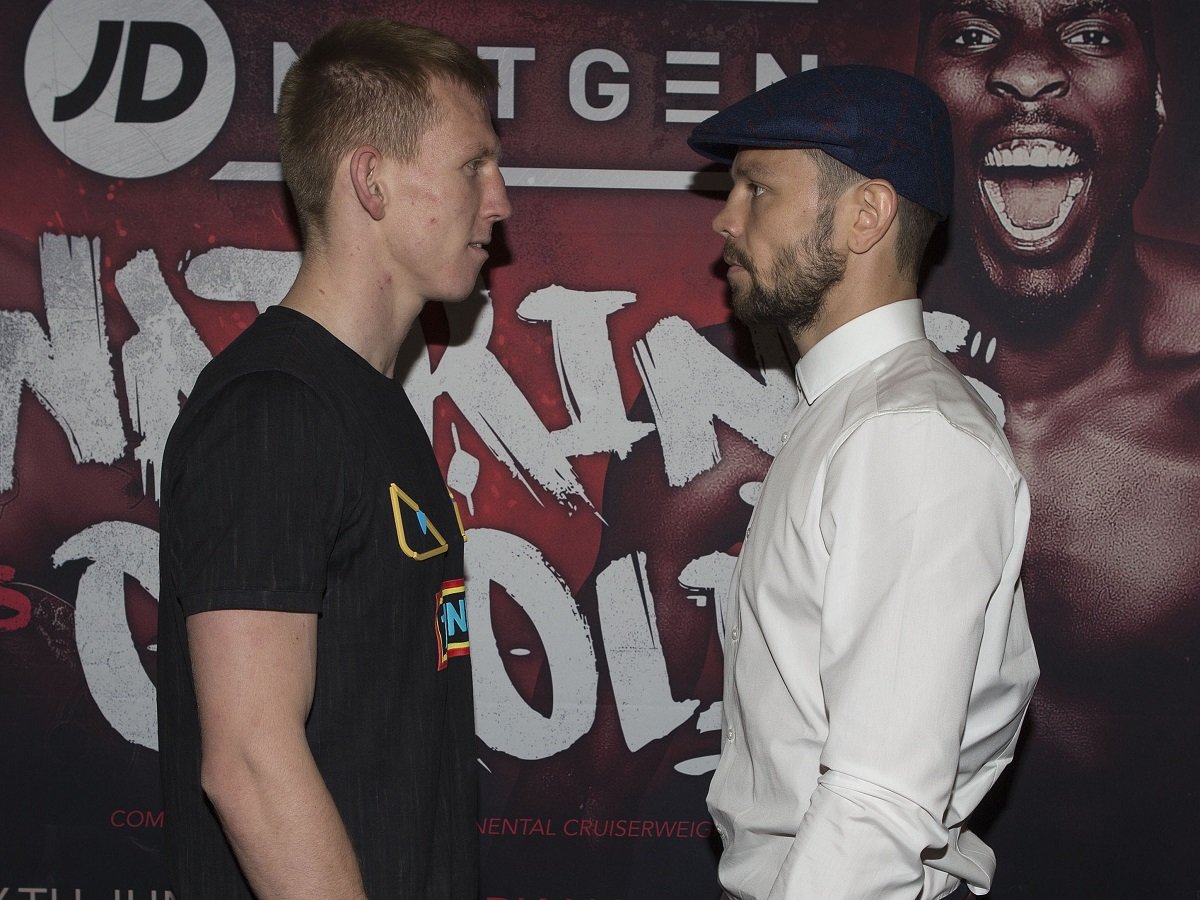 Pauly Upton hit back at Ted Cheeseman’s ‘fraud’ jibe as the unbeaten super-welterweights prepare to face off on Wednesday night – live on Sky Sports.

Upton (15-0-KO3) was accused by Cheeseman (13-0-KO8) of feeding off journeymen but the underdog remains confident of claiming the WBA ranking title at York Hall.

“I showed last time out that I can box and fight and change to the opponent in front of me.

“Come Wednesday night I’ll show everyone that I’m levels above Pauly Upton. He’s a fraud really and has boxed 15 journeymen. He’s got a real test on Wednesday.

“Pauly Upton is alright for a few rounds but he won’t be able to keep me off for 10 rounds. I personally thought he lost to Adam Jones.”

Upton was quick to retort: “You can only beat who they put in front of you.

“No matter what he thinks, I beat Adam Jones. The win’s on my record. I shouldn’t have fought at that weight – I was fat! Now I’m at my correct weight.

“This belt is a massive thing for me and I’ll be taking it. This is a big opportunity for me to provide a better life for my family and kids. It’s huge.”

Maxwell is looking for a third successive first-round KO in Manchester.
Super-lightweight knockout specialist Sam Maxwell admits it’s in the back of his mind to outdo Conor Benn when he takes on Kane Baker on the Tyson Fury undercard.

Benn recorded a second-round knockout of Baker last year but Maxwell – a Team GB amateur – is hunting a hat-trick of first round knockouts in Manchester on Saturday.

Maxwell said: “In the back of my mind, I’d like to better what Conor Benn did to him for bragging rights. Kane Baker is a tough guy though and that’s the only time he’s been stopped.

“I know I can’t go in there expecting a knockout because I might make mistakes. I’m a smart boxer. If I box the way I can and let my shots go, I’ll hurt him and look for a finish.

“Power is something I work on every day in the gym. I’m working on technique, setting my feet and lots of other things to keep increasing my power.

“I wouldn’t say I’m hopeful to be in the ring longer because I just want to get the job done but I’m prepared for a tough six rounds against Kane Baker if necessary.

“First-round knockouts are always a bonus though and I love the attention they bring.”

Stefy Bull is eyeing a future record-breaking title feat for Jason Cunningham, if he can beat Paul Economides on June 16 in his hometown of Doncaster.

Cunningham, 23-5 (6), has previously held Commonwealth Title honours at bantam and featherweight, but Bull says he would like his charge to also win the strap at super bantamweight, making him the first British fighter to hold the belt at three different weights.

Topping the bill at the Doncaster Dome, Wales-based Economides, 21-7 (5), will put his Central Area Super Bantamweight Title on the line against Cunningham, on a show jointly promoted by Dennis Hobson and Stefy, and broadcast live by Freesports (Freeview 95, Freesat 252, Sky 424, BT 95, Talk Talk 95).

The event was originally scheduled to be headlined by Curtis Woodhouse facing John Wayne Hibbert but, with that contest scuppered by a Hibbert injury, Bull is delighted at the replacement bill topper, believing it to be a great opportunity for Cunningham to progress his career at his natural weight – super bantam.

“This Doncaster Dome card is a great show, with some great prospects coming through. Obviously, the main event was Woodhouse but we’ve had to pull that because Hibbert has a back injury. So, Jason Cunningham has stepped up and will be moving down to more like his natural weight, super-bantamweight.

“Economides is in the top five at super-bantamweight, so it will be a great chance for Jason if he comes through. He can then really push onto the British, or try and get another Commonwealth title, which would mean he’d have won that title at three different weights, and I’m not sure if that’s been done before [confirmed by Simon Block from the Commonwealth Boxing Council].

“Jason really is a solid fighter and has been one of the best at the lower weights domestically for a few years now. He’s an ABA champion and two-weight Commonwealth champ. So, if he can beat Economides, and I believe he will, and it will be a cracking fight because they’ve both got all-action styles, then Jason can really progress.”

Sheffield-based promoter Hobson formed an alliance with free-to-air broadcaster Freesports last year; this upcoming show being his fourth on the channel. The partnership has already provided excellent viewing – including Liam Cameron stopping Sam Sheedy to win the Commonwealth Middleweight Title, and Josh Wale defending his British bantamweight title against Bobby Jenkinson – and Stefy is relishing contributing to the coverage.

“I’m really looking forward to this show, live on Freesports. It’s a great main event and a stacked undercard with some cracking prospects. Luke Crowcroft is back after three years, he was a top amateur, and I believe he could be a good challenger for Commonwealth Middleweight Champion, Liam Cameron, in the future. That’s what we’re aiming for if Luke can keep winning.

“The main event will definitely be a really entertaining fight, and this will be another good night of boxing on Freesports.”

Dennis Hobson Promotions, in association with Stefy Bull Promotions, presents Paul Economides defending his Central Area Super Bantamweight Title against Jason Cunningham at the Doncaster Dome on June 16. The show will be broadcast live on Freesports.