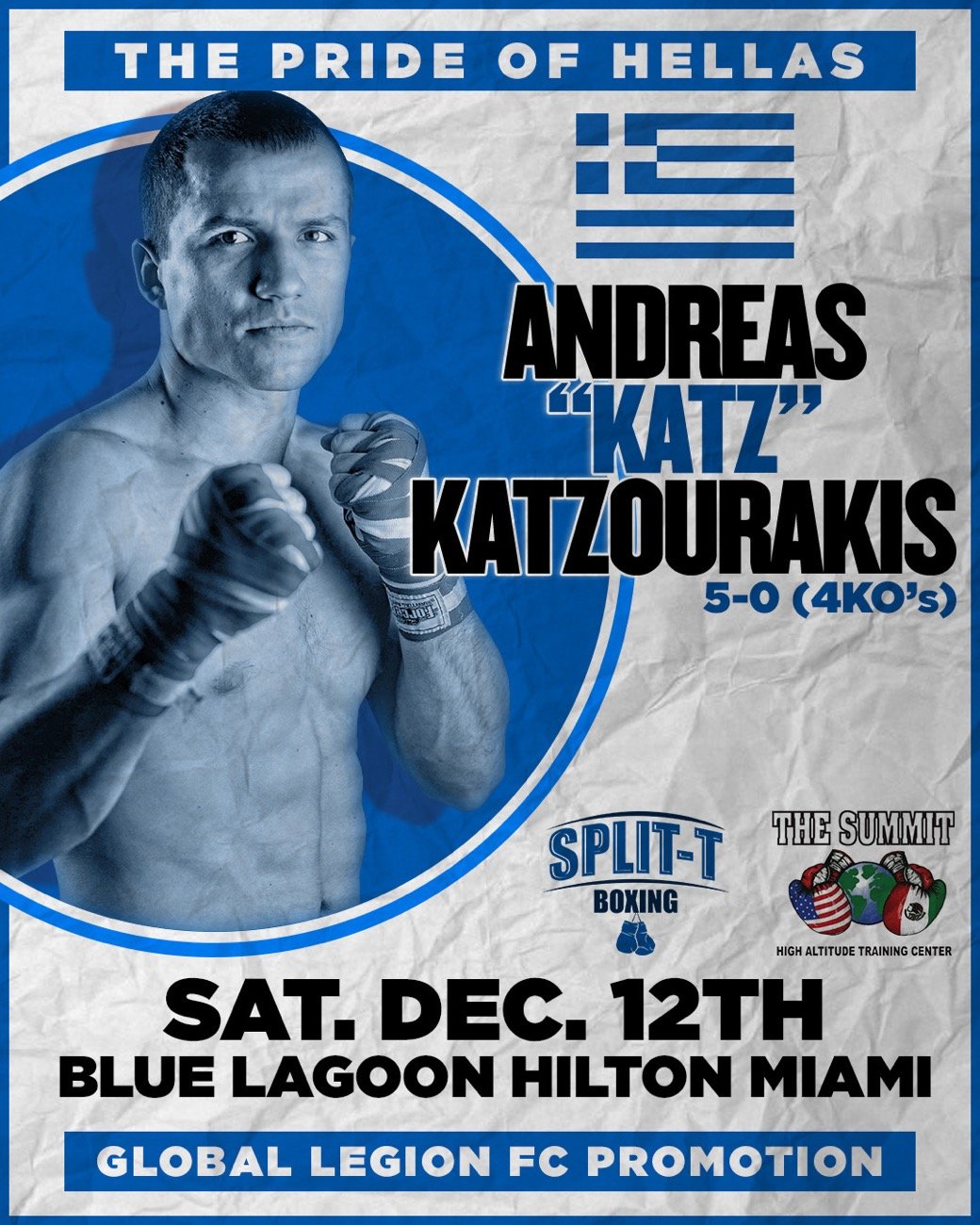 First Fight Under New Trainer Abel Sanchez – Highly-touted Greek boxer Andreas Katzourakis (5-0, 4 KOs) returns to the ring after nearly a year hiatus on Saturday, December 12th at the Blue Lagoon Hilton in Miami. Katzourakis is set to face 35-fight veteran Brandon Baue in a six round bout contested at a catchweight of 158 lbs. Two undefeated opponents had earlier pulled out of the fight, the last due to a COVID-19 related issue on Monday evening.

Katzourakis spent much of 2020 at home in Greece before signing with Split-T Boxing in September. By mid-October, he was stationed in Big Bear Lake, California training under legendary coach Abel Sanchez. “Katz” has found a new home at Sanchez’s famed Summit Gym, nearly 7,000 miles away – and 7,000 feet above – his family and friends in Athens.
“I’ve had an amazing camp with Abel and the team. Here it’s all about hard work, rest, hard work, and rest again! There are no distractions to get your mind off of training and with the types of grueling workouts we are doing we need the fresh air that the mountain provides!” said Katzourakis.

“Andreas spent the last two months in the mountains of Big Bear Lake, living and training at The Summit Gym. I’ve been lucky enough to train some really exceptional middleweights in my career. Let me just say this kid gets me excited. We’ve been training hard and are looking forward to displaying the work put in at The Summit,” said Sanchez.
Split-T’s CEO David McWater is very encouraged by the potential he sees in the 23-year old fighter.

“Brendan Segalas (of Split-T) brought to my attention a kid he thought had all the tools to be special, but just needed some structure and a good team around him to sharpen those tools. Although he’s managed to roll over some tough, veteran opposition early in his career, Andreas is still a raw talent. He dominated Walter Wright in his fourth bout and that really caught my eye. We felt that if we put him in camp with Abel in Big Bear and let him develop the sky’s the limit, so that’s exactly what we’ve done,” said McWater.

Despite having only five professional bouts, Katzourakis has already established himself as one of the top up-and-coming prospects in the middle weight divisions. Split-T has interest from multiple promoters in signing their young fighter to a long term deal and plans to accelerate those conversations going into 2021. Still, Katzourakis’ team thought it was important to keep him active going into the new year. Regardless of wherever and whomever he is facing, Katzourakis is grateful for the opportunity afforded to him each time he steps in the ring.

“My biggest motivation to become a World Champion is to represent Greece and the Greek boxing community. I fight knowing what my ancestors had done in the past and what I can do for Greek boxing in the future. I don’t need much more motivation than that alone.”

To purchase tickets to Andreas’ fight and the entire Global Legion Fight Club 17 card visit Eventbrite.com. Doors open at 3pm ET and boxing begins at 4pm ET. The event will be streamed live via FITE.com pay-per-view.