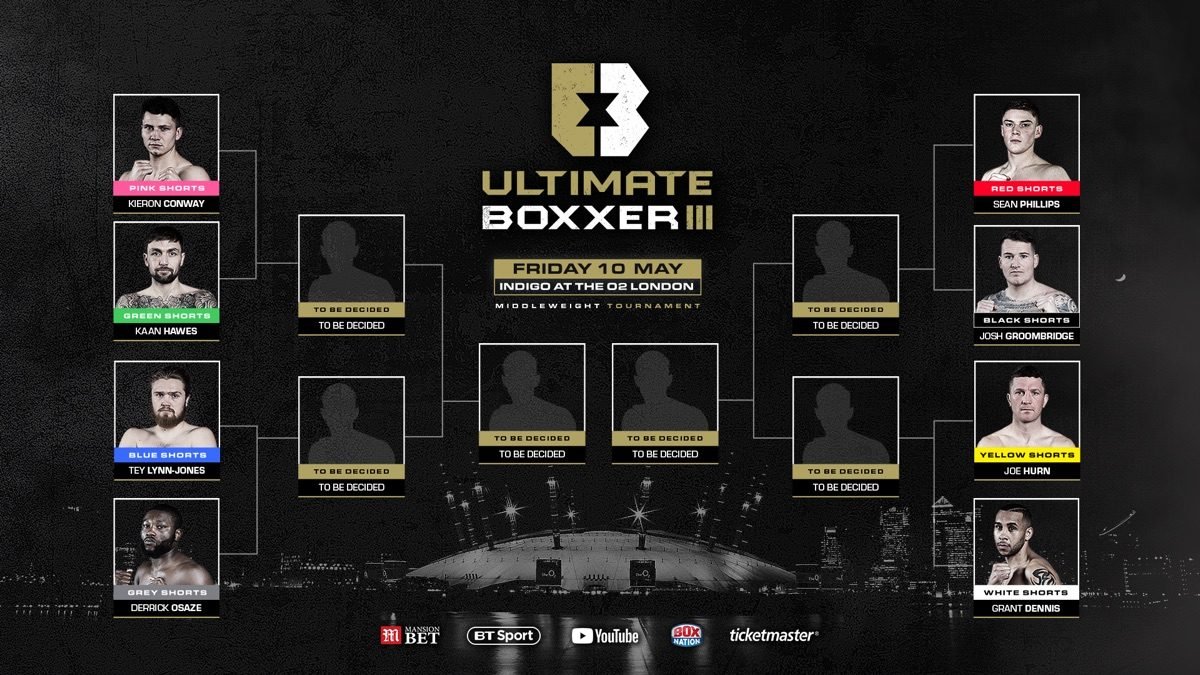 The official draw for the first round of fights in Ultimate Boxxer III: The Middleweights has been made for the exhilarating elimination tournament on Friday 10th May at The Indigo at The O2.

UB III, sponsored by MansionBet, is exclusively live on BT Sports, BT Sports’ You Tube channel – available to anyone to watch for free – and the dedicated boxing channel BoxNation.

In attendance at BT Sports’ studio, where the draw was held, was the Former WBO World Heavyweight Champion Shannon “Lets Go Champ” Briggs, who picked out the balls to make the following fights:

Odds supplied by MansionBet, the official bookmaker for UB III

A great match up to kick things off between a boxer and fighter and Hawes comes up against the tournament favourite. Witham’s Hawes, from the white-collar circuit, is unbeaten in five fights and loves to have a brawl. Northampton’s Conway is well schooled with a good amateur pedigree and is a former England international, currently unbeaten in ten as a pro.

A mouthwatering 50-50 fight and the best pick of the quarter-finals between two box-fighters with similar styles. Jones, from Grays, Essex, has the edge in experience having won and defended the Southern Area title and has more rounds under his belt, but the Puncher Preacher from Nottingham, by way of Peckham, is unbeaten and ready to cause an upset.

A hard-to-call showdown between a boxer and fighter that pitches Peacock Gym trained Philips, who’s an excellent technician and unbeaten in six, against the raw and powerful Groombridge from Uttoxeter who started on the white-collar scene and is very heavy handed.

An excellent match up between the big-hitting Hurn from Clacton against the skilled Dennis from Chatham. Dangerous Hurn has halted six out of 11, while Dennis has only lost once in 13, but has the experience being a former Southern Area champion and fell just short for the English belt.

ULTIMATE BOXXER founder Ben Shalom, said, “I’m stumped at picking a winner for any of the fights in the Quarter Finals, it’s that close. That’s what we want with Ultimate Boxxer, fights that are evenly balanced and when anything can happen in a split second that will add to the drama and suspense. In UB I and II combined we’ve had 27 knockdowns, that’s staggering across two shows and just shows that when fighters get in the ring for Ultimate Boxxer they go all out to win. I cannot wait to see who will eventually come out on top on May 10.”

Ultimate Boxxer III features Tey Lynn-Jones, Derrick Osaze, Kieron Conway, Grant Dennis, Sean Phillips, Josh Groombridge, Kaan Hawes and Joe Hurn as they battle it out to become Ultimate Boxxer on Friday 10th May at The Indigo at The O2.

An action packed undercard will see the return of the highly-rated and undefeated Light-Heavyweight talent and UB II winner Shakan Pitters and unbeaten super-middleweight prospect Idris Virgo who is out to prove to critics he is more than just a reality star.

Tickets are available from ticketmaster.co.uk AXS.com and ultimateboxxer.com priced at: