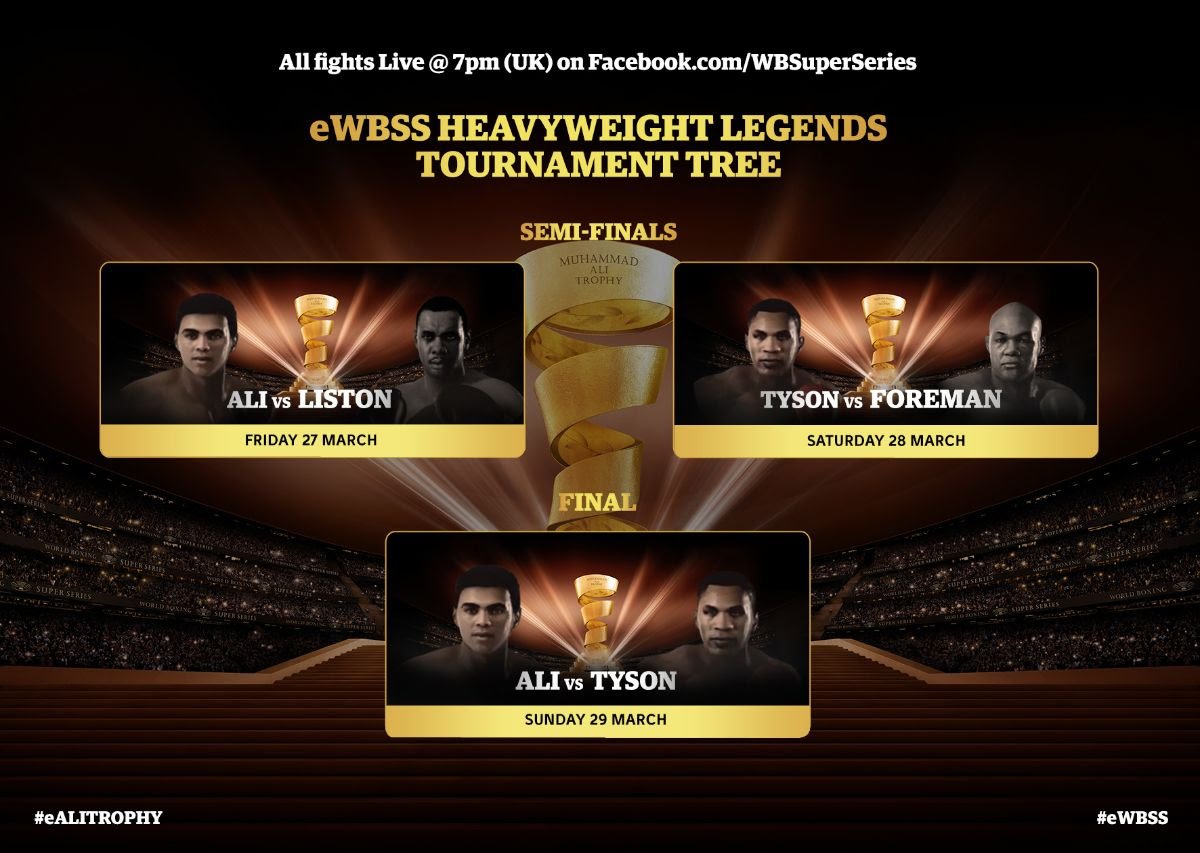 The eSport character of Mike Tyson took home the eAli Trophy after 12 rounds of war with eMuhammad Ali.

The three judges scored it 114-111 in favour of Tyson after a closely contested bout. The final was everything imaginable when you pair prime versions of Ali and Tyson. A titanic battle over 12 rounds. A highly skilled drama with the two of the most renowned boxers in sports history, The Greatest and The Baddest Man on the Planet. Iron Mike was floored in the opening round but got off the canvas to score two knockdowns of his own in claiming the decision.

Both Tyson and Foreman impressed in their quarter-finals.

Iron Mike got through with a brutal 2nd round stoppage of Butterbean, while Big George Foreman’s power proved too much in the end for David Haye as he sunk to the canvas in the fifth.

In their semi-final bout eTyson and eTyson fought a close back-and-forth opening round, but it soon came clear that Foreman was in for a tough night.

A huge right floored Foreman at the end of the third that saw him rise at the count at 6. Foreman came up, fought back – just as he did when Haye drooped him – but against Tyson he was up against a different kind of fighter – with absolute frightening power.

Soon Foreman found himself in trouble again as he was dropped twice in the fourth, the final one for the count. Tyson was 30-26 up on all scorecards at the time of the stoppage. He was simply the baddest of the two KO artists on the night.

Now there’s only fight left to determine who will win the eAli Trophy!

Both Ali and Tyson have been merciless and cutting through the opposition like a hot knife through butter en route to the blockbuster final – No 1 seed Ali needed a total of 10 rounds to take out Holyfield and Liston, No 2 seed Tyson did it in 6 against Butterbean and Foreman.
The inaugural ‘eWBSS Heavyweight Legends’ tournament began on Monday, March 23 and ends with the Ali-Tyson final on Sunday, March 29 at 7pm (GMT). The entire tournament is streamed on the World Boxing Super Series Facebook page.

Next week will see the start of Season 2 with a new weight class questing for the eAli Trophy in the classic WBSS eight-man format. Fans can vote between Middleweight and Welterweight and the poll closes Sunday on the WBSuperSeries Twitter at 2 pm.

Superior Muhammad Ali destroyed Sonny Liston over five rounds to book a place in the eWBSS final against either Mike Tyson or George Foreman for the eAliTrophy on Sunday.

Third time was not the charm for Sonny Liston as his eSport character lost to Muhammad Ali just as real-life Liston did twice back in the day to the Greatest of all Time.

eListon, who joined the ‘eWBSS Heavyweight Legends’ tournament as a late replacement for eJoe Frazier, got caught with a series of uppercuts in the first round from the Tournament No 1 seed. Liston managed to counter and score with his right, but at the end of the second round another Ali uppercut sent Liston crashing to the canvas.

A blistering combo from Ali sent Liston down again in the fourth, and in the fifth round it took a left uppercut from the GOAT with a minute to go to put Liston away for good. The ‘Big Bear’ had played its part, but was not able to beat the count.

Ali’s impressive victory sets up for a mouthwatering final as eMike Tyson is facing eGeorge Foreman 7pm (GMT) in Saturday’s big bout semi-final for a place in Sunday’s decider.

The tournament, simulated on EA Sports ‘Fight Night Champion’, is created to provide some much-needed relief and entertainment for fight fans around the world during these testing times.