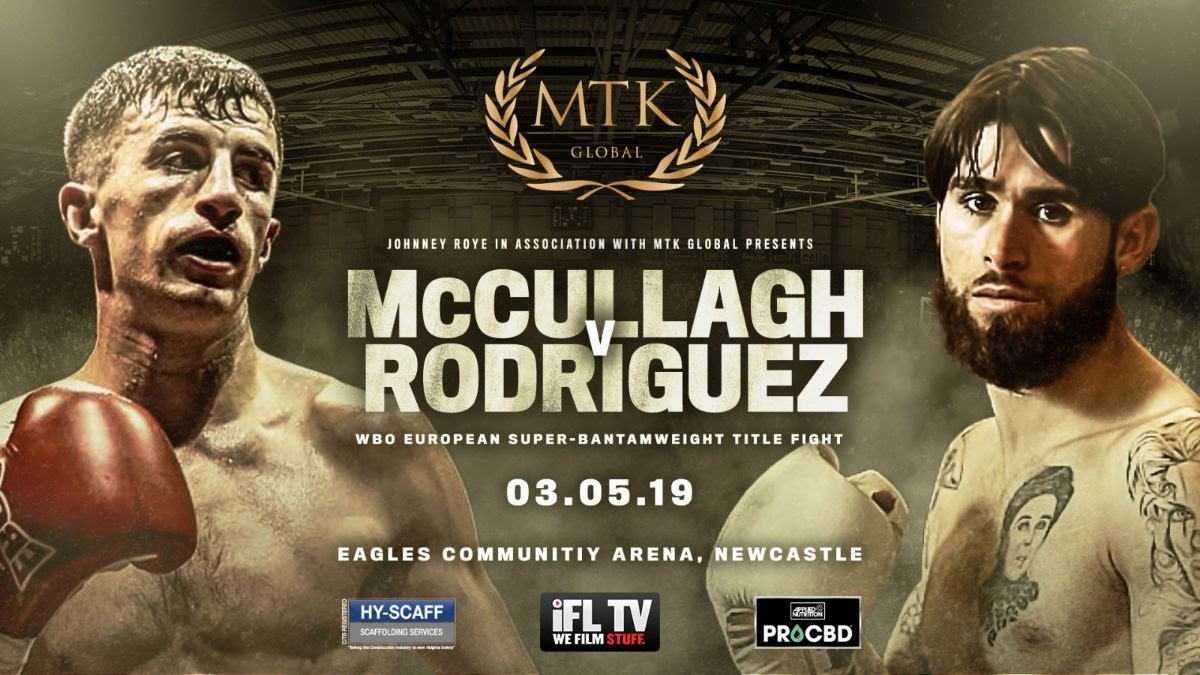 Tyrone McCullagh will make the maiden defence of his WBO European super-bantamweight crown against Alvaro Rodriguez in Newcastle on May 3.

The unbeaten ‘White Chocolate’ (12-0-KO6) takes on the Spaniard (9-2-1-KO1) on the #MTKFightNight at the Newcastle Eagles Community Arena – live on iFL TV – and is eager to take the next step towards a world title shot.

McCullagh said: “Rodriguez is a very good opponent. He’s a talented counter-puncher so hopefully he brings out the best in me but I’ve no doubt I’m going to retain my title on the night.

“I love the attention that being the main event brings. It gives you that extra bit of buzz. It’s all part of boxing and there are nerves but headlining shows is where you want to be.

“I boxed way down the bill on Ryan Burnett and Carl Frampton cards and fighting in an empty stadium was surreal. Then I boxed Joe Ham quite high up on a show at The SSE Arena and then headlined against Josh Kelly to win this title.

“Ultimately, I want to get that world title shot and I’d have to vacate this belt to do it but it’s already got me to 13th with the WBO and if I defend it a few times then I could be in the top 10.

“There are big shows this summer that a world title shot could come on. I know Emanuel Navarrete and Isaac Dogboe are both with Top Rank so whoever wins that, it could work out.”

Further fights and fighters will be announced in due course.

MTK Global is delighted to confirm leading prospect Viktor Kotochigov has become the first fighter to sign for MTK Kazakhstan.

The hard-hitting Kazakh, who has already blasted his way to 8-0-KO4 and seems destined for the top of sport, is delighted to have joined the world’s foremost boxing management company.

Kotochigov said: “I’m very happy to have this opportunity to work with MTK Kazakhstan and I’m proud to be the first fighter to join this campaign.

“Previously, I had no management and there were problems with the organisation of my fights but now, thanks to MTK Kazakhstan, I will be active and rise quickly towards the main goal: fighting for titles.”

Head of MTK Kazakhstan Ahmed A. Seddiqi said: “Viktor Kotochigov is a name that will be remembered for a long time; being the first fighter signed under MTK Kazakhstan.

“We’ve no doubt Viktor will shine in his division very soon and that many other super talents will follow him in joining us. Within one year, Kazakhstan will be the capital of boxing in Asia.”

Seddiqi’s business partner Askar Salikbayev added: “We’re happy to sign Viktor and we’re already in the process of signing other fighters we hope will join over the coming weeks.

“We’ve been lacking management in Kazakhstan but now with MTK Kazakhstan, our fighters will rise in the rankings at a very fast pace. The world can now bear witness to some superb talent.”

Kotochigov will make his UK debut on the #MTKFightNight at York Hall on April 26.