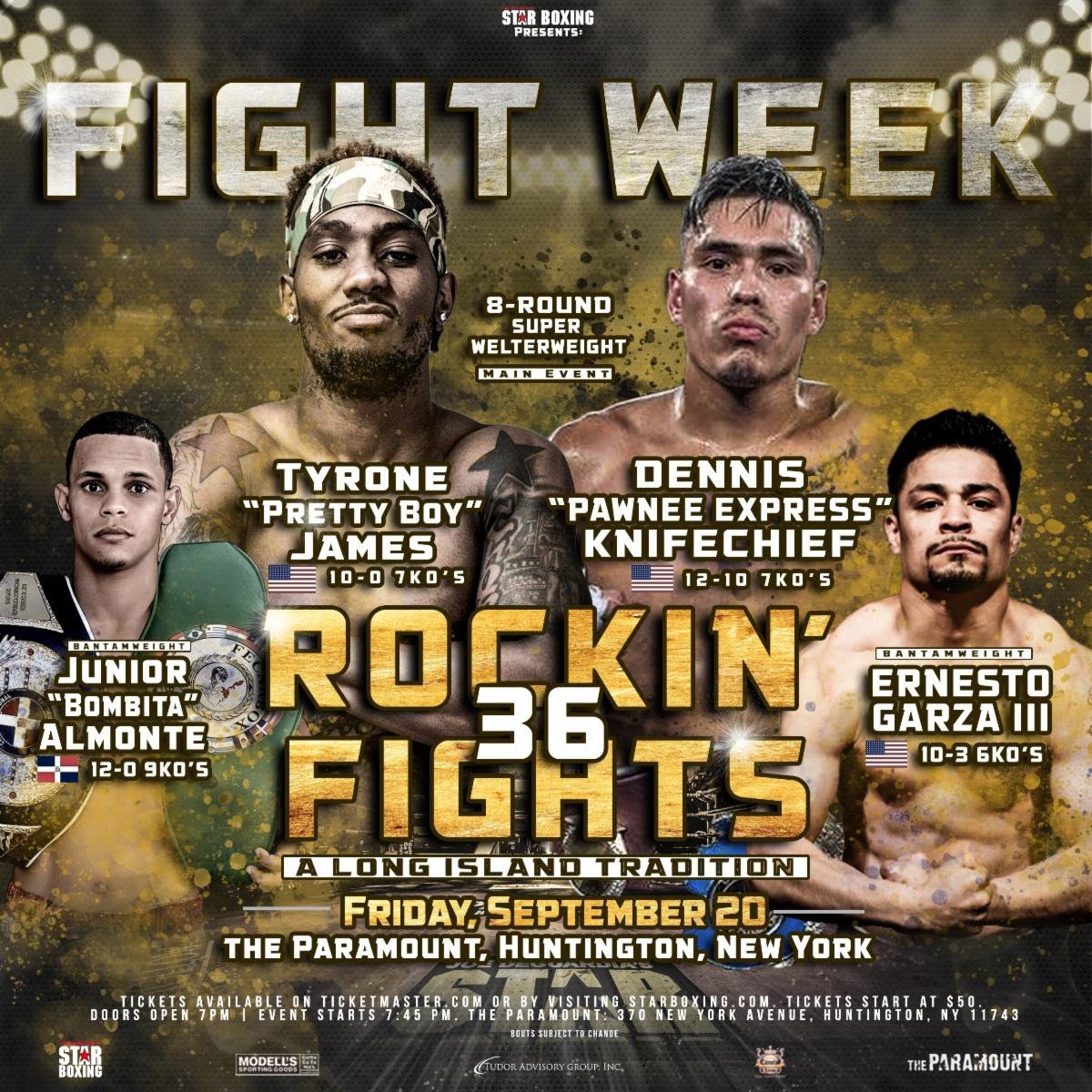 Eight fights ago, “THE JACKPOT” TYRONE “PRETTY BOY” JAMES (Elmont, NY 10-0 7KO’s) entered The Paramount in Huntington, NY for the first time. The date was March 5, 2016 and “The Jackpot” was opposing Neyeine Muang in a 4-round welterweight contest. From that point on, James had one goal on his mind, headline a “Rockin’ Fights.” This Friday, September 20, he will realize his dream as he will be the main event at the storied venue.

Tyrone James has been on some impressive “Rockin’ Fights” cards that include some of Long Island’s biggest success stories. In 2016, James appeared on the undercard of CLETUS “THE HEBREW HAMMER” SELDIN, the record holder for most appearances at The Paramount. In November of 2018, James appeared on the undercard of the orginal king of The Paramount, former World Champion, CHRIS ALGIERI. However, the time has come for James to reach his goal, to have his name next to Paramount legends, who were all developed at the renown venue in Huntington, later going on to be title contenders, and world champions.

Does James feel pressure knowing that the likes of Chris Algieri, Cletus Seldin and JOE SMITH JR. amongst others, were developed and performed at the highest level of the sport by becoming Paramount headliners, exactly where James finds himself on Friday night? “P ressure?” said James, “from what i know, pressure makes diamonds, so if there’s any pressure it must be good pressure for me to succeed.” While he may not feel the pressure of living up to the Paramount legends, James is not taking this opportunity lightly, ” It means a lot to me. A lot of great fighters have headlined at The Paramount, and to have my name beside theirs means a lot.”

As for what fans can expect come Friday night’s main event, as per usual, the charismatic James was not bashful, “fans can expect a great show. Speed, power and flash, because I make sure you see that every time i come out.”

UNDERCARD IS SET FOR A PUÑO LIMPIO, SEPTEMBER 27, IN TRUJILLO ALTO, PUERTO RICO

SAN JUAN, PUERTO RICO- Undercard is set for next Friday, September 27, “A Puño Limpio” series show, which will feature Carlos “The Chosen One” Arrieta at the Rubén Zayas Montañez Coliseum in Trujillo Alto in a presentation of PR Best Boxing Promotions (PRBBP) in association with Spartan Boxing to be broadcast live on www.facebook.com/PRBestBoxing.

“With a total of eight fights we complete the new event of A Puño Limpio, with Carlos Arrieta in a good 10-round event and very interesting fights of good prospects of the Island such as Nicklaus Flaz, Jean Rivera, Mario Suarez, as well as Dominican Víctor Santillán, among others,” said promoter Iván Rivera, president of PRBBP.

The main fight will be between undefeated Arrieta (10-0, 7 kos) and the veteran Panamanian Ricardo “El Matemático” Núñez (29-10, 23 kos) at 10 rounds in 122 pounds. The Puerto Rican comes from wins over the Argentines Ernesto Franzolini and Martín Díaz in his most recent bouts.
The co-main event will be scheduled to eight rounds. The former member of the Puerto Rico National Amateur Boxing Team, Nicklaus Flaz (6-1, 4 kos) will face the experienced Luis “La Roca” Hernández (16-8, 9 kos) at 154 pounds.

Meanwhile, at four rounds Mario Suárez (2-0-1, 1 kos) will face debutant Erick Bautista at 160 pounds; Juseim Cruz (2-1) will fight versus Nick Steven (0-2-1) at 140 pounds, and debutant Jadriel Reyes will fight against an opponent to be announced at 108 pounds.