ANTHONY YARDE SAID he is looking to destroy the winner out of the unification battle between Joe Smith jr and Artur Beterbiev in June in a week where he celebrates clocking up seven years as a professional boxer. (Photo: Queensberry Promotions)

The two light heavyweight champions put their WBO, WBC and IBF belts on the line on June 18 in New York and Yarde is planning travelling over to Madison Square Garden to size up the opposition for his challenge that should come around later this year. 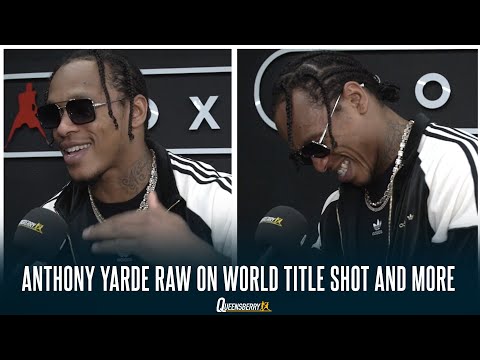 “I am going to keep a close eye on it when they fight each other and I will be looking to destroy the winner,” stated Yarde, who feels his previous world title shot will stand him in good stead.

“I would say there is not as much pressure, but there is always going to be pressure. I’ve got the experience and, with that being said, I feel like I know what I need to do.”

Yarde reasoned that he has no regrets when sitting down with Dev Sahni on the Unibet Lowdown to look back on his seven years as a professional boxer.

Back in May 2015, Yarde took on Mitch Mitchell at Wembley Arena and, 15 seconds into round two, the fight was stopped by referee Terry O’Connor and the first page of the Anthony Yarde Story was written.

Remarkably, just over four years later, Yarde was heading out to the Russian backwater of Chelyabinsk to take on the formidable force of Sergey Kovalev in his hometown with the WBO world title at stake.

Despite an eighth round when Kovalev was on the brink of being blasted out, Yarde took a first career loss and the following year his life circumstances took a big turn for the worse when the pandemic struck and he suffered family bereavements.

His personal losses came in the run-up to the huge domestic clash with Lyndon Arthur and, he says if he could change one thing, he would not have made his pain public knowledge.

“I would never have said it has been seven years already because, when you are involved in it, it goes so quick,” reacted the 30-year-old to his boxing anniversary. “Because we had covid as well, it put more of a spanner in the works and it does feel like it is a shorter time.

“The highs included in my first four years fighting for a world title and that was when it was like one thing after another and rolling very quickly. Then I was coming back and getting everything sorted out before fighting Lyndon Arthur after the covid thing with all the deaths in my family.

“I ended up not getting the decision and had to reassess everything. Again I now feel back on track and feel like my mind is back where it was before.

“I have no regrets and I am happy with the way my career has gone so far. Of course, everyone wants that big hurrah of being undefeated and being invincible, but there is a feeling that you get from bouncing back.

“Even in the last fight there was a lot that I went through mentally and to get the victory felt 10 times better.”

While what doesn’t break you, indeed, makes you stronger, Yarde confirms that his trials have bolstered his mental toughness and it is his job to simply get on with the job.

“Facts. Even before I turned professional I had to come to terms with having to be a performer, an entertainer and nobody cares about your personal life. Although it might be a story and tragedy gives people something to talk about, I had to get it into my mind that no-one cares what you are going through. So get on with it.

“Sometimes it is hard going through things in private, but my one was in public and that is something I have learned. If I do have one regret, when I went through what I did with my family, I should have kept it to myself. I wish I did keep it to myself.

“I feel like it made it harder everyone knowing about it and people posting about it. I got thousands of messages, which was okay in the beginning, but when it got to six or seven months, I was getting reminded when I was trying to heal and it made it harder.

“It has all made me stronger now. When you are a boxer people expect you to have this armour around you to deal with anything. The show must go on and you go and fight. Everyone is different and I feel like I handled it well and have become a stronger person.”

A resounding defeat of Arthur in their December rematch, for Yarde, represented the opening of a fresh chapter in his story and cleared his mind of any lingering gremlins.

“My mind was back where it needed to be, I knew what I needed to do.”

As he will in the next chapter of his story, which will be the winner of the big unification battle between Smith jr and Beterbiev on June 18.

KO King Anthony Yarde (22-2, 21 KOs) is the no.1 contender for American Joe Smith Jr.’s WBO World Light-Heavyweight title, and that fight is likely to happen this year.

The Ilford man is now on a mission to clean up the 175lb division after knocking out Lyndon Arthur in four rounds last month, getting revenge for a controversial points loss one year earlier.

His trainer Ajayi told Dev Sahni on The Lowdown said: “The longer Anthony has to prepare and get better, no one is beating him. I believe this in my heart.

“When the time is right because everything is timing, Anthony Yarde will beat all the guys in a fashion where we won’t leave no doubt, just like Lyndon Arthur.”

Yarde’s outspoken trainer added: “I have said it over the years, ‘Tunde Ajayi has never trained a fighter to win on points.’ Anthony’s record speaks for it. Anthony is a knockout merchant.

“I didn’t see anything new from Joe Smith Jr in his defense against Steve Geffrard. Anthony Yarde is a different proposition.”

“Like us, he has come up the tough way and always had his back against the wall. He is a fighter continually getting better, having dethroned some legends of the sport.

“We went up against a legend (Sergey Kovalev) and come up short. Joe Smith came up against one, Bernard Hopkins, and knocked him out.

“From my perspective, Frank Warren will do what he always does and deliver. The WBO have said Joe Smith has to fight Anthony Yarde next.

“People expect Anthony Yarde to win a World title. Joe Smith talks paydays, and Frank can deliver that. Joe Smith isn’t getting the Canelo fight, so he has to look at us.”

After just 12 amateur contests and 18 professional fights, in August 2019, Yarde traveled to Sergey Kovalev’s backyard in Chelyabinsk and challenged for the Russian’s WBO World title.

Yarde almost pulled off one of boxing’s greatest upsets in round eight, badly hurting the champion, but the Briton’s lack of big fight experience told, and he was stopped three rounds later.

Ajayi says: “With experience comes wisdom. We now have the wisdom not only in the fight but out of it in terms of preparation for a World title fight.

“Even stuff like the media obligations. We never had that before Russia. We just went there with nuts and guts and faith in our abilities, but I think we are there now.

“We are going to become World champions. We have the right team. James Cook has been the cement that we needed to solidify the team.

“We’re looking forward to the Joe Smith fight. That is the only fight on my mind at the moment, but we are not frightened by anyone.”