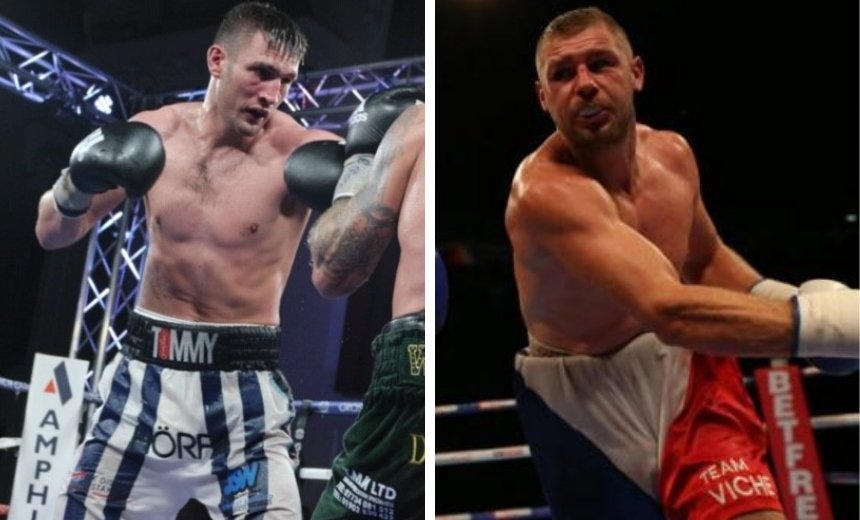 In his first fight at super-middleweight, former British and Commonwealth middleweight champion Tommy Langford (21-3) was made to work hard for his points win against Frenchman Baptiste Castegnaro (8-16) on March 9 at the Walsall Town Hall on a BCB Promotions event.

Langford didn’t have it all his own way against the tough 28-year-old from southwest France with the six-round super-middleweight contest scored at 58-56 to the 29-year-old from Birmingham.

Langford started off on the front foot and took the fight to the Frenchman, who has previously shared the ring with Olympic bronze medalist Joshua Buatsi.

The West Brom FC fan, born and raised in North Devon, was dominant behind his double jab and landed a neat left to the body midway through the first round. Castegnaro did manage to have some success in the opener and when he landed cleanly, it visibly incentivised him to follow up, forcing the home fighter backwards. The French fighter did manage to ruffle Langford’s feathers a little bit, who took a tiny tumble at the end of the opener, but was ruled as a slip.

Langford started the second stanza behind a stiff jab, backing Castegnaro up. They were soon tangled up in the centre of the ring until Castegnaro forced Tommy back to the ropes without managing to land anything at all as Langford ducked and weaved and soon answered with a one-two to the head. It was a clean, controlled round for Langford on the scorecards, as he began to lose his nerves and find his rhythm.

Langford landed a peach of a left hook as the pair traded in the centre of the ring in the third, but Castegnaro managed to score back with one of his own seconds later. This round was contested in close quarters for the first time in the fight as Castegnaro held his feet a bit longer and there was success for both parties during the three minutes of action.

Despite Langford producing the more dominant and aggressive display, Castegnaro enjoyed spells of success and produced a late flurry seconds before the end of the fourth segment.

The fifth round was far more controlled, as Tommy stalked his opponent, who occupied all four corners of the ring for the duration of the round as he attempted to move away from danger. Langford unloaded when he trapped Castegnaro in his home corner and a left hook to the body followed by another to the head sent the Frenchman backpedaling across the ring.

Castegnaro came out swinging in the final round and the pair finished with a firefight in the middle of the ring.

The official scored it four rounds for Langford and two for the visitor.

Langford commented post-fight, “Back to winning ways! I was a little jittery to begin with, I have to admit, but I soon warmed up. To be completely honest, I was actually very nervous and a bit tentative early on, which resulted in a hesitant first few rounds.

“It was to be expected after the lay off and moving up a weight division, but I warmed into it and started to box well and by the end I was really dominating and hurting my opponent, especially with the left hook.

“It was good to get the experience at 168lbs against a fully-fledged super-middleweight who has fought two of the best light-heavyweights in the country in Olympian Joshua Buatsi and English champion Liam Conroy.

“He was a strong, durable opponent, so the experience will be invaluable as I push on to bigger fights. Many others would have had a more conventional or less dangerous opponent for their first step up to a new weight, and, if I’m going to be completely honest, I probably would have liked to have had an easier opponent, but now the job’s done and I’ve come through well, I’m very happy.

“It means the questions that I’ve had have been answered and I’m happy to push on now and look for bigger opportunities at 168lbs.”

The ‘Baggies Bomber’, named so by his huge following of West Bromwich Albion FC fans, has already declared his intentions to become a two-weight British or Commonwealth champion. Zach Parker from nearby Swadlincote is the current British super-middleweight titlist and world title challenger Rocky Fielding last held the Commonwealth strap.

“I’m fully aware that most domestic champions won’t want to give me a shot at their titles, so I’m prepared to work my way into the mandatory position.”

He concluded, “Big thank you to all the fantastic support, it always means a lot. Thanks to BCB Promotions for giving me the platform to fight. We move on to the next one!”

The BCB Promotions ‘Pride of the Midlands’ event also featured Midlands Area middleweight champion Tyler Denny (10-1-2) who earned a shutout points win over six-rounds and has plans to fight for bigger titles in 2019.

Ricky Hatton-trained welterweight Conah Walker (4-0) remained unbeaten as he scored his second KO and unbeaten lightweight Connor Lee Jones moved up to 3-0 with a points win.

Pride of the Midlands

Former British middleweight champion, Tommy Langford, made a winning start to life as a super middleweight on Saturday evening at Walsall Town Hall.

The BCB Promotions show was sponsored by Alliance Scaffolding, Rhino Brickwork, The Village Birmingham-Walsall and Cimac.

Baggies Bomber Langford, making his first ring return since his two wars with Jason Welborn in 2018 (the first of which was awarded BBBoC Fight of the Year), soaked up some early pressure from Frenchman Baptisie Castegnaro to record a 58-56 points win.

Langford grew into the fight and started to use his brains rather than brawn to record a victory over a genuine super middleweight who has shared a ring with the likes of British Super Middleweight Champion Zach Parker and WBA International Light Heavyweight King, Joshua Buatsi.

Midlands Area Middleweight Champion, Tyler Denny, was also back to winning ways as he moved up through the gears to record a shut-out 60-54 win over Lithuanian Vaidas Ballaluskas.

Wolverhampton’s Conah Walker was scheduled for his first six round contest but this one didn’t make it past the halfway point as ‘the Wolf’ blasted out Arvydas Trizno inside three rounds.

The Ricky Hatton trained fighter inflicted only an 11th stoppage defeat in 116 contests over the usually durable Trizno after a string right-hand caught the Lithuania, who
Complained the shot landed to the top of his cranium.

‘Bavvo’ went one better than Walker though; battering Bosnia and Herzegovina’s Katarina Vistica into submission inside two rounds.

Finally, Brierley Hill’s Connor Lee Jones was on the front-foot for much of his bout against Ibrar Riyaz, who was in action for the 165th time. The former amateur stand-out boxed well to record a shut-out 40-36 win.