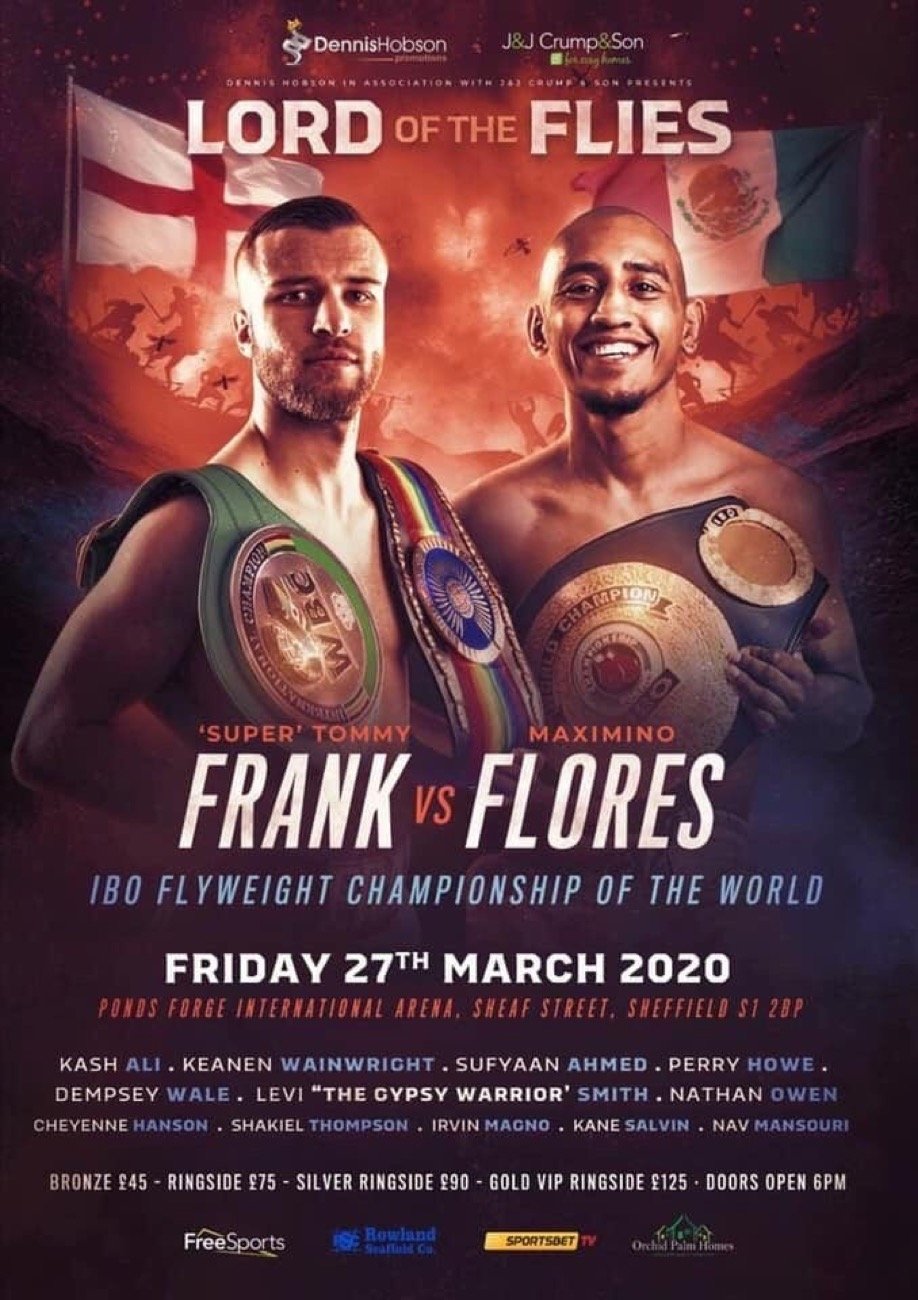 ‘I WANT TO TAKE SHEFFIELD FANS ON AN EXCITING JOURNEY’

As he heads into the biggest fight of his career, proud Sheffield fighter Tommy Frank says he wants to take the city’s fight fans on a journey they’ll never forget, with hopefully some exciting overseas trips thrown into the mix.

In just his fourteenth fight, unbeaten Tommy, 13-0 (3), faces Maximino Flores for the Mexican’s International Boxing Organisation (IBO) World Flyweight Title on March 27 at Sheffield’s Ponds Forge Arena, in what will be a huge night of boxing for the ‘Steel City’.

‘Super’ Tommy already holds titles at super-flyweight, with both the Commonwealth and World Boxing Council (WBC) International Silver straps displayed proudly at home. Last time out in November, in his first title fight at flyweight, the 26-year-old also claimed the IBO Inter-Continental crown, which set him up for a crack at Flores’ full version of the belt.

Despite making the first defence of his title, away from home, Flores will enter the Sheffield ring as the far more experienced man. The 28-year-old has just four defeats from 33 bouts and won’t be fazed by facing Frank on home turf, having won the belt in August last year with an excellent ‘on the road’ win in the Philippines.

“How many times have I topped the bill now in my home city, it’s got to be five or six times, it’s amazing,” said Tommy, who trains out of the Sheffield Boxing Centre. “I’m just a young, normal lad from Sheffield who’s just working hard and loves what he does. I’m just trying to be the best at what I do, so to top the bill in Sheffield in a world title fight – what an achievement; it’s something I’ll be telling my grandkids.

“Winning titles is great, but we’re also making memories on the way that people won’t forget, that’s really important. I love the Sheffield people, I feel like they’re really getting behind me, and hopefully that will keep growing with every fight. I’m not getting too far ahead but, hopefully one day, I can take these Sheffield people to Vegas and New York, with some big fights in years to come. I just want to take the fans on an exciting journey.”

In just his 14th fight, Tommy Frank will get the opportunity of a lifetime when he challenges for the International Boxing Organisation (IBO) World Flyweight Title on March 27th in his home city of Sheffield.

Promoter Dennis Hobson has produced a masterstroke by persuading Mexican champion Maximino Flores to make the first defence of his belt against ‘Super’ Tommy at the Ponds Forge Arena, and the huge Sheffield United fan couldn’t be happier.

Frank, 13-0 (3), picked up the IBO Inter-Continental Flyweight crown in November with a dominant win over another Mexican fighter, Martin Tecuaetla. That title was another addition to his burgeoning collection, alongside the Commonwealth and World Boxing Council (WBC) International Silver Super Flyweight belts.

The 26-year-old knows that he faces a real battle to achieve his dream of ‘world champion’ status against Flores, though. The South American, 28, is vastly more experienced, with just four defeats from 33 bouts and, having just won the belt in August last year with an ‘away’ win in the Philippines, will be confident of upsetting the home support.

“I’m absolutely over the moon,” said Frank. “It’s something I’ve dreamed of, fighting for a world title, since I first started boxing at 12. When you pick up titles like the Central Area, Commonwealth and WBC ranking titles, it’s brilliant – but to be fighting for a belt that says ‘world champion’ on the front, it’s unreal.

“As always I can’t thank my training and management team of Dennis [Hobson], Steve [Crump] and Glyn [Rhodes] enough for pulling this together. Obviously, at the moment I’ve got my head down and am fully focused on Flores. Hopefully though this is just the start of something massive, and it’ll open the floodgates to even bigger things.”

Mexico’s Flores will make the first defence of his ‘world’ crown against Frank, and Hobson says this is the perfect opportunity for his fighter to announce himself on the world stage.

Unbeaten Tommy, 13-0 (3), hasn’t put a foot wrong since turning pro. The 26-year-old already holds the Commonwealth and World Boxing Council (WBC) International Silver straps at super flyweight, along with the IBO Inter-Continental crown at the weight below. If he can wrench away Flores’ ‘world’ belt then he puts himself in contention for more major fights at world level and maybe moves a step closer to his dream of fighting in Las Vegas, one day.

If he is to remain unbeaten, the huge Sheffield United fan is going to have to put in a career best performance against Flores. The South American, 28, is vastly more experienced, with just four defeats from 33 bouts and, having just won the belt in August last year with an ‘away’ win in the Philippines, will be determined not to return home without his title.

“Me and Steve [Crump] are determined to get our fighters onto the world stage, and obviously Tommy is the one that’s developed the quickest,” explained Hobson, who has previously guided a number of fighters to boxing’s highest honours. “He’s a great kid to work with and this is a platform for him to win a version of the world title. He’s going to be in with a tough Mexican though, because there aren’t too many soft ones!

“We’ve done everything we can do, we’ve secured the fight, he’ll be in his home town and hopefully he can get hold of this title. He’ll then be another world champion to come out of Sheffield and it’ll push him on, and boost everyone else in our stable. It’s in Tommy’s make up to leave nothing to chance in his preparation and hopefully he can put on a big performance on what will be a special night for the city.”