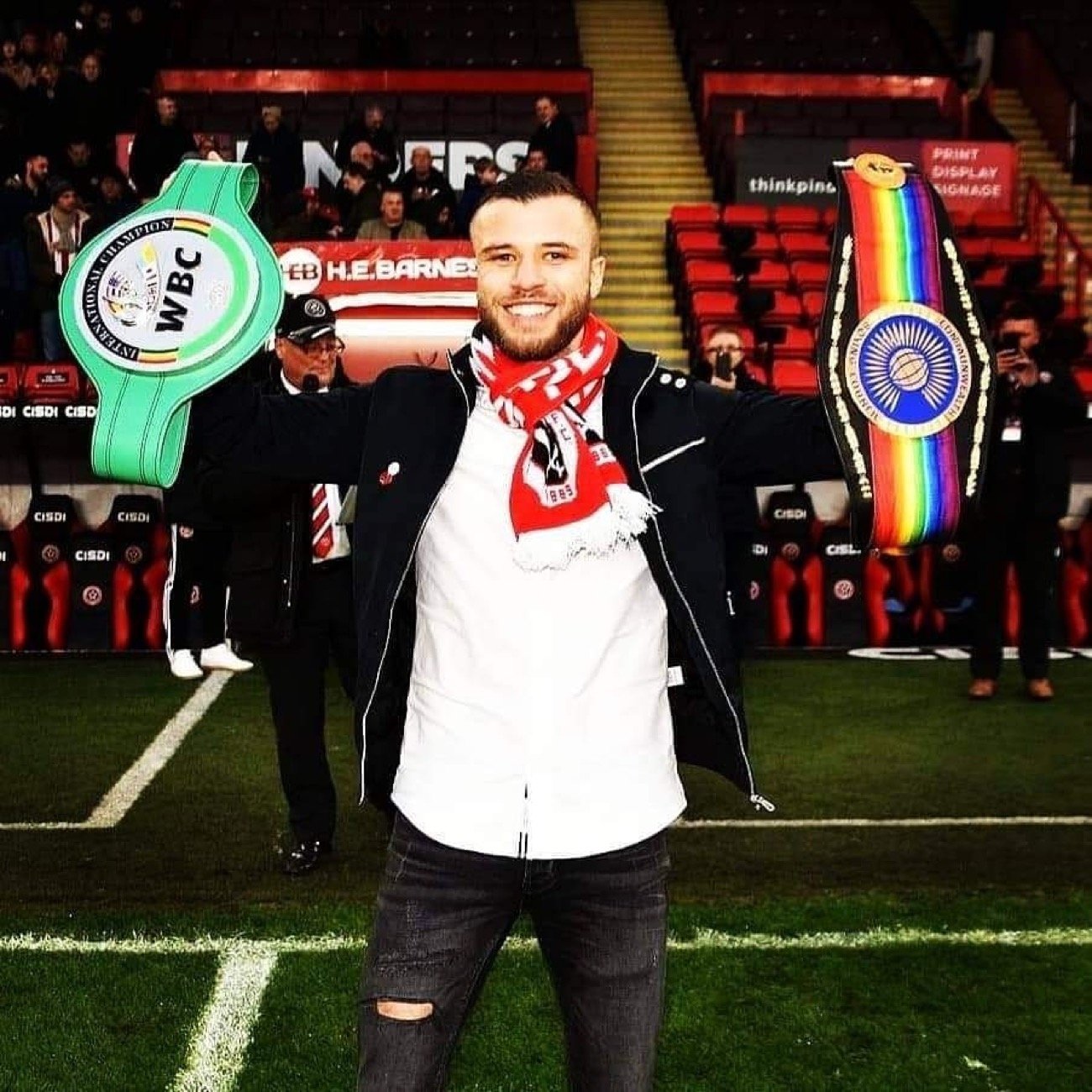 If ‘change is as good as a rest’ then Tommy Frank is onto a good thing. The unbeaten flyweight, 13-0 (3), will now face Mexico’s Rosendo Hugo Guarneros at Sheffield Arena on December 11 for the International Boxing Federation (IBF) Inter-Continental Title, making that his third slated opponent in as many months.

Tommy was originally due to face fellow Sheffield fighter, Kyle Yousaf, for the Lonsdale Belt but that match fell through after Yousaf tested positive for Covid-19. Rising prospect Harvey Horn was then drafted into the opposite corner, only for that fight to fall by the wayside in recent days.

Now, ‘Super’ Tommy will take on Mexican Guarneros on the UK’s first ever drive-in boxing show, live on Eurosport, in what will be a good indicator of level for Frank. The South American is known to British fight fans having shared a ring with Sunny Edwards in September last year; with Sheffield-based Edwards handily beating the tough guy over 10 rounds. Guarneros, 30, will have good ambition coming into the bout, having lost just four times in 23 outings, and with a reputation for Mexican grit.

It’s been a morale-sapping year for Tommy, 27, who saw his dream of fighting for the International Boxing Organisation (IBO) World Title snatched away in March after the national lockdown put paid to sport in the UK. An ultimate professional, the ‘Steel City’ fighter has remained in the gym throughout 2020 and will want to see out the year by taking out his frustration on late sub, Guarneros.

“We couldn’t make the Harvey Horn fight for the British Title, and then were going to do it for the IBF European belt, but ultimately couldn’t agree terms,” explained promoter Dennis Hobson, who has been working on a replacement opponent alongside partner, Steve Crump. “Obviously with the show just a couple of weeks away, we’ve had to move quickly to secure an opponent, and Steve and I have managed to get in Guarneros.

“I have a really good relationship with the IBF and have managed to make this for the Inter-Continental Title, which is prestigious with the IBF and will give the winner a world rating. This kid is going to be a tough test. Sunny Edwards is close to world level and he fought him just a couple of fights ago, and he had to get on his bike because the Mexican was causing some problems and giving him a test. This fight is at least at the same level, if not better, than Kyle Yousaf or Harvey Horn.

“It’s a really good yardstick for Tommy to see what level he’s at. We believe we are at the same level as Sunny, and think that’s a world title fight further down the line, so this fight will be a good marker. This’ll be a cracking fight to watch, because Mexican’s aren’t known for taking a backward step. Tommy will use his skills but he won’t be too far out of distance either; he’ll also be on his front foot and mix it up more than Sunny, which can make him more vulnerable.

“Styles make fights, I’m pleased we’ve finally secured Guarneros. Tommy might feel he has a point to prove and may want to get him out of there at some point too.”

The pair will clash for the International Boxing Federation (IBF) Inter-Continental Flyweight Title live on Eurosports, with the winner catapulted into the IBF world rankings.

Unbeaten Frank, 13-0 (3), will need to be on top of his game against his more experienced opponent. The South American has lost just four times in 23 fights, and knocked out 8 adversaries.

No stranger to these shores, Guarneros, 30, was on the front foot all night against highly-rated Sunny Edwards in September last year and, despite losing widely over 10 rounds, is adamant he won’t return to his homeland empty-handed against Frank.

“I am very motivated about this big opportunity and this time I will perform better than in my previous fight in the UK,” explained Hugo.

“I know Tommy is a very good boxer but not much else because I let my coach take care of analysing him and designing the strategy for the fight.

“This will be a very exciting fight which people will love. It will be very tough but I know I’ll win because I’m more experienced now. I had a 10 round fight recently, which I won, so I’m very confident for December 11.

“To win this title will be the biggest achievement of my career up to date and after that, I’ll be looking at getting a World Title shot.”

FRANK ON SAME LEVEL AS WOODS

Frank has endured a nightmare year having seen his dream shot at the International Boxing Organisation (IBO) World Flyweight Title scuppered in March due to the national lockdown. The 27-year-old finally gets his first outing of 2020 on December 11 when he meets Mexico’s Hugo Guarneros on the UK’s first ever drive-in boxing show, live on Eurosport. The pair will meet for the International Boxing Federation (IBF) Inter-Continental Title, with the winner ensured a high IBF ranking.

Unbeaten Frank, 13-0 (3), will need to be on top of his game against Guarneros. The experienced South American – who has lost just four times in 23 fights, and knocked out 8 adversaries – is no stranger to British boxing fans. The 30-year-old took on world-rated Sunny Edwards in September last year and, despite losing widely over 10 rounds, gave a good account of himself, showing typical non-stop, Mexican aggression.

Guarneros is actually Tommy’s third scheduled opponent for the unique show. Originally the Sheffield man was due to face local rival, Kyle Yousaf for the British Title before Yousaf tested positive for Covid-19. Highly-rated prospect Harvey Horn was then drafted in before withdrawing from the opposite corner slot. Despite the upheaval, which has also included a date change for the show, Frank – who is a disciple of positive thinking – remains remarkably unfazed.

“Tommy is so focused, it’s unbelievable,” explained Rhodes, from the Sheffield Boxing Centre.

“I’ve been involved in this game for a long time and with some great fighters, but Tommy has got to be the best pro I’ve ever had. I don’t necessarily mean as in ability-wise, but for his dedication and approach to boxing, it can’t be beat. When the IBO World Title fight got cancelled I was gutted for him, but he just took it in his stride with his positive thinking. He’s had a couple more fights fall through since then but he believes everything happens for a reason and he’s said ‘I’m not bothered who I fight, just as long as there’s someone else in the opposite corner’! That’s a great attitude for a young professional.

“The guy that I always hold up to the young kids in the gym is Clinton Woods, because he was the first in the gym and the last out. If he said he’d done his road work then he’d done it, unlike some other fighters. Tommy has a similar work ethic to Clinton. Both of them are maybe not the most talented fighters in the world but their attitude to training and living the life as a boxer is second to none. Attitude is a little thing that makes a huge difference. He’s a lovely kid too, well spoken and it isn’t his style to start throwing tables over at press conferences. I’m happy with him as he is and continuing what he’s doing.

“This fight against the Mexican will be a good test for Tommy and I’m really looking forward to it. Sunny [Edwards] boxed on the back foot all night against him, and it will be similar with Tommy but he is more prepared to plant his feet and exchange more. We’re expecting a good fight because this kid is coming to win, and we’re prepared for whatever he brings. He’s as tough as old boots and he’ll be chasing Tommy all over the place, it has all the ingredients of a great fight.”

The action will be broadcast live by Eurosport.