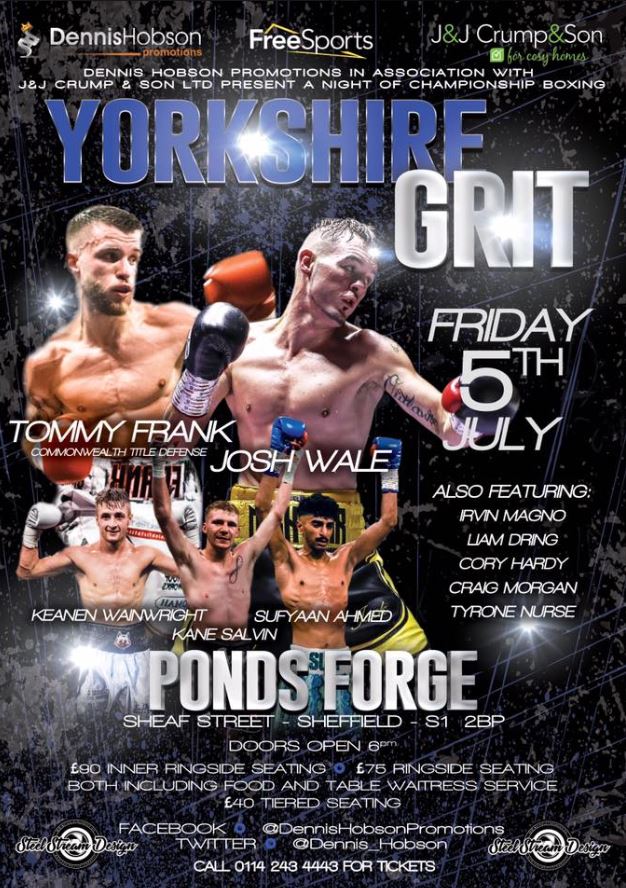 TOMMY FRANK: ’I’LL LOOK GOOD, AS I ALWAYS DO’

The ‘Steel City’ fighter will be making the maiden defence of his Commonwealth Super Flyweight Title, which he won by demolishing Belfast’s Luke Wilton in four clinical rounds in March.

Tommy, 25, is still a relative novice in the pro ranks, but the skillful technician hasn’t put a foot wrong in building up his ledger to 10-0 (2), and is promising to shine in front of his home crowd.

Tanzania’s Kibazange will make his first visit to the UK when he faces Frank. The African has been beaten just three times in 17 outings, and should be determined to make the most of this big opportunity.

Also topping the bill on the night will be Barnsley’s Josh Wale, who will appear in a Commonwealth Featherweight Title eliminator against Ghana’s Ekow Wilson.

“Me and Glyn [Rhodes] have had time to have a little look at Kibazange, but I don’t really study opponents too much because they could do the opposite thing on the night,” explained Tommy. “I just concentrate on being the best version of me, and that will beat anyone.

“The Commonwealth Council have sanctioned him, and he’s going to be well up for it. He’ll give it a real go, and that’s what we want. I’ve worked hard to get the Commonwealth belt, and I’m really excited to be defending it.

“I fought Adam Yahaha [October 2018], who was also from Tanzania, and got 10 good rounds in. And on the same show, his team mate caused an upset by stopping Loua Nassa. So, it’s a big opportunity, this guy will be up for it, and I really hope he is because that will suit me perfectly. I’m going to look good in this fight, as I always do.

“We are looking at going down the IBF route too, and Dennis [Hobson] has been over to the IBF convention recently, representing me over there. So, I’ll defend my Commonwealth Title on July 5, and then maybe in September go for some kind of IFB title. I’m very excited to be defending my belt though, it’s great winning titles but defending them is even better.”

Tommy will make the first defence of his Commonwealth Super Flyweight Title against Tanzania’s Jemsi Kibazange, while Josh will take part in an eliminator for the Commonwealth Featherweight belt against Ghana’s Ekow Wilson. Also appearing on the card will be former British light-middleweight champion, Tyrone Nurse, who is now part of Hobson’s stable.

Sheffield fighter Frank won the Commonwealth Title in March when he impressively stopped Belfast’s Luke Wilton in four rounds. Now undefeated in 10 fights, with two KOs, the 25-year-old will look to consolidate against Kibazange, who comes to the UK having lost just three fights in 17 outings.

Former British Bantamweight Champion Wale is intent on kick starting his career at featherweight. Contentiously losing a European Title tilt in October 2018, the Barnsley man believes a move up the divisions will suit him as gets ready to face hard-hitting Wilson, who has 16 KOs from 18 wins, with only three losses on his ledger.

Huddersfield’s Tyrone Nurse won the British Light-Middleweight Title in 2015 before losing it to world-rated Jack Catterall two years later. The 29-year-old will be taking part in his 44th contest at Ponds Forge and, after teaming up with Hobson, is hoping to get back into title contention.

“Tommy and Josh have both got international opponents with good records,” said Hobson. “Tommy has just won the Commonwealth, so it’s a matter of consolidating as the champion. Fighting this opponent will season him. There are other people calling him out, but Tommy’s on the right track, and it’s a just a matter of getting that little bit of extra experience, and then we’ll move onto the world scene. That’s how I’ve done it before, we’ve got a blueprint and it will serve us well with Tommy’s career. Because he’s a champion he gets offers but it doesn’t mean it’s the right move, boxing is all about timing. We’re getting the right fight for Tommy at the right time, while we continue to look at other avenues.

“Tommy is very level-headed, he trusts me and Glyn [Rhodes] to guide his career, like I have with the likes of Clinton Woods and Jamie McDonnell, getting them to the position where they can earn some proper money, and meaningful titles. That’s always what I’ve tried to do for my fighters, and it’s the same for Tommy. I like him as a fighter and a human being, and potentially he can be a little superstar in Sheffield. I’m looking forward to the ride.

“Tommy won’t know too much about Kibazange, so let’s see how he deals with him on the night. On one of our shows not so long ago, we had an opponent from Tanzania turn over Loua Nassa from our stable, so you never know what you’re going to get with these African fighters, and Tommy will have to be on his guard. But I’ve got a lot of confidence in him, even though he’s only had 10 fights. He’s already done well winning the Commonwealth, but that’s just part of the journey, there’s a lot more to come from him. It’s my job to help him do it at the right fight at the right time.

“I think Josh will have too much experience for his opponent, but it won’t be a walk in the park. He’s stepping up to featherweight, where he feels comfortable. He’s 31 now and although he’s had 40 fights, he’s fresh because he lives the life. There’s plenty of mileage in him, and hopefully featherweight will suit him. I’ve got confidence in him and think he can win at least a Commonwealth. He’s just got to keep winning, and I’ll do my best to progress his career and get him involved in title fights.

“I’m excited that Tyrone has joined us. Coming with us, he’s got another opportunity, and hopefully he thinks, ‘Dennis can deliver, if I can’. Hopefully he’s not too worn because he’s had some tough fights and been in the game a long time. He’s a very good fighter though, I’ve always rated him and he’s obviously capable of winning titles, it just depends how fresh he is. I think he is though and that’s why I wanted to sign him.”

Dennis Hobson Promotions, in association with JJ Crump, present an evening of boxing at Sheffield’s Ponds Forge Arena on July 5. Topping the bill will be Sheffield’s Tommy Frank and Barnsley’s Josh Wale.