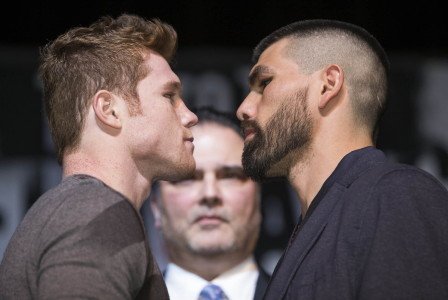 Molina is facing some legal obstacles, however, and as of late Thursday, his fight with Charlo was in jeopardy of being cancelled.

Richard Schaefer, CEO of Golden Boy Promotions and the emcee at the final press conference streamed live at sports.sho.com, alluded to the uncertainty of Molina-Charlo and announced that, if necessary, it would be replaced with a 135-pound matchup between Ricardo Alvarez (23-2-3, 13 KOs), an older brother of Canelo, and Sergio “Yeyo” Thompson (28-3, 26 KOs).

“There are some issues which Carlos Molina is facing related to some outstanding warrants,” Schaefer said. “His legal team and his promoter are currently working on trying to sort these issues out and have him ready, hopefully, for the weigh-in and ultimately for the fight. I know that Molina wants to fight and I know he has a team behind him which is going to do whatever it can to get him here in time.”

Tickets for the event promoted by Golden Boy Promotions are on sale and priced at $600, $400, $200 and $100, not including applicable service charges and taxes, with a total ticket limit of 10 per person. To charge by phone with a major credit card, call Ticketmaster at (800) 745-3000. Tickets also are available at www.mgmgrand.com or www.ticketmaster.com. Movie theater tickets are available at participating theater box offices and online at www.FathomEvents.com.

Below is what the fighters, their camps and executives said at Thursday’s final press conference at The Hollywood Theatre inside the MGM Grand:

“There isn’t much more to say – I’m ready to go. Boxing is about style and I think with his [Angulo’s] style and my style it will be a war. We are going to give you a war. I always say talk is cheap so we’ll see what happens on Saturday night.

Jamaine Ortiz made his bones in the amateur ranks vs. Berlanga, Teofimo and Jaron Ennis

“It is a big responsibility to headline on pay-per-view. It shows the end result of everything I’ve done in the gym.

“Angulo is a very dangerous opponent. He doesn’t mind getting hit as long as he can hit back. It’s a fight that can change in one punch on either side.

“I’m calm and tranquil because that’s part of the preparation for this fight.

“I know I’m strong, I know what I have to do. I will follow my game plan and come out with the win.

“Angulo keeps coming forward, breaks you down and keeps coming. It’ll be challenging to get a knockout against a guy like Angulo, but you can’t blame me for trying.”

“At this point, there is not much to say except that all of us in Canelo’s camp are ready. Both fighters are ready to fight. Saturday, the world will see a great fight between two Mexican warriors.”

“We’ve had a great 10-week camp. It’s always tough to be away from our families, but this is our job. We are well aware that Angulo is a dangerous puncher who can change everything with one punch. That being said, we’re ready for him, whether he wants to stand or to box. Canelo also has a punch. On Saturday, Canelo is going to give his fans a great victory.”

“I want to thank everybody – Golden Boy Promotions, SHOWTIME, MGM Grand, all those working on this event, my team – for this opportunity and for their faith in me. I’m ready.

“I’ve been working very hard for this fight, and I could not be in better condition.

“Between Canelo and me, this is going to be a great fight, a really, really great fight.”

“This is my first time on pay-per-view and to be the co-main event is very exciting. Thanks to everyone who got me to this place.

“I just feel 100 percent ready. I know Mijares is a great fighter. I watched him fight when I was growing up and getting my career started so I know this is going to be the hardest fight of my career. But that’s why we trained really hard – to give a great fight to all the fans and to make the fight of the night.

“It’s going to be really hard [to be the fight of the night] because Canelo and Angulo are great fighters so we’re going to have to work really hard to beat them. But we’ll try our best and give our fans a great fight.”

“I don’t have much to say. The fight is almost upon us. Like Leo, I can guarantee that his is going to be a war on Saturday night. It’s almost time. I just want to make weight. I’m definitely ready to fight.”

“I’m 17-0, 23-years-old and fighting on the big stage at MGM. I definitely feel I belong with Canelo and all of the other young fighters. I’ve been on weight for a month.

“Obviously, I want the fight to happen. If it doesn’t, I will fall short of my goal. I know I’m ready, my team is ready, and the city of Houston is ready for me to bring home that world title. I’m going to continue to train and think like it is happening.

“I’m sure I will be very, very disappointed if it doesn’t [happen]. When I was first told that something was up with Molina, I thought they were playing with me, figuring here I am, on the eve of being on boxing’s biggest stage, there’s no way we don’t fight. But it was not a joke.

“If we don’t fight, I’m just going to work that much harder.”

“I have prepared myself very well for this fight. I thank Golden Boy Promotions for giving me this opportunity, just like they did last year. I may not have the most experienced record on this card, but I can assure you that I will give 100 percent of myself for this. I’m looking forward to a great fight the day after tomorrow.”

“My fight with WBC Lightweight Champion [Omar Figueroa Jr.] fell out, but I’m still here, I’m still ready to fight. We all know accidents happen in boxing, but I’m happy to be here on this big stage. I’m here and I’m ready to fight.”

“There seems to be a shift going on. More and more fighters, trainers and media members are starting to say, ‘You know what, I’m changing my opinion. I think Angulo is going to knock Canelo out.’ And I think it is this kind of sentiment that shows you what we want to do – we want to put on great fights. Of course, each guy wants to win and they know how important it is for them, their fans and Mexico. Both Canelo and Angulo don’t need any extra motivation. They know it’s a very dangerous fight.

“Talking about warriors and TOE TO TOE action, it doesn’t get any better than the fight between Leo Santa Cruz and Cristian Mijares. Leo is one of the most exciting fighters in boxing and Mijares is a former world champ who wants the belt back. Neither fighter is afraid of anyone.

“If I could watch Nihito Arakawa every day I would. He is the definition of a modern-day gladiator. He fights with hearts, guys and he is everything a fighter should be. We’re all looking forward to watching him and Linares in what should be a war.

“We believe Ricardo Alvarez is ready to fight for a world title. He has to do a little detour because of the injury to Omar Figueroa Jr., but he’s facing an extremely tough fighter in Sergio Thompson.”

“Over the last year, SHOWTIME and SHOWTIME PPV have become the premier destination for big-time boxing. SHOWTIME has given boxing fans more live fights, more replays of classic fights and more total hours of boxing programming – and we’ve done it with state of the art technology like the 4K cameras and super slo-mo replays and social media integrations, things our competitors aren’t doing. We are committing more resources to boxing programming than anyone else in the sport today – and the viewers have responded enthusiastically, as our audience share has increased by leaps and bounds.

“Our success has been the result of two key factors: (1) We work with first-class partners such as Golden Boy Promotions and the MGM Grand and (2) is the quality of our fights. We put on great fights, competitive fights and this card is a great example. It’s an entire card of pay-per-view-action fighters that is guaranteed excitement.”