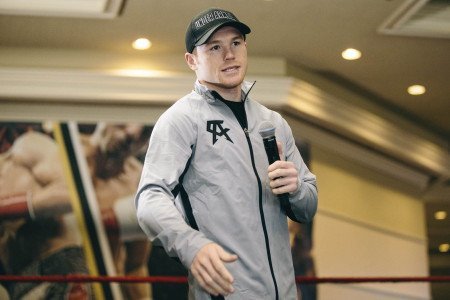 Tickets for the event promoted by Golden Boy Promotions are on sale and priced at $600, $400, $200 and $100, not including applicable service charges and taxes, with a total ticket limit of 10 per person. To charge by phone with a major credit card, call Ticketmaster at (800) 745-3000. Tickets also are available for purchase at www.mgmgrand.com or www.ticketmaster.com. Movie theater tickets are available at participating theater box offices and online at www.FathomEvents.com.

Below is what the fighters said at Wednesday’s workouts:

“Between the fans, my family and myself, I’m always motivated for my fights. The support I get has always motivated me. I fight for them, on behalf of them. Everything I have is because of the fans. I know I’m young and they have so much faith in me. I can just be who I am and continue to work as hard as I can.

“Angulo presents a difficult challenge because he’s a fighter who can punch and take a great punch. I know I have to prepare and establish my game plan early. But you know how it can be with game plans. Sometimes, once a fight starts, you have to do what you have to do win and that’s what I am going to do on Saturday.

“Obviously a knockout would be beautiful; that’s what the fans like, an impressive knockout. But I never go into a fight looking for knockout. If it comes, it comes.

“Everyone says Angulo is the stronger guy, but I think I’m the strongest.”

“Style-wise, this is a great matchup for the fans and both of us. Fans are going to get a great fight.

“I’m ready to chase him or fight him like a true Mexican warrior.

“I plan to test him like he’s never been tested before. I don’t think anyone has ever hit Canelo as hard as I’m going to hit him.

“I’m totally relaxed and confident. Camp was amazing and I am in unbelievably great shape.

“There were a couple times when I was in the immigration detention center (January-August 2012) that I wanted to quit. But my team of lawyers always motivated me, wouldn’t let me stay down for too long and kept telling me that justice would prevail and that I shouldn’t give up.

“I always dreamed of being a headliner on a major card, and here it is. I am so ready for Saturday.’’

“This is going to be a great fight, a war. I have a lot of respect for Mijares, who was a great champion and is still very fast. His style can be complicated which is why I’ve been working in the gym with southpaws who are like him.

“I feel [Cesar] Seda was stronger, younger and faster than Mijares.

“I never enter the ring thinking I’m going to lose, so if he says he can see something in me that indicates that, well, he is very wrong. I am going to stop him.’’

“This is such a great opportunity for me. I totally feel like I’m catching Leo at the right time. He’s a great, young champion and I know this is going to be a difficult fight. But I have too much experience for him, too much overall speed.

“I think Leo found out in his last fight that he is vulnerable. I can see in his face, the look in his eyes, that he’s going to lose on Saturday. I am very confident.’’

“This fight is a stepping-stone in my career. In order to be the champion that I want to be, I have to get past this obstacle. He has the title, he has what I want.

“I’m not fazed by the spotlight or the world championship. This is where I belong. I trained hard and will leave it all in the ring.

“I already feel like a world champion and I’m here to prove that I’m ready for this level. I’m going to show everyone that I’m here and that I’m going to be here for a long time.”

“The battle has already started; we just haven’t shot the first bullet yet. But we are both ready for war. We need to be.

“It’s difficult to knock him down but it’s not impossible. He certainly won’t fall with one punch, and that’s why I’ve prepared for 10 rounds of action..

“You can’t compare my style with Figueroa Jr. We are completely different fighters. I have to break him [Arakawa] down with my speed and intelligence. I can’t fall into his territory and fight his fight.

“I think there is a better chance that the ref stops this fight than it ending in one punch. I’m going to break him down little by little.

“This is the biggest opportunity for me at this point in my career. My mind is just set on winning. It’s been a long time coming so I know I need to be ready for this opportunity. Whoever they put in front of me I can beat.

“Fighting here at MGM pumps me up even more. It gives me a little something extra every time I fight in Las Vegas. I won my first title here in Vegas [at Mandalay Bay], but the difference is now people know who I am and they give me respect.”

“[In my last fight] I just did what was natural, which is to fight until the bell rings. I didn’t win but I fought my fight. I’m going to fight with the same style and aggressiveness, but this time I will get the win.

“I’m very happy to get the nickname ‘The Japanese Rocky.’ It’s an honor to earn a reputation like that after just my first fight in the United State. It’s an honor to represent my country with this nickname.

“Spirit-wise, I won’t change. I will fight until I win. I’ll fix my defense and the issues I had against Omar [Figueroa Jr.] to ensure that I get a win. I have a huge opportunity and I’m going to take advantage of it.”

“[On the injury to Figueroa Jr.]: That’s the way boxing is. These types of things happen. But I’ll be fine. I’m just happy to be able to fight on this card.

“In my last fight, I had a fighter that was moving a lot. It probably wasn’t’ the best for my style, but you learn each time you step in the ring. This time, I’m going to move forward and be aggressive. I’ll keep my style that I’ve always had to satisfy the fans.

“Omar and Sergio [Thompson] have similar styles so the late change doesn’t bother me that much. I’ve prepared for a world title fight so I’m ready for everything.

“There is some sense of pride [fighting on the card with my brother]. I’m so happy for him and all of his success. But it’s important for me to break away from that and fight my own fight. At the end of the day, Canelo will not get in the ring with me.”