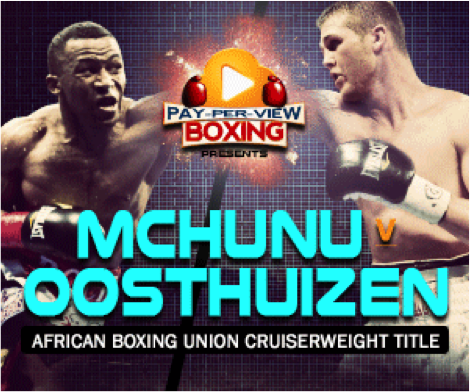 On Saturday, September 1st, KlowdTV will present a battle between highly regarded cruiserweights, Thabiso Mchunu and Thomas Oosthuizen in a 12-round bout from The Emperors Palace in Kempton Park, South Africa.

The fight will mark yet another world-class boxing event that KlowdTV is bringing to the fans in the United States.

“This continues a great run of fights that we are excited to bring boxing fans in the United States,” said KlowdTV President, Robert Herring, Sr. “This is another terrific matchup, and we will continue to stream the top fights from around the world. There is a thirst for these fights, and KlowdTV promises to continue to serve up great events.”

Mchunu of Cato Ridge, South Africa has a record of 19-4 with 12 knockouts.

The 30-year-old southpaw has been a player in the cruiserweight division for the better part of the last decade.

Mchune lost in his bid for the WBO Cruiserweight title on December 17, 2016, when he was stopped by Oleksandr Usyk.

Oosthuizen of Booksburg, South Africa has an impressive mark of 27-1-2 with 16 knockouts.

Oosthuizen is coming off his 1st professional defeat when he lost by a decision to world title challenger Igor Mikhalkin on May 19, 2017, in Germany.

A full undercard and start time will be announced shortly.

KlowdTV is a 24/7 live streaming service that has over 32 live channels and 50 music channels.

The Mchunu v. Oosthuizen bout is available on KlowdTV to United States viewers only. There will be no free trials available for live boxing events.