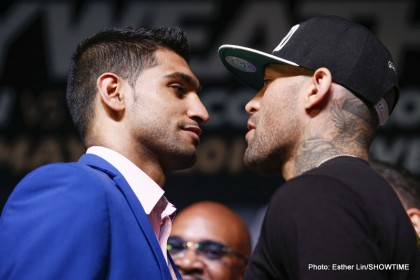 LAS VEGAS (May, 1 2014) – Undercard fighters from “THE MOMENT: Mayweather vs. Maidana” took the stage at the Hollywood Theatre at MGM Grand today for the final press conference before their fights this Saturday, May 3, at the MGM Grand Garden Arena live on SHOWTIME PPV®.

Below is what the fighters from this stellar televised undercard had to say:

“This is a great event, every fight here could be a main event. There’s a lot of great fighters up here.

“I’m excited to put on a great show. I’ve trained my way up to this weight. The hand speed and movement is always going to be here but there are a lot of news things you will see.

“I’m going to put on a great performance and I hope we give the fans what they want.

“Spending this time with (trainer) Virgil Hunter has only made me a better boxer. This is the only time I’ve had time off to rest and take a break from boxing.

“As long as I put on a great performance I’ll earn that shot [at fighting Mayweather]. But, to be honest, I’m not looking past Collazo. I need to win this fight and take it from there. I need to put on a good performance and we’ll see what happens.

“It’s going to be a hard fight. It will be tough and exciting, but I think I have all the tools to beat him.

“I’ve been working hard and improving myself. It’s not like I’ve been taking time off. I’ve been sparring and working on my style.

“He’s coming off a big win so I know it won’t be an easy fight. I’m looking to make a big statement on the Mayweather undercard.”

“This is the highest of the high for a boxer and I’m humbled by the opportunity.

“It’s been a tremendous ride. I’m blessed to be here and soak this moment in.

“Khan, welcome to the welterweight division. Once the bell rings you’re going to see the best Collazo you’ve ever seen.

“I’m going to give the fight fans what they want; make sure you tune in and don’t miss it. It’s going to be a special night.”

“I’m coming to do damage. I’m punching with bad intentions and I’m back on my A-game.

“I’m thankful God slowed me down and showed me how to be humble. I know he can take it all away.

“We’re ready. Come Saturday night this is pay-per-view, so you know we’re going for broke on this one. We’re letting our hands fly.

“I know I’m going to have a lot of great fans after this victory.”

“This is a crazy card to be on. All these guys up here are coming to put on a show and I’m looking to do the same thing.

“I know Periban is a tough, rugged fighter and I’m prepared for that. I’ve had a great camp. My trainer pushed me to the limit.

“We’re in this to win and we want to let you know that I am the future of this sport.”

“I just want to invite everybody to watch this fight. It’s going to be great, and I’m prepared.

“Saturday is going to be a great show, a great fight. I’m well prepared for this. I’m going to give every ounce of me so that I can regain a title shot. That’s what I’m here for.

“I know that J’Leon is a strong fighter and I have to give a strong performance. That’s the only way I can win.”

“Thanks to everyone for coming out. Like others have said, you can’t call this an ‘undercard’ because these are all great fighters. It will be an exciting card.

“The official weigh-in is Friday, and it starts at 2 o’clock. Floyd wanted to do something different. 2 Chainz will be performing live at the weigh-in. It will be an event within an event.”

“This isn’t an ‘undercard.’ This is an accumulation of three main events under the Super Bowl of boxing between Mayweather and Maidana. Each one of the TV fights could have its own TV platform and venue and would be a main event in many other boxing programs.

“Of course when you think of Las Vegas, MGM is the place to be. The headquarters of boxing worldwide, it is where all the big fights are happening. We are very happy to be back here at the MGM Grand with this terrific quadrupleheader supported by some of the sport’s young, rising stars.”

“There is one thing that we know about Floyd Mayweather events – they are massive, and they generate more attention, more publicity and more awareness than any other event in the sport.

“That attention, that visibility, means that Mayweather events attract huge numbers of casual boxing fans, and non-fans, people who may only watch one or two shows a year.

“In short, this is not an event where you skip the undercard. At six o’clock on Saturday night, you have to be in front of your television if you’re at home, or in your seat if you’re in the arena. If you’re not, you’ll be missing the best this sport has to offer.

“In Broner against Molina, we have the very talented Adrien Broner, who has a lot of questions to answer after his setback last December. But Carlos Molina is here to make a statement of his own.

“Khan versus Collazo is the very definition of a high-stakes fight. Collazo is a tough veteran who’s fought the best welterweights in the world during his career. He’s come out on the short end of some very close decisions. Luis is getting the opportunity of a lifetime.

“Amir Khan is fighting for high stakes as well, with the possibility of launching himself onto an even bigger stage as a possible Mayweather opponent.”

Read: Mayweather vs. Maidana: Will May 3 be a monumental moment or just a mirage?
Read: Big Daddy Bunce Ready For Heavyweight Face-OFF At Printworks Between Chisora And Fury
Follow @boxingnews24