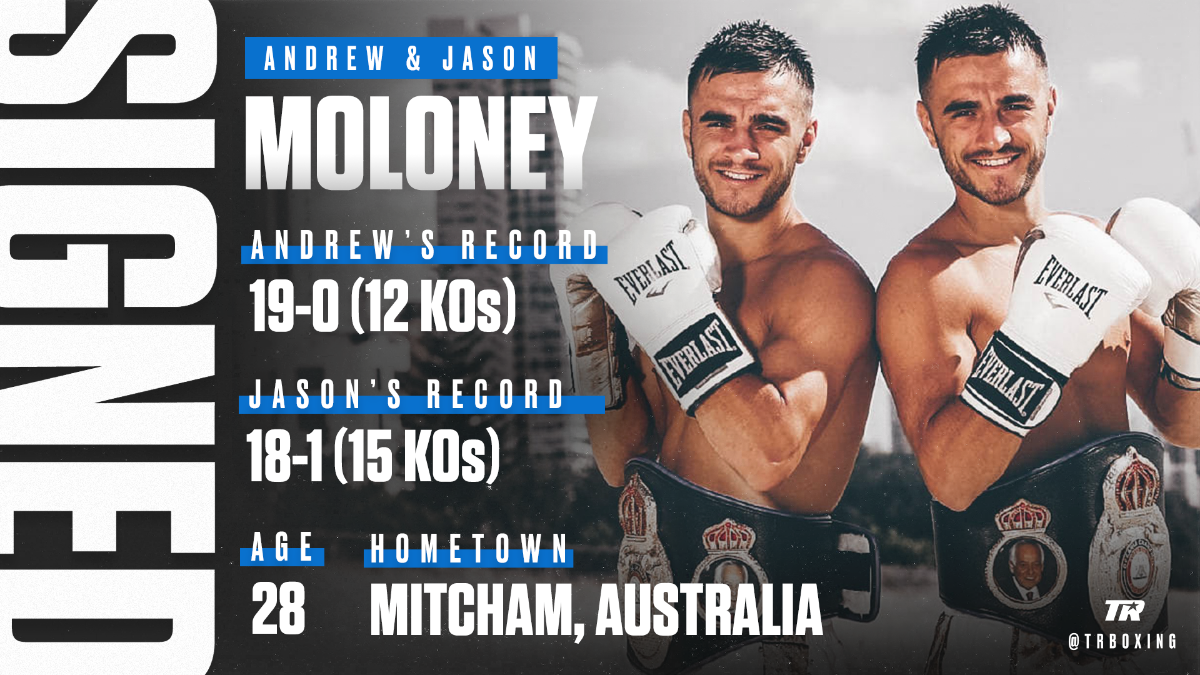 Two Moloneys are better than one. The Moloney twins — undefeated super flyweight contender Andrew and top bantamweight contender Jason — have each signed a multi-year promotional agreement with Top Rank.

The 28-year-old Moloneys, who are scheduled to fight in separate 10-round bouts June 15 in Tweed Heads, New South Wales, Australia, will showcase their talents in the United States and on ESPN platforms in 2019.

“I am personally very thrilled that we have signed the Moloney twins,” said Top Rank chairman Bob Arum. “They are two very talented youngsters who are destined for great things.”

“This is a dream come true to sign with the biggest and best promotional company in world boxing,” said Andrew Moloney. “I am now more motivated than ever. Top Rank has built so many great champions over the years. I will continue working hard every day to make sure I am the next one.”

“With the great team of people I have around me, and now the addition of the best promotional company in the world, I really think the sky is the limit,” Jason Moloney said. “This is the start of something very special.”

“I believe the Moloneys are the future of world boxing,” said Tony Tolj, Jason and Andrew’s manager. “We are excited to join the Top Rank team. This is going to be one hell of a ride for everyone involved.”

Andrew Moloney (19-0, 12 KOs), nicknamed “The Monster,” is on the precipice of a world title shot after less than five years in the paid ranks. Ranked in the top five by three of the four major sanctioning organizations, Andrew Moloney turned heads last September when he stopped former world champion Luis Concepcion in 10 rounds on a card that streamed live in the United States on ESPN+. He won a WBA super flyweight title eliminator March 22 in Chile, knocking out hometown hero Miguel “Aguja” Gonzalez in the eighth round.

Jason Moloney (18-1, 15 KOs) nearly tasted world championship glory, dropping a disputed split decision to IBF bantamweight world champion Emmanuel Rodriguez last October in Orlando, Florida. He rebounded in sterling fashion, knocking out Filipino southpaw Cris Paulino over five dominant rounds on March 30. Jason Moloney is ranked No. 3 in the world by both the WBA and WBC and is angling for another crack at a world title.