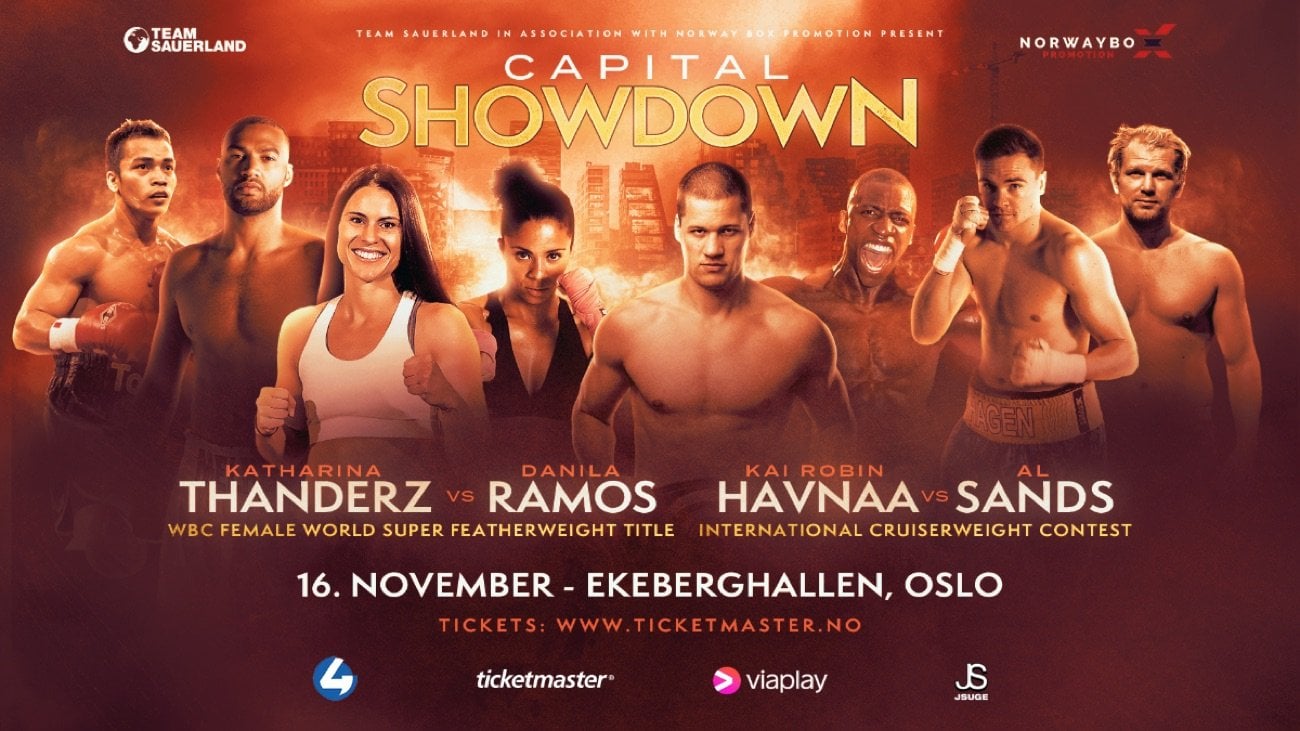 RAMOS: “THANDERZ WILL FEEL THE POWER OF MY FISTS”

Danila Ramos (8-1, 1 KO) is fired up ahead of her hotly anticipated interim WBC Female World Super Featherweight title clash with Katharina Thanderz (12-0, 2 KOs) on Saturday, November 16th at the Ekeberghallen in Oslo.

The Brazilian boxer has hit back at claims from Thanderz’s coach predicting a knockout win, and has warned her opponent to be ‘ready for war’ as she promises to bring home the belt by inflicting the Norwegian’s first defeat.

The former model and mother, who moved to Argentina to pursue her boxing career, also reveals the motivation behind her World title aspirations.

“Her coach is wrong if he thinks she can knock me out,” she says “Does he even know boxing? I’ve had 150 amateur fights against all different types of opponents. I think she needs to change trainer or after the fight he can watch me train then he will see my power and speed. He doesn’t intimidate me.

“She has never fought a real champion like me. I have all the technical skills to win, and I will win. She will find out what it is like to be in a real battle. After this fight, she will have a record of 12-1. There’s no other way for her.

“Thanderz will feel the power of my fists. She wants to take the bread out of my daughter’s mouth and I will not allow it. She should be ready for war. I will come back to Argentina with the belt. I will become World Champion!”

Thanderz Warns Ramos: “It’s Not Going To Be Easy!”

Katharina Thanderz (12-0, 2 KOs) has warned Danila Ramos (8-1, 1 KO) not to expect an easy night when they contest the interim WBC Female World Super Featherweight crown on November 16th at the Ekeberghallen in Oslo.

The former European and WBC International Champion is predicting an ‘intense’ fight, but believes she is ready to claim World honours as she looks to establish herself among the top names in the female 130 lbs division.

“I hope Danila Ramos comes really well prepared because it’s not going to be easy,” said Thanderz. “She is going to meet someone who hits hard and wants to win so she shouldn’t be coming to Oslo for a holiday!

“For me this is a really big opportunity. Winning will be like a dream come true. I’ve been thinking about this opportunity for so many years, and I feel that now is the right time for me to claim my first World title.

“I know Ramos is a tough opponent. I have been watching her quite a lot lately. She has a completely different style to me. She likes to box at a longer distance using her straight punches, and I’m the complete opposite so it’s going to be interesting to see how the fight plays out.

“I think it’s going to be a very intense fight. I plan to start hard from the beginning so I think it will be very entertaining for the people watching.”

Thanderz has been preparing for her title tilt in Alicante under the guidance of coach Jesus Antonio Labrador, and the 31-year-old reveals she is in top shape, and says it could be possible for her to end the fight inside the distance.

“We’ve been training very hard, twice every day, and I feel like I have a lot of energy and motivation, so I’m looking forward to November 16th,” she says.

“I’ve had some really good sparring, which will help bring out the best in me. My conditioning is really good, so I know I’ll be ready to make ten tough rounds, but I also believe I could get a knockout. It’s always more complicated in female boxing because of the shorter rounds, but I know I punch hard, so if the opportunity comes, I will take it. I’m ready to deliver a real battle in Oslo.”

The experienced Argentinian coach believes he has spotted ‘failures’ in Thanderz, and expects the Norwegian fighter to be ‘surprised’ when she meets Ramos as part of a huge night of boxing at the iconic Ekeberghallen venue.

“We’ve had a very intense camp with a lot of commitment,” reveals Martinez. “We are working very hard for this fight. We have one goal and that’s to win the World title. We know that Katharina is a very strong offensive boxer, but we see failures in her too. Our tactical plan will not be revealed until November 16th, but Katharina will be surprised by Danila’s power and skill.

Having missed out on the same WBC strap against French fighter Elhem Mekhaled earlier this year, Ramos gets a second attempt at World glory, and Martinez is convinced that this time ‘A Guerreira’ takes home the belt.

“We’ve had a really great amount of time to prepare for this fight and to plan all the psychological, technical and tactical components. We didn’t have that last time, but Danila still delivered a very high quality performance, and she has become mentally stronger since that fight. She’s a different fighter now and this is her chance to do it. She belongs at the top with the best in the division.”

Thanderz has trained in Alicante, Spain under the tutelage of Labrador since making her professional debut in May 2016, and will once again be counting on her coach’s expertise as she looks to win her first World title.

Labrador, who has overseen Thanderz’s rise from budding amateur to World title challenger, believes she has always possessed the ability to reach the top of the sport, and is backing his fighter to make history at the Ekeberghallen.

“I’ve known from the very first moment that she would become World Champion,” said Labrador. “Katharina is very inspired to fight at home in Oslo, and it will give her added motivation for sure. She wants to show her people that they have someone to get inspired by and feel proud of.

“Everything is going as planned. Katharina has fought ten rounds before and she has fought for titles as well. I won’t speak about our game plan, but we know it will be a very tough fight and Danila is coming to give it her all.”

When asked how the fight will go, the experienced Spanish coach is confident in the outcome, stating: “Kathy will win before the limit. Knockout! I hope I don’t break her when I hug her with all my strength after the fight.”