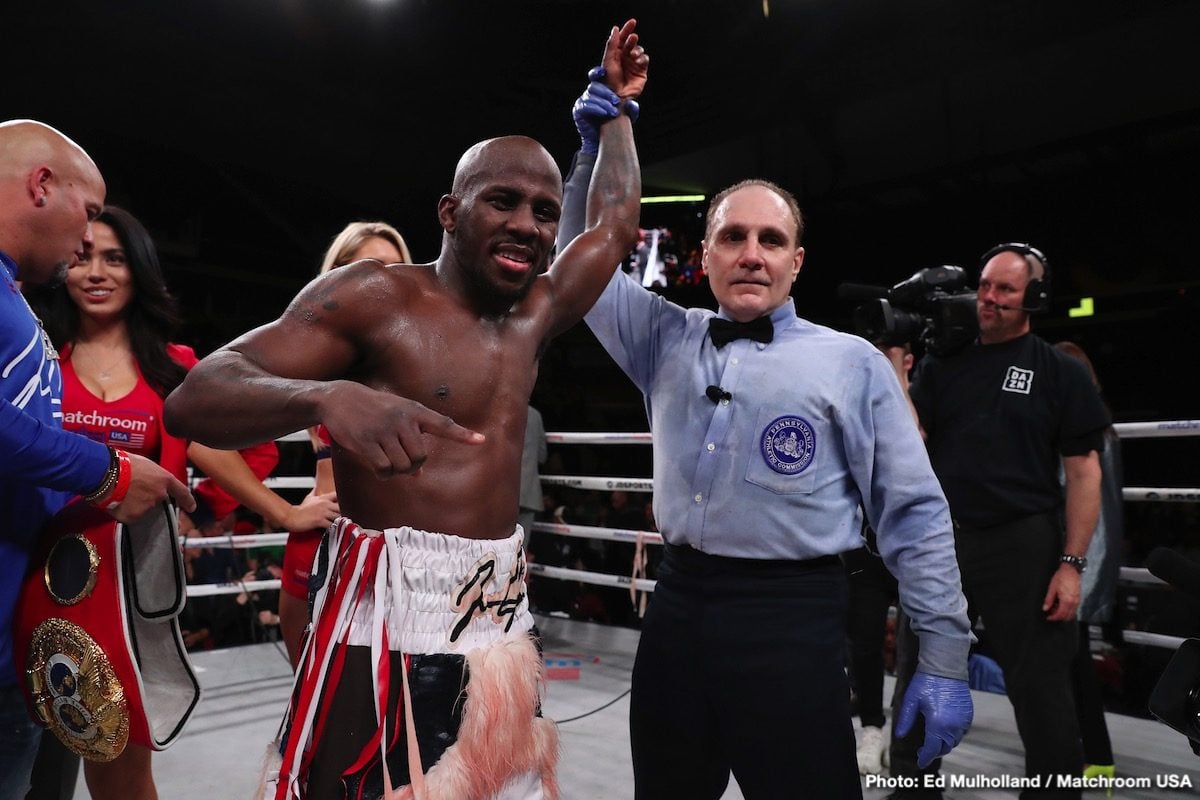 IBF junior lightweight champion Tevin Farmer, won three championship bouts in 2018, and when it came to deciding the “2018 Philly Fighter of the Year” Briscoe Award, Farmer proved to be unbeatable. In fan voting, Tevin led the field of nominees to earn the top honor at the Briscoe Awards, which will be presented on April, 14, 2019, at Xfinity Live! in South Philadelphia.

“It’s an honor, Farmer said about being named the “Philly Fighter of the Year”. “I say it’s an honor because we have a lot of great fighters in Philadelphia. Anybody could have gotten this award, but I got it. That’s big.”

Last August, Farmer defeated Australian Billy Dib by unanimous 12-round decision to win the vacant IBF belt, and then defended it twice before the end of the year. In October, Farmer knocked out Irishman James Tennyson in Boston, for his first title defense, and then decisioned Francisco Fonseca of Costa Rica at New York’s Madison Square Garden to close out his year. Recently he defended his title for a third time in Philadelphia.

The only current world champion from Philadelphia also earned the “Performance of the Year” award for his title-winning effort against Dib. Farmer has won Briscoe Awards on four previous occasions, making these his fifth and sixth Briscoe trophies.

“It means a lot, Farmer said. “And I’m definitely gonna be there.”

Rising lightweight southpaw Jeremy Cuevas went 5-0, with 3 KOs, in 2018, to improve his overall professional record to 11-0, 8 KOs. During the year, he brought plenty of excitement to local boxing fans, and for his hard work was voted as the best prospect of 2018. Cuevas will receive his award at the 12th Annual Briscoe Awards, Sunday, April 14, 2019, at Xfinity Live! in South Philadelphia.

Cuevas distinguished himself from the pack of nominees with more activity (five bouts), terrific punching power, and higher level of opposition.

“It’s a great honor and blessing,” Cuevas said. “I’ve been watching guys win this award since I was an amateur and used to dream about how cool it would be to finally get one. It’s finally my turn.”

In his first fight of 2019, Cuevas suffered his first professional setback (L8 to fellow-nominee Steven Ortiz). However, Cuevas is still one of Philadelphia’s brightest stars and most promising prospects. Fans anxiously await his return to the ring, and expect big things from Cuevas in the future. This is Jeremy’s first Briscoe Award, but likely not his last.

Philly amateur boxer Atif Oberlton has been a top amateur for years. However in 2018, the 20 year old accomplished more than any other young Philly fighter in the amateur ranks. For his multi-tournament victories during the year, Oberlton will receive the Briscoe Award as the “2018 Amateur of the Year” at the Briscoe Awards on Sunday, April 14, 2019, at Xfinity Live! in South Philly.

“It feels great to have been selected by the people of Philadelphia and surrounding areas as Amateur of the Year,” Oberlton said about his award.

2018 was a great year for Oberlton. He won a Gold Medal at the dual competition in Germany, the National Golden Gloves championship, the Eastern National Qualifiers Tournament, and also won a Silver Medal at the USA Nationals, defeating the #1 ranked boxer in the process.

“It feels good to have the hard work, blood, sweat, and tears acknowledged and rewarded,” Oberlton added.

The awards, named after Philly middleweight boxing legend Bennie Briscoe, have been recognizing the best achievements of the Philly boxing scene since 2007.

The Briscoe Awards are presented by Philly Boxing History Inc., a 501c3 Non-Profit organization, dedicated to preserving and honoring the great legacy of boxing in and around the city of Philadelphia. For more information, call John DiSanto at 609-377-6413.