Top super welterweight contender and rising star Tim Tszyu went face-to-face with U.S. Olympian Terrell Gausha at the final press conference Thursday before they meet in the main event live on SHOWTIME this Saturday, March 26 in a Premier Boxing Champions event from The Armory in Minneapolis. 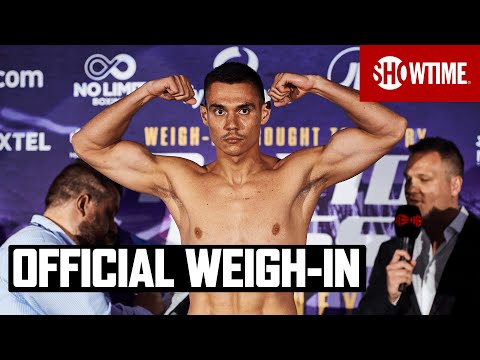 Tickets for the event, which is promoted by TGB Promotions, No Limit Boxing and Warriors Boxing, are on sale now and can be purchased at the Armory at http://ArmoryMN.com/ and through Ticketmaster.

The son of Hall of Famer Kostya Tszyu, Tim Tszyu makes his stateside debut after establishing himself in his native Australia as one of the most dangerous contenders in the stacked 154-pound division. He’ll look to move closer to a world title opportunity with a win over the 2012 U.S. Olympian Gausha, who represents the toughest test of Tszyu’s career and most recently knocked out Jamontay Clark in two rounds on SHOWTIME in March 2021.

Here is what the fighters had to say Thursday from the W Foshay Minneapolis:

“Gausha has the credentials. He’s fought the best in the division. Having to fight someone like that gives me the chance to prove to everyone who I really am.

“Terrell’s name popped up before my last fight and we happily accepted straight away. At this level, there’s no such thing as easy fights. You have to fight anyone and everyone.

“This is a buzz for me. I’m super excited. We’ve done great things in Australia and sold out arenas in one day. But I needed to come over to America because this is what I’ve always watched throughout my life growing up. To finally experience it is incredible. This is what I live for.

“I’m taking it one step at a time, but I’m here to really take over. I believe in what I can do. That’s what’s in my heart and in my destiny.

“I’m going to do what I always do. The game plan is quite simple. I’m going to make as few mistakes as possible and capitalize on his mistakes.

“Everything feels different about this situation but the work is the same and the ring is the same. I’m here to show everything in the ring. Actions speak louder than words.

“This has been a long time in the making. I’m pumped. I’m out of my skin. My father gave me advice about the fight, like what to do and what not to do.

“I don’t know what to expect from fighting in front of a U.S. crowd. At the end of the day, I’m focused on my opponent.

“Me and Terrell are going to produce nonstop action until the final bell rings or before the bell rings. I’m coming with everything. I’ve had a great camp and I’m grateful for this opportunity.”

“I’m just ready. I’m feeling dangerous. I like this fight. Tim is a good fighter who brings the pressure. It’s going to bring the best out of me to face a fighter like that.

“When I watch Tszyu’s fights, I see that he brings the pressure. That’s just what he does. It’s not something I haven’t seen before. I’m going to go out there and do some things that he hasn’t seen before.

“This fight can cement my spot in line for that world title. Tszyu has a lot of backing behind him, he’s young and he’s got a great record. That’s exactly what I want to be up against.

“I feel like I’m just a different kind of opponent than anything he’s ever faced. I’ve trained for a live guy who’s bringing the pressure. But we’ll see how it works out for him on Saturday.

“I just feel like I’m a true super welterweight. I’m not coming up in weight. I feel like I’m strong and I’m not here to be bullied.

“This is a good fight and I’m glad that he took it. I respect Tim for taking a fight like this. We’re going to put on a show for the fans and give them a great fight.

“I prepared great for this fight. We had an injury free camp. I’m in shape and I’m going in there to dominate and deliver action.

“There’s no other way around it. The winner of this fight should get the winner of the Jermell Charlo vs. Brian Castaño rematch.”

“I’m so focused on this fight. I’ve been in camp for four months and flew to Las Vegas to get more sparring with Mario Barrios. So I’m one million percent ready.

“He’s a good fighter with a good record. Everyone knows I have experience fighting guys I know. My last opponent had the same trainer as me. That’s just boxing. Everyone is going to see that this is the fight of the night.

“I feel great heading into this fight and I’m thankful for the opportunity. I’m here to win. Everyone who has watched me knows that I bring a lot of different skills to the ring.

“I want to fight Gervonta Davis. I’m number two for his WBA title and I’m ready for my opportunity. My goal is to face all the champions in the division and be the last man standing.

“Adorno and I support each other when we fight, but it doesn’t matter to me. That’s just boxing. He’s a good guy with a good record and he’s the kind of fighter I want on my record. I have to take advantage of the fights that are presented to me.

“This is a new Joseph Adorno that you’re going to see. I’m not just relying on my power. We’re putting in the work. This takes whoever wins from prospect to contender. I know what’s on the line.

“I just have to be focused and relaxed in the ring. We both bring spectacular power. I think of the three fights on T.V., we’re going to steal the show.

“Whoever lands the first good punch is going to end this fight. Someone is going to sleep.

“I knew about Michel through us talking online. We initially agreed not to fight. Then my promoter said Rivera is telling people I’m scared to fight. So they gave me his contract signed, and I signed mine right away.

“I’m not going to look like I’m scared. Of course this is a great fight. We’re friendly, but it’s just business.”

“The loss that I suffered motivated me to get back in the gym and work even harder. I was able to come back with a big victory in my last fight and show that the hard work was worth it.

“I plan to put on a great performance again against a tough opponent. My hard work is going to pay off and the fans are going to see a great fight come Saturday.

“You can count on seeing me strumming my air guitar on Saturday night. I’m confident in my training and the foundation that I’ve laid in the gym. You’re going to see my hand raised on Saturday night and music for everybody.”

“My defeats are in my past. I learned lessons from them, but I’m focused on the present. I’m ready for this challenge and I’m ready to take things up another level.

“I’m very confident in the weapons that I’ve prepared for this Saturday night. I’ve had a great training camp from start to finish. It’s exactly what I needed heading into this fight.

“I absolutely believe that when I win this fight, I will get a world title shot. I’m glad that Rodriguez is confident, because I’m confident as well. We’re going to provide the fans with a tremendous bout from both of us.” 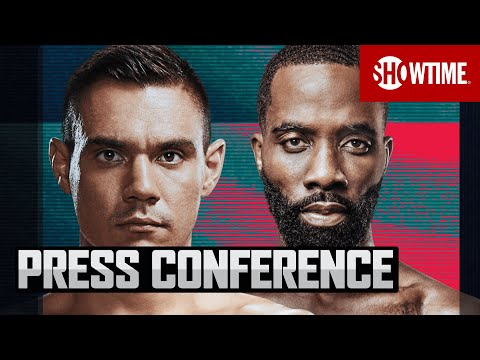 U.S. Olympian and super welterweight contender Terrell Gausha is confident that he’ll be spoiling the stateside debut of unbeaten rising star Tim Tszyu when they square off on Saturday, March 26 live on SHOWTIME® headlining a Premier Boxing Champions event from The Armory in Minneapolis.

“We’ve been working on some different things for this fight,” said Gausha. “We’re going to give Tim Tszyu a different look than he’s seen before. Compared to most of the fights that everyone has seen, they’re going to see something new from me on March 26.”

Tszyu, the son of Hall of Fame fighter Kostya Tszyu, will be making his much-anticipated debut in the U.S. against Gausha, after dominating his first 20 fights in his native Australia. For the Cleveland native Gausha, his motivation comes from within and not from the hype surrounding Tszyu entering this matchup.

“I’m just motivated period,” said Gausha. “It’s got nothing to do with any hype around Tszyu. It has everything to do with where I’m at in my life and my career. Things are happening at the right time for me. I’m in a good place. This is the perfect fight for me at this point in my career.

“I appreciate him for taking this challenge. Most other fighters would try to protect their record. This shows that he believes in himself. He wants the tough fights. That being said, I think he took the wrong fight.”

Gausha scored an impressive knockout over young contender Jamontay Clark in his last fight, stopping his opponent in round two in March 2021, and will look to build on that triumph against a bigger name in Tszyu.

“That was a good fight for me against Clark,” said Gausha. “I wanted to get right back in the ring, but sometimes it’s hard to make fights with certain guys. I have a great opportunity against Tszyu and I’m looking to capitalize and build off of my last performance. I’m going to make an even bigger splash in this fight.”

Training in Los Angeles with Manny Robles and Prenice Brewer, Gausha has received excellent sparring leading up to fight night, having shared the ring with 154-pound champion Brian Castaño, welterweight contender Vergil Ortiz and 2020 U.S. Olympian Delante Johnson. While Gausha expects Tszyu to display his typical come forward style, he plans to be ready for anything that his opponent presents.

“I expect Tim to try to bring pressure and come forward,” said Gausha. “He’s a one-trick pony. What you see is what you get. He doesn’t do too many things spectacularly, but what he does do well, he does it very well, and that’s bring the pressure. We have something ready for that and we’re going to do our thing no matter what he tries to do.”

Gausha previously challenged for the 154-pound world title in losing a 2017 decision against Erislandy Lara and also owns a decision defeat to Erickson Lubin and a draw against former champion Austin Trout. Now, Gausha will look to catapult himself right back into the title picture with a victory on March 26.

“After everyone sees this performance on March 26, they’re going to know where I fit into this division,” said Gausha. “I’ve got a job to do. Right now, I’m really just starting to show people my skills and what I can do. This is going to solidify that. I’m knocking on the door of a title fight right now. A win over Tszyu would be great for my career and get me to the world titles.”

Tickets for the event, which is promoted by TGB Promotions, No Limit Boxing and Warriors Boxing, are on sale now and can be purchased at the Armory at http://ArmoryMN.com/ and through Ticketmaster.