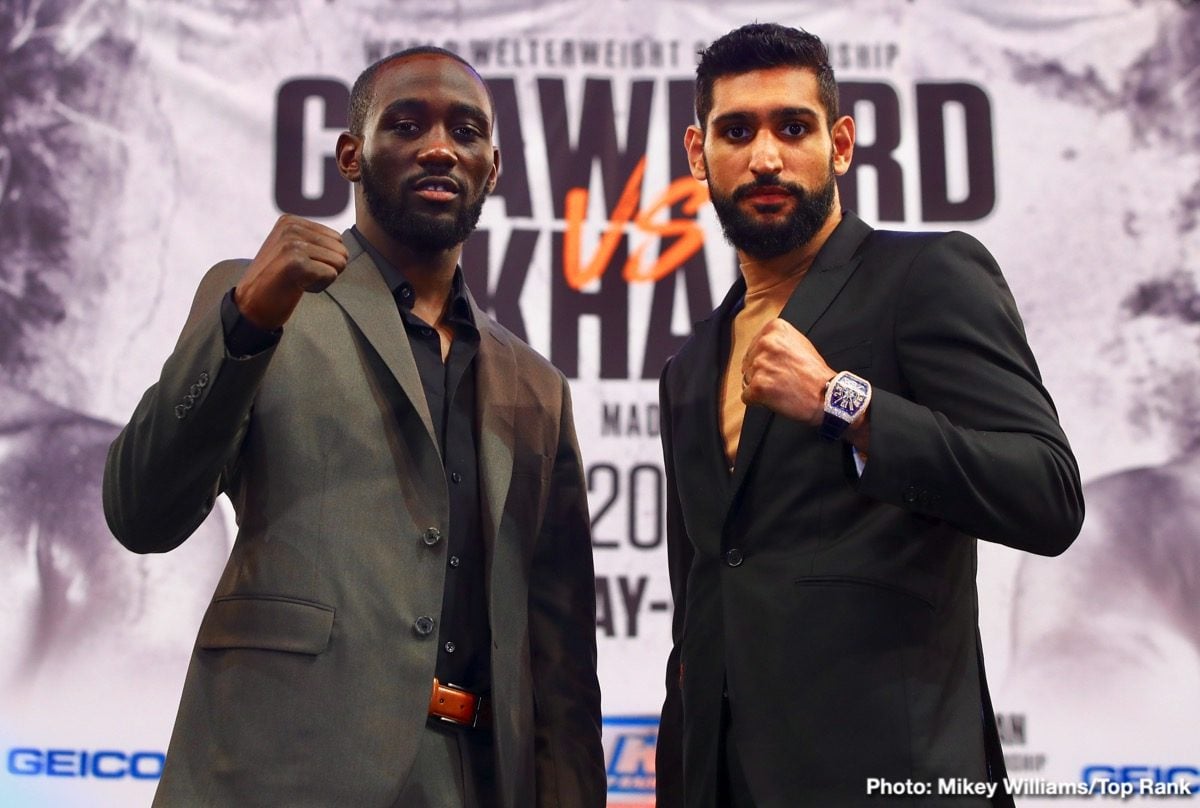 In addition to the star-studded main event, three additional co-features round out Saturday’s Top Rank on ESPN PPV broadcast with marquee appearances by rising stars Teófimo López (12-0, 10 KOs), the lightweight sensation who is ranked in the top five by all four major sanctioning organizations; Shakur Stevenson (10-0, 6 KOs), the 21-year-old featherweight phenom who captured a silver medal for the United States at the 2016 Rio Olympics; and Felix “El Diamante” Verdejo (24-1, 16 KOs), who enters the ring in a 10-round lightweight duel with potential world title implications. Additional undercard bouts will air live on ESPN2 and on the ESPN App (Spanish), beginning at 6 p.m. ET/3 p.m. PT.

ESPN’s official coverage of fight week kicked off Sunday, April 14, with Countdown to Crawford vs Khan, where fans can follow rivalsCrawford and Khan as they prepare for their blockbuster showdown. Go inside Crawford’s training camp as he prepares at altitude in Colorado Springs, shadow boxes underwater and discusses the challenges and stakes on the line with his trainer/chef Brian “Bomac” McIntyre. See Khan training at the University of California,Berkeley, running the hills above the Golden Gate Bridge and working with famed trainer, Virgil Hunter. The show airs across ESPN2 and ESPNEWS several times throughout fight week.

The Prospects (available now) – Follow rising lightweight superstar Teófimo López for 24 hours prior to his biggest win to date against Diego Magdaleno in Frisco, Texas. Lopez and his team allowed all-access coverage leading up to, during and after his crushing knockout win over Magdaleno;

Ring Science (available today) – Undefeated, former pound-for-pound champion Andre Ward breaks down what both Crawford and Khan must accomplish to come out victorious;

Leading up to the event, ESPN will feature previews on studio programming and online, including:

A visit to ESPN’s New York Seaport District Studios Tuesday, April 16, Fighter appearances on SportsCenter, Get Up!, First Take, Max on Boxing and The Stephen A. Smith Show;

Up-to-date on-scene coverage every step of the way from ESPN.com’s Dan Rafael who will be with the fighters multiple days this week;

News updates, a fight breakdown and a complete guide to the fight on ESPN.com and the ESPN app from Rafael out Friday, April 19;

ESPN Fantasy game Streak for the Cash fight predictions for the Co-Main and Main Event during the live telecast Saturday, April 20;

ESPN.com coverage includes a feature on Amir Khan from Mark Kriegel, a betting guide for ESPN+ subscribers and expert predictions. , along with video features on Teofimo Lopez, Khan and Terence Crawford offering a look at what drives each of the fighters. Rafael and Steve Kim will be at the fight offering their unique insight, including round-by-round analysis, as the action goes down.

SportsCenter features on Khan, Crawford and López in English and Spanish throughout the week, including;

Khan’s Return (premiered April 15 on ESPN, April 18 on ESPN Deportes) – Going into the Canelo Álvarez fight in 2016, Amir Khan took a risk his trainer had advised him not take. He was overpowered and knocked out, but he was knocked down in more ways than he could have ever imagined. His life quickly spiraled after one bad decision led to another, his personal life becoming the focus of tabloids and culminating in a tweet that would change his life;

Crawford Squad (April 20, ESPN Deportes) – One of the keys to Terence Crawford’s success has been the continuity of the training squad that has been with him since before he became world champion. Even more important for Crawford is that in addition to working day and night with his team, the friendship that has developed between has made them family;

Teófimo López (April 19 on ESPN, ESPN Deportes) – It’s a simple dream that Teófimo López’ father has, to turn the young prospect into a blend between Floyd Mayweather and Mike Tyson. So far, the lightweight has delivered inside the ring with incredible finishes and display of skills.

ESPN will unveil a series of boxing-style #CrawfordKhan oversized wild postings that will be on display in key locations throughout the New York City.