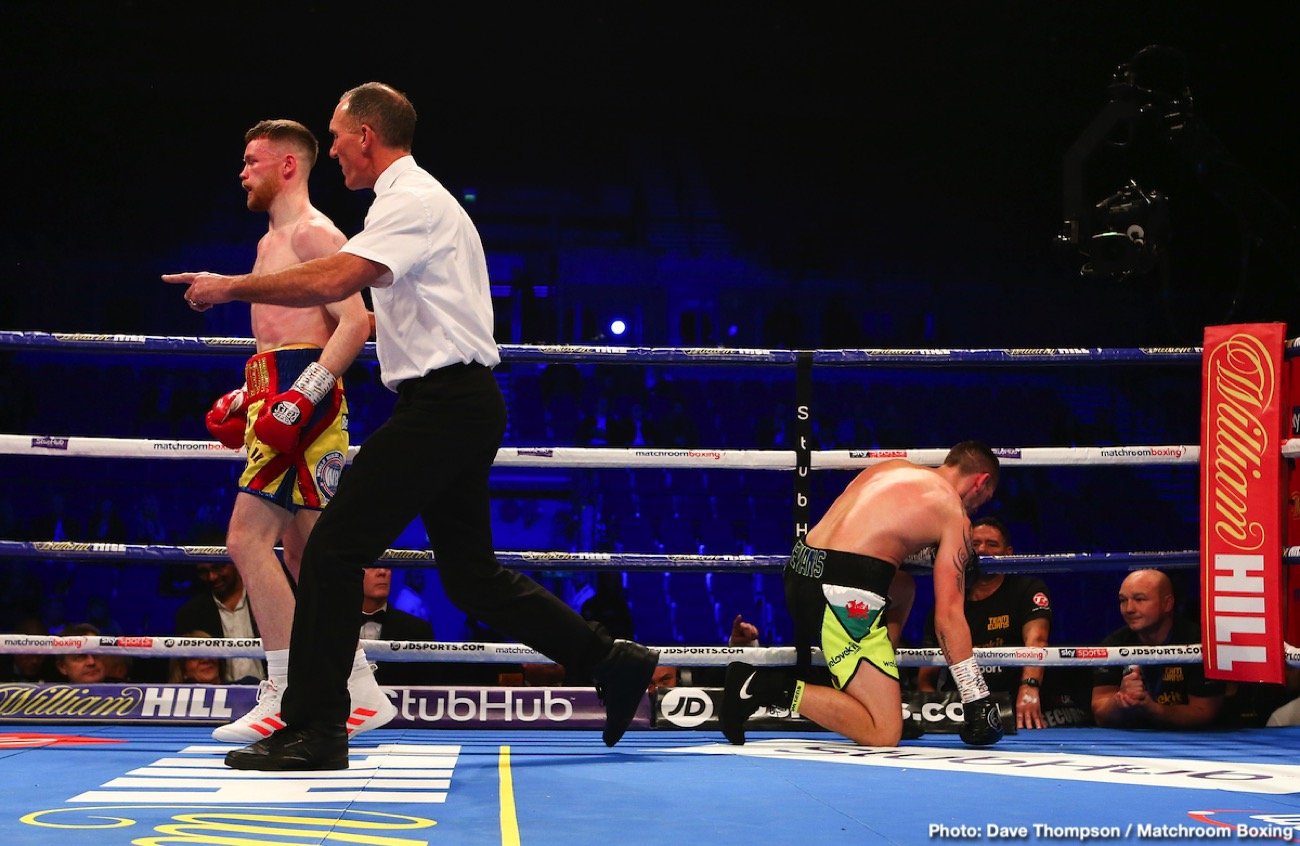 James Tennyson says he is ready to step up to the next level and mix it with the best 135lbs fighters on the planet, and the heavy-handed Belfast banger intends on proving it when he takes on unbeaten Canadian Josh O’Reilly at The SSE Arena, Wembley this Friday, live on Sky Sports and DAZN.

‘The Assassin’ (27-3, 23 KOs) continued his destructive form last time out at Matchroom Fight Camp in August when he claimed the vacant British Lightweight Title with a ruthless sixth round stoppage win over brave but battered Welshman Gavin Gwynne.

A second World Title shot is within touching distance for Tennyson if he defeats O’Reilly in their WBA Lightweight World Title Eliminator, but Tennyson isn’t writing off his opponent, acknowledging that he has a strong track record and plenty to fight for.

“This is a big step forward, a World Title Eliminator,” said Tennyson. “It can open some doors and opportunities for me. I know I can mix it with those guys. I want the opportunities with the big names.

“I haven’t watched too much of O’Reilly. Tony (Dunlop) is happy with how training is going. We’re very confident of getting the win on Friday. He’s ranked above me. It’s a must win. It’s just about winning, whether or not it looks good.

“He’s 16 and 0, and holds two Titles, the IBA Intercontinental Lightweight Title and NABA Lightweight Title. He’s very confident and clearly he’s here to win. It’s his big opportunity, it’s not one I can take lightly with the rewards at the end of it.

“I’m very highly motivated. I haven’t stopped thinking about a World Title. Fighting at that level is where I want to be. I’m working very hard to get myself into that position again. It’s a stage of boxing I’ve wanted to get back at. I want to bring big fights back to Belfast. It’s a dream. It’s one I’m getting closer to.”

O’REILLY: I’VE GOT TO BE SHARP AND SWITCHED ON

Undefeated Canadian plans to ‘mix it up’ against Tennyson

Josh O’Reilly believes he has what it takes to stop James Tennyson’s destructive run of form as the Lightweights prepare to collide in an Eliminator for the WBA Lightweight World Title at The SSE Arena, Wembley on Friday, shown live on Sky Sports and DAZN.

O’Reilly (16-0, 6 KOs) is undefeated in 16 fights since turning professional in July 2014, and the 29-year-old Canadian holds the North American Boxing Association Lightweight Title and a top ten ranking with the WBA.

Having looked into Tennyson’s previous fights, O’Reilly knows he cannot afford to come into the ring with anything less than top form, and the Ontario man is confident of taking a step closer to a dream World Title shot of his own tomorrow evening.

“I’m super excited,” said O’Reilly. “I’ve never been on a stage like this. It’s awesome to get this opportunity. I’m happy to be sharing the ring with James, I think it’s going to be a great fight and I’m looking forward to it.

“He really likes guys to sit in front of him, so you’ve got to keep him off balance, lots of lateral movement. Some do well but expend a lot of energy and he catches up with them. You have to mix it up, lateral movement and space.

“I’ve got the be sharp and switched on. The plan is to not get caught up in anything crazy early and pick my shots to slow him down. There’s things you see, there’s a lot I can take away from all his fights. There’s a lot of things from the outside that might seem different when I’m in there.

“I’m a fan, I like watching the kid. I’ve seen him enough and I think there’s a lot of stuff I can do in there to negate a lot of the stuff he does. I’ve got my own plan on what’s going to happen, it’s just about executing it. I’ve watched him for a while. I’ve paid attention to him, seen some of his older fights.

“He’s a strong kid, I might be a bigger guy than him but he’s got the power. We’ve both got to make 135. Back home, there’s stuff to do like sell tickets, so it’s less stressful here. You can focus on the fight and do your training, focus on making the weight. I feel quite comfortable, it’s the easiest I’ve made weight for some time.”

Zach Parker says he’ll deliver “what the fans want to see” when he takes on Cesar Nunez for the WBO International Super-Middleweight Title this evening at The SSE Arena, Wembley, live on Sky Sports and DAZN.

Following a stunning 11th round knockout win over Rohan Murdock in his last fight, Derby’s Parker (19-0, 13 KOs) is promising to produce another show-stopping finish as he looks to capture the attention of the 168lbs World Champions.

“The fans watch boxing because they want to see knockouts, and I deliver knockouts” said Parker, who weighed in at 167lbs at the official weigh-in yesterday.

“In 2021 I’m looking at World Title shots, I’ve already said I’m after Billy Joe Saunders as he has the belt, but any of the World Champions in this division I’m looking at.

“I know I have a job to do here, and Nunez is an experienced fighter who has got a big chance to show what he can do. I can’t look past him, and I’m not, but World Title talk motivates me. I can’t let him get in my way of becoming the best”.

Parker’s promoter Nisse Sauerland says he can’t wait to see his charge in action again, describing the 26-year-old as a “knockout artist”.

“He knocks people out, he’s unbelievable at it. He has this ability to end a fight, a perfect combination of speed, timing and power.

“The future is really bright for Zach, but he’ll have to go to work tonight. He’s capable of stopping Nunez, but Nunez won’t make it easy for him.

“He gets this job done, then we start having the exciting conversations about 2021, he’ll be Mandatory and we’ll make that fight happen.”