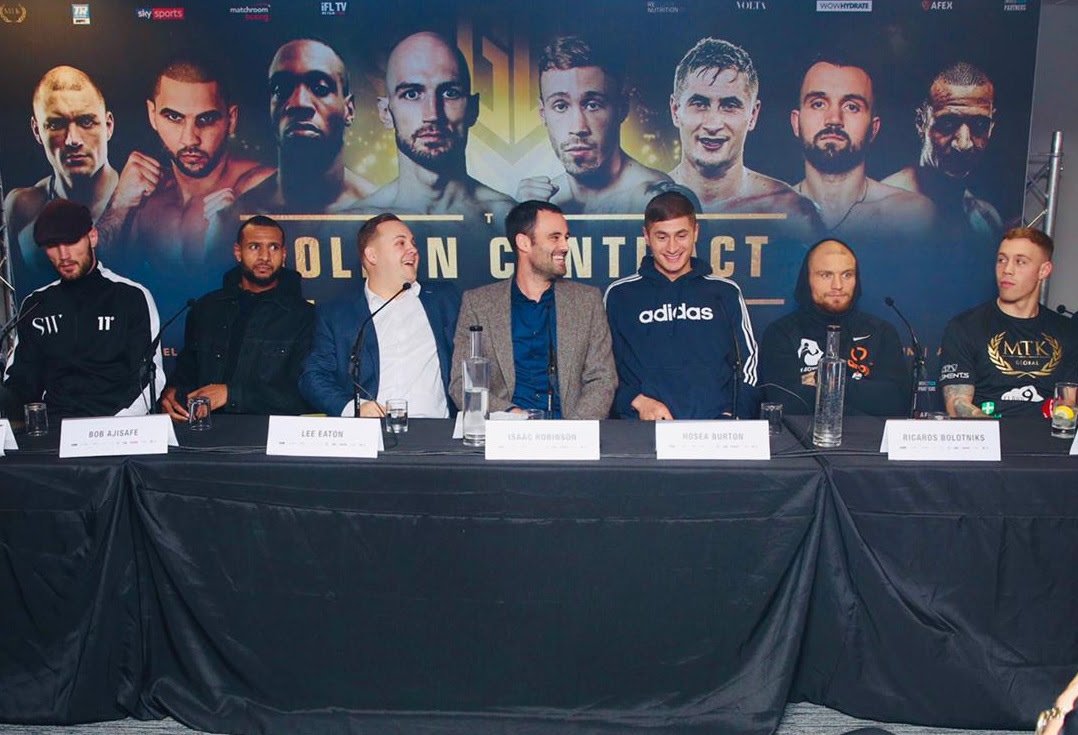 Some of the fighters made it perfectly clear their opponents have made mistakes by choosing them as they took part in the final press conference today ahead of the #GoldenContract light-heavyweight quarter-finals.

The groundbreaking competition returns on Saturday as eight of the best light-heavyweight stars from around the world compete at the Brentwood Centre, live on Sky Sports in association with Matchroom Boxing and on ESPN+ in association with Top Rank.

It meant that the draw has seen Philbin pitted with Michel, Ward going up against Bolotniks, Sterling taking on Conroy and Ajisafe facing off with Burton.

Hosea Burton said: “It’s a good opportunity to get back in there and get back in the mix. Me and Bob are both awkward and we’re in the who needs them club. That’s why we’ve been inactive for a few years because everyone knows we’re hard to beat.

“It’s a shame that we got drawn against each other, but I’m up to the task and I think I’m the best boxer in the tournament.

“I know Bob will be fit, but I do plan on putting the hammer on him. I’ve been wanting this fight for a long time, and when he was British and Commonwealth champion it nearly happened but for one reason or another it didn’t. We get that chance now.”

Bob Ajisafe said: “I’m planning on putting a good performance on and getting the job done. I didn’t expect to get Hosea in the first round, but I’ve obviously known about him for a while.

“He’s been around the same time as when I was champion so he’s obviously a good fighter, but everyone here is a good fighter and here on merit. Styles make fights, and I’m confident in my own ability.”

Andre Sterling said: “My trainer told me about this opportunity and I was up for it. I looked at the fighters that were in it and I thought this was a fantastic chance to win it and get some exposure.

“I don’t really have a reason why I picked Liam Conroy, it’s nothing personal and I’m not scared to fight anybody. I’m fit and ready to go.”

Liam Conroy said: “I seem to be the underdog with the bookies, but I wouldn’t have it any other way. I’ve had a look at Sterling and stylistically I think it will gel and make for a good scrap, so I’m looking forward to it.

“I’m thankful to MTK Global for putting me in here and I’m looking forward to showcasing my skills again.”

Steven Ward said: “Going into the tournament there were no fighters I was gunning for. I’m happy with who I got.

“I had another look at my opponent last night so that was good to have an idea of what to expect, but the main thing comes from my team around me and we’re all confident.”

Ricards Bolotniks said: “Everyone who is here is tough and they’re all good boxers. I want to fight with everyone in this tournament and I am happy to fight Steven Ward.

“I saw his fight with Liam Conroy and I thought Liam won that fight. They have made a mistake by picking me, and I want to show them they’re not correct.”

Tommy Philbin said: “I was asked if I wanted to enter this tournament a few weeks ago. I spoke to my trainer and we waited for the call, and then I jumped at the chance.

“I had a few people in mind to pick, but in the last week or so I’ve been looking at Serge Michel and I think I have the beating of him.”

Serge Michel said: “I don’t see it as an insult being picked. When you played football as a kid, the first who got picked is the best!

“I didn’t want to pick anyway, I wanted a red ball. I need to beat everyone, so if you have doubts in your talents then it is the wrong tournament to be in.”