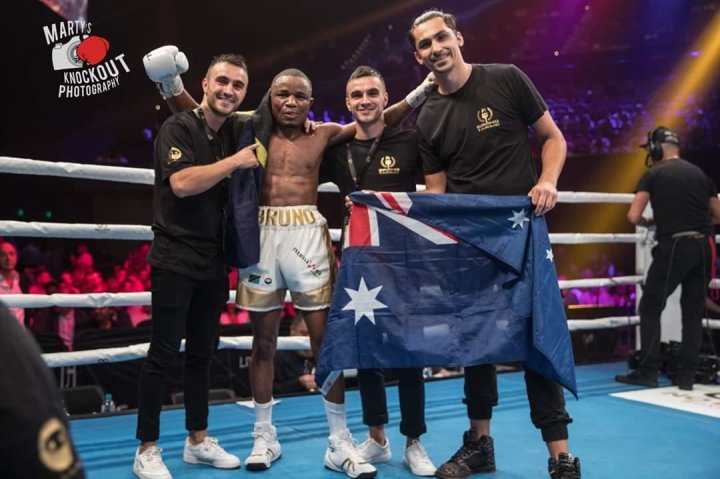 Aleem won via knocking out Vic Pasillas in 11 rounds during a masterful performance at the Mohegan Sun Casino, in Uncasville, Connecticut, this Saturday night.

Stephen Fulton was also victorious with decision victory over Angelo Leo to win a 122-pound title. Very impressive performance from the New Champion.

“Aleem you had a very good fight, Congratulations on your victory but make no mistake I’m ready for this fight, I’m ready to become World Champion.

Fulton and Leo was an excellent fight, I have respect for every champion, I train every day with Jason and Andrew Moloney we are the future of the Super Flyweight, Bantamweight and Super Bantamweight divison.

My manager (Tony Tolj) already start contacting Tom Brown for a fight with the Champions. I come from nothing, my whole life I have nothing, I know this is part of God plan. My lord and saviour make me hungry give me eye of the tiger and I’m coming for every champion Aleem, Stephen Fulton, Nery, Brandon Figueroa, Murodjam Akhmadaliev. Remember the Terminator will never stop until I’m thr world champion.”

Undefeated super bantamweight Ra’eese Aleem 17-0 (11) takes on southpaw Vic Pasillas 16-0 (9) the 12-round clash is set for the interim WBA title at the Mohegan Sun Casino in Uncasville, Connecticut on January 23.

The fight will be featured on the undercard of the WBO super bantamweight title defence of Angelo Leo 20-0 (9) against Stephen Fulton 18-0 (8).

“I fight anyone, anywhere, anytime, I leave it all up to manager Tony Tolj works very hard, I’m convinced he’s a vampire because he never sleeps.

Ra’eese Aleem is an excellent fighter, I believe he will win the WBA interim title and make alot of noise in the Super Bantamweight division, but I want the best and I issue the challenge to him, I’m WBA #13 and soon will be World Champion, I know this, I believe this and I thank God for all the opportunities to give me and my family a better life and I will make my proud.

Angelo Leo and Stephen Fulton is another excellent match, it should have happened but covid always makes problem. I think Leo the WBO champion is in for a very tough fight, I don’t want to pick a winner, I want the winner.

Give me any world champion from super featherweight to super bantamweight. Diaz, Herring, Alvarado, Navarette, Warrington, Russell, Xu Can, Angelo Leo, Nery,Figueroa, Akhmadaliev I am ready for everyone. I want to thank the IBF, WBA, for all their opportunities, this help my family for give them better life”

Tarimo’s Manager gave his take – “Bruno looked sensational in his recent fight and is getting better everyday. Bruno is as old school as you get. He will literally will fight anyone, anywhere, anytime.

“Bruno is going to drop in weight classes and campaign at super bantamweight. There is a reason he is called the Terminator, he does not stop till he terminates the opposition. We have seen Bruno defeat world rated and Olympic boxers since coming to Australia, Dib, English, Brunker, Gurdijeljac, May, Fleming. One thing is for certain, once Bruno gets his opportunity for a world championship its going to Hasta La Vista Baby for his opponents!”