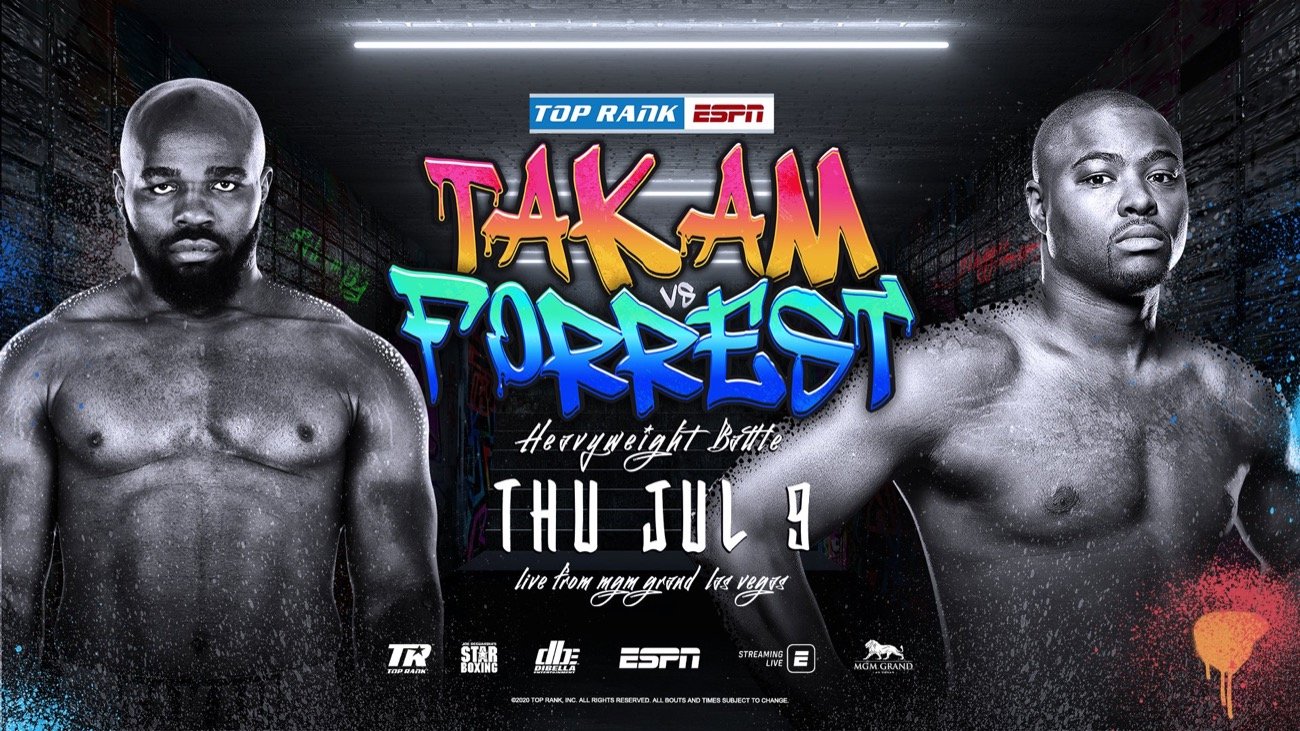 Takam has been at, or near, the top of the heavyweight hierarchy for the past decade. He is a former world title challenger who has won three fights in a row and is seeking another championship opportunity at the age of 39.

A 2004 Olympian for his native Cameroon, Takam, who is co-promoted by Joe DeGuardia’s Star Boxing, has wins over former world title challengers Michael Grant and Tony Thompson.

Forrest has suffered only one defeat since 2014, a controversial split decision against Jermaine Franklin last July. The winner of this main event will take a seismic step forward in the heavyweight landscape.

“For the past two weeks, I didn’t think I was fighting since my fight with Oscar Rivas fell through, but I stayed ready,” Takam said. “I want to give a great fight to everyone watching on ESPN.”

DeGuardia stated, “I am thrilled the ESPN audience will be able to see Carlos Takam on July 9. Takam-Forrest is a significant fight in a hot heavyweight division. Carlos is a true pro, and he didn’t let the Oscar Rivas pull-out affect him. He stayed ready and now can jump in on less than two weeks’ notice to capitalize on this opportunity. This will be his third fight in less than a year, and kudos to him as he is a fighter who wants to stay active.”

“I respect Carlos Takam as a man, but I will have to hurt him and do what I have to do to win,” Forrest said. “This is an amazing opportunity for me to fight on ESPN. I feel I’ve earned it, and I’m more than ready. The change in opponent was of no huge concern. Though Takam has been more active and is in better shape, he and Jarrell Miller have a similar style, so I didn’t have to change much in training camp.”

Castro, from Phoenix, Arizona, is 5-0 since signing a co-promotional deal with Top Rank, rising the rankings with a classic boxer-puncher style. He dominated former world title challenger Genesis Servania over 10 rounds in February 2019 and is coming off a tight majority decision verdict over longtime contender Jesus Ruiz.

Juarez is synonymous with toe-to-toe battles and is perhaps best known for his 2015 Fight of the Year contender against Nonito Donaire, which he lost by unanimous decision. Juarez is 8-4 since the Donaire fight, including a knockout win over Albert Pagara (26-0 at the time).

Heavyweight sensation Jared “The Real Big Baby” Anderson (4-0, 4 KOs), who notched a KO win inside “The Bubble” on June 9, will return in a six-rounder against an opponent to be named.

In a four-rounder at welterweight, Peter Cortez (2-1, 1 KO) will take on an opponent to be named.