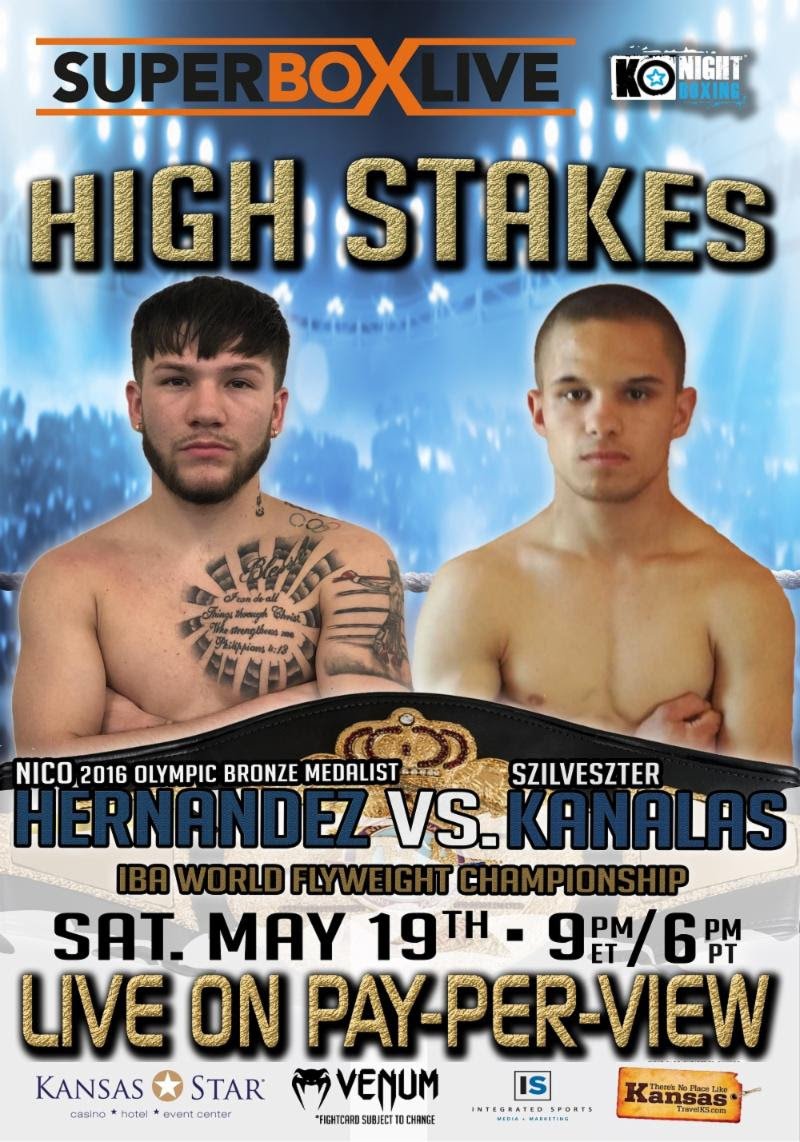 Integrated Sports Media will distribute “SUPERBOX LIVE: High Stakes” in the United States on cable, satellite and digital pay-per-view via iN Demand, Vubiquity, DIRECTV, DISH and live-streamed worldwide on FITE.TV app and website (excluding Canada) for a suggested retail price of only $19.95.

In the first world championship boxing match ever held in the state of Kansas, Kanalas challenges 22-year-old Hernandez, the reigning IBA Americas champion, in the 12-round main event.

Fighting hometown hero Hernandez in his backyard, where the Wichita fighter made his pro debut last year, apparently doesn’t faze the 19-year-old Kanalas. “I think it’ll be fantastic fighting him in the arena,” Kanalas said. “It will be a good atmosphere for me and Nico. We will both be giving our all.

“Nico seems like a good guy, but I don’t want to be friendly with him before the fought, or in the ring. Maybe after the fight. We won’t talk in the ring, only fight. Nobody knows before a fight what will happen in the ring. Everybody has a plan, of course, and I do as well. I’m not going to talk about my plan to win the fight, but I can tell you Nico will not love my plan.”

“I was very happy when I won my first title,” Kanalas remembered. “I thought the world was mine, but life isn’t easy. I had some private life problems and I didn’t prepare enough for my second title fight opportunity for the IBF Youth World title fight in Indonesia. The fight started good for me with two judges giving me the first round, but I got tired and lost in the third round. I’m very happy that I have this title fight and will try to take advantage of this great opportunity.

“I’m very happy that fans back home will be able to watch the fight live. I will not feel alone. I want to show my family and friends that I can do big things in the ring.”

Another heavyweight also fighting on the televised segment of the show is undefeated Ukrainian heavyweight prospect Oleksandr Teslenko (12-0, 10 KOs), fighting out of Toronto, against an opponent to be determined.

To watch “SUPERBOX LIVE: High Stakes” live in Canada, showcasing undefeated Canadian heavyweight Teslenko, in addition to more exciting boxing to come in 2018, fight fans can contact their local cable provider to subscribe to Super Channel and all that it offers, including premium series, movies and much more, for as low as $9.95 per month.

Venum (www.venum.com) has been named the official gloves and apparel of SUPERBOX LIVE