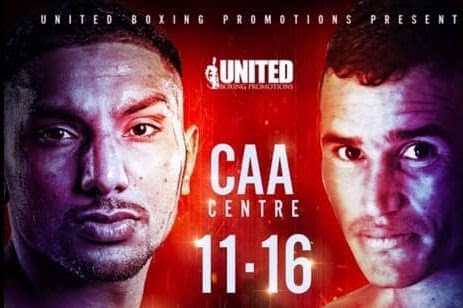 Santana seeks redemption on November 16, having lost to Chakria stablemate and world title challenger Brandon Cook (20-2-0, 11KOs) in his most recent championship appearance. Santana has been on the brink of winning a regional title for years and hopes that moving up to middleweight makes all the difference this time around.

“I know I’m ready for ten rounds and a fighter like Santana,” explained Chakria. “Coach Ryan Grant and I are working day-in, day-out to make sure I’m ready for anything on November 16. It’s all about growing as a boxer. Santana is a tough veteran and will bring the fight. It’s a good test for me and should make for an exciting contest for the fans.”

The Chakria-Santana contest is sanctioned by the IBA, which has overseen world title matches featuring some of Canada’s best. The IBA can count Arturo Gatti and Eleider Alvarez among their pantheon of world titlists, right alongside the likes of George Foreman, José Luis Castillo, Erik Morales, and Roy Jones Jr.

“I’m confident that Chakria is ready,” said Tyler Buxton of United Boxing Promotions. “He takes his boxing career very seriously. I can honestly say he improves on each and every performance. Mark my words, he’ll fill the Scotiabank Arena one day. He’s that special. That being said, he needs to take care of business later this month and look good against Santana.”

Chakria-Santana is one of four big ten rounders slated for November 16, including Hamilton’s Josh O’Reilly (15-0-0, 5KOs) defending his NABA lightweight title against Mohammed Abedeen (10-1-1, 3KOs) of Brampton; Canadian light heavyweight champion Ryan Young (13-4-0, 10KOs) of Oakville against Genaro Ortiz (10-6-2, 6KOs) of Mexico; and the much anticipated return of world title challenger Brandon Cook (20-2-0, 13KOs) of Ajax against an opponent TBA.

Tickets are on sale now at the CAA Centre box office and online via www.ticketmaster.ca