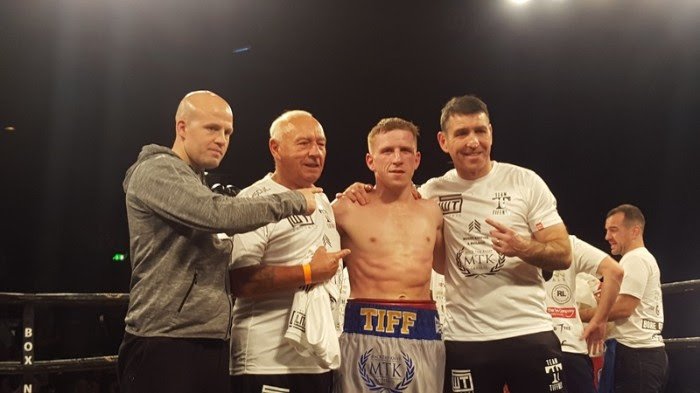 Stephen Tiffney believes he will have an edge over Edinburgh rival Lewis Paulin in their Scottish featherweight title clash this weekend.

Undefeated Tiffney (8-0) and Paulin (10-0) top a ‘Christmas Cracker’ fight card at the Lagoon Centre in Paisley on Saturday night, with the former amateur foes set to renew hostilities for domestic honours at professional level.

The pair will do battle in a scheduled 10-rounder for the vacant Scottish title a little under five years on from Tiffney’s 20-11 points victory over Paulin in the 2013 national amateur championships.

“It puts a bit more on the line because we know a lot about each other and two local lads going at it makes it a bit more exciting,” said Tiffney on clashing with his old sparring partner.

“We’ve trained and sparred quite a lot together in the past and we fought in the amateurs a few years ago in the national championships as well, so we know each other really well.

“I won that fight and you could say I have a bit of an edge over him with that. We’re friendly, but it’s just the way it goes – we both knew this fight was going to happen at some point. So we’ll put it all aside for the fight and we’ll be fine afterwards,” added the MTK Global-backed 29-year-old, who trains out of Edinburgh’s Lochend Gym under coach Terry McCormack.

Tiffney only opted to turn pro two years ago following his 2015 national lightweight title success, but the Newtongrange-based featherweight is already aiming to claim his first pro title.

“I was amateur for a long time,” said Tiffney. “I won Scottish titles and fought for Scotland, but I didn’t turn pro until I was 27.

“That was a bit later than usual, but it was always on the cards. I’m keen to move faster now because of that, I feel I’m ready to be pushed on a bit. I’m 29 now and the last couple of fights I’ve had have put me in the right direction.”

Tiffney and Paulin’s Scottish-title fight tops a busy night of action in Paisley this weekend when nine bouts take place on the MTK Global-backed fight bill, with a limited amount of tickets available at the door.