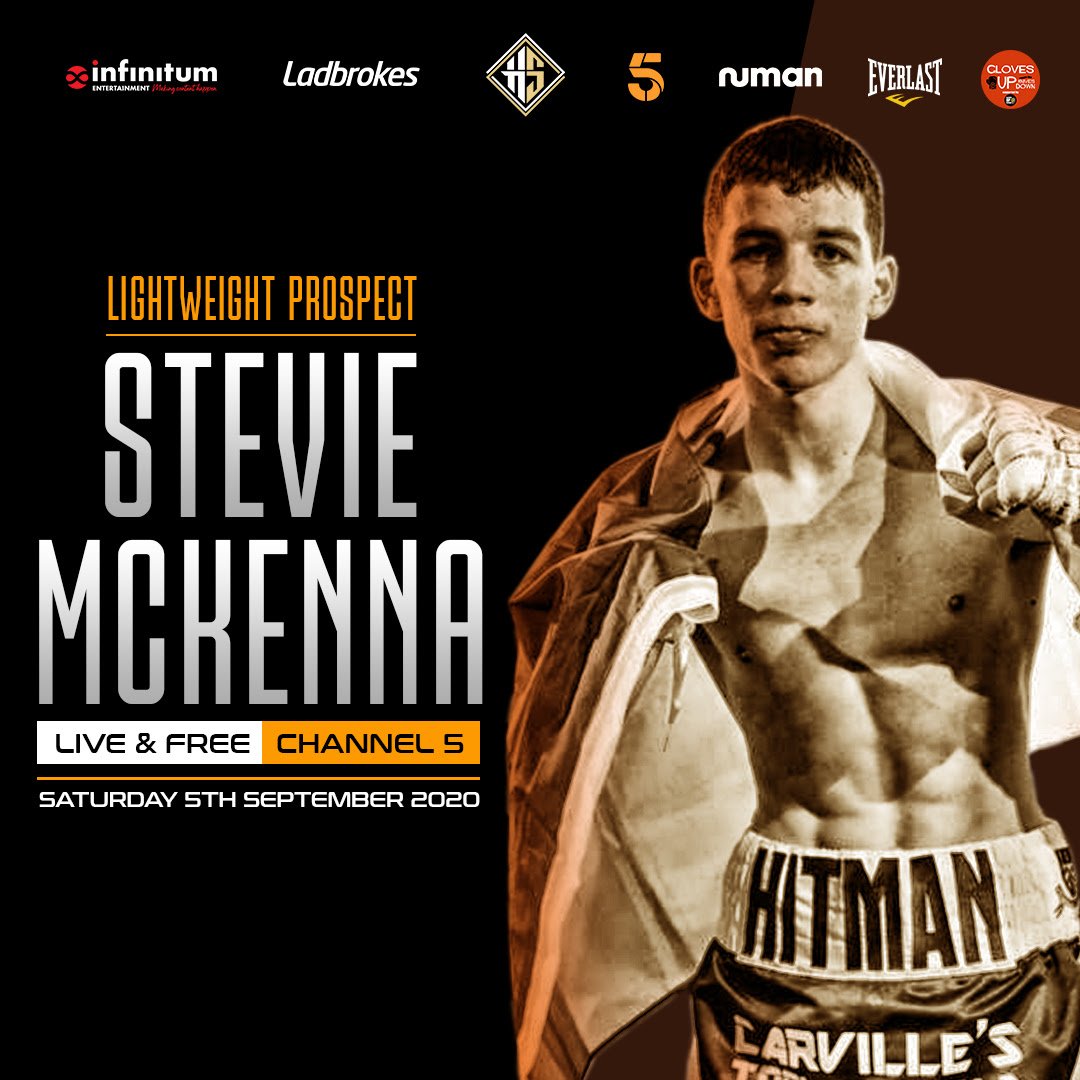 Promoter Mick Hennessy is thrilled to announce that one of the emerging young stars of World boxing, Stephen ‘Hitman’ McKenna, will make his UK debut on his 5th September show, live on free-to-air Channel 5.

Red-hot Irish talent McKenna will feature on the undercard of Alex Dilmaghani’s European Super-Featherweight title challenge against champion Samir Ziani, courtesy of his management team Sheer Sports. His opponent will be Gateshead’s Kris Pilkington in a six round contest.

The hard-hitting 24-year-old super-lightweight prospect is certainly living up to his Hitman moniker. Undefeated in four fights since turning professional last year, McKenna has won them all by KO inside two rounds, three coming in the first.

From Monaghan in Ireland, McKenna comes from a very strong boxing family of brothers alongside Gary and Aaron who all represented Ireland at International level winning medals. Now based in Woodhills, California, he is trained by the legendary Freddie Roach at the Wild Card Gym.

McKenna was a standout amateur produced by the Irish Boxing Association with a career record of 155 fights and only 24 losses. Astonishingly, he won the Irish U/18 youth title, Multi Nation Bronze in Russia, Commonwealth Youth Gold in Samoa, European youth silver in Poland and was crowned Irish Elite Senior Champion all in the same year.

Prior to moving to Los Angeles in 2018, McKenna had been training with the Irish Elite team full time at the High Performance center in Dublin for three years.

McKenna is excited to fight in the UK for the first time as a professional. He said, “The Hitman is ready! I’m looking forward to making my first appearance in the UK with Hennessy Sports. I’m in really good shape and ready to put on an exciting show. I’m delighted to be fighting on free TV in the UK on Channel 5. It’s a fantastic opportunity for my friends, family and fans to finally see me in action. This is just the platform I need to build my stock. I can’t wait.”

Sheer Sports V.P Lyle Green, said: “Stevie McKenna is the best, most exciting up and coming fighter in boxing. Thank you to Mick Hennessy for giving Stevie a chance to showcase his world class talent in front of the entire UK and Ireland on September 5th live on Channel 5. He will not disappoint.”

Hennessy added, “This is a real honour to have this talented young man feature on my September 5th event. I’d like to thank Sheer Sports for allowing Stevie to fight on the card and I’m sure he will go down a storm with fans and viewers here. I’ve been well aware of Stephen’s quality and credentials for many years due to my close links with the Irish boxing scene and also knowing his family. He is one of the most exciting boxers to emerge from Ireland in recent years. I’m absolutely thrilled he’s going to fight on my show and what a night it will be with Alex challenging for the European title, Isaac continuing his momentum in the cruiserweight division, the Southern Area Super-Flyweight Championship between Ricky Little and Sammy Cantwell, plus my son Michael will fight Jamie Stewart, and Idris Virgo returns after his stunning one punch body knockout last Saturday night.”