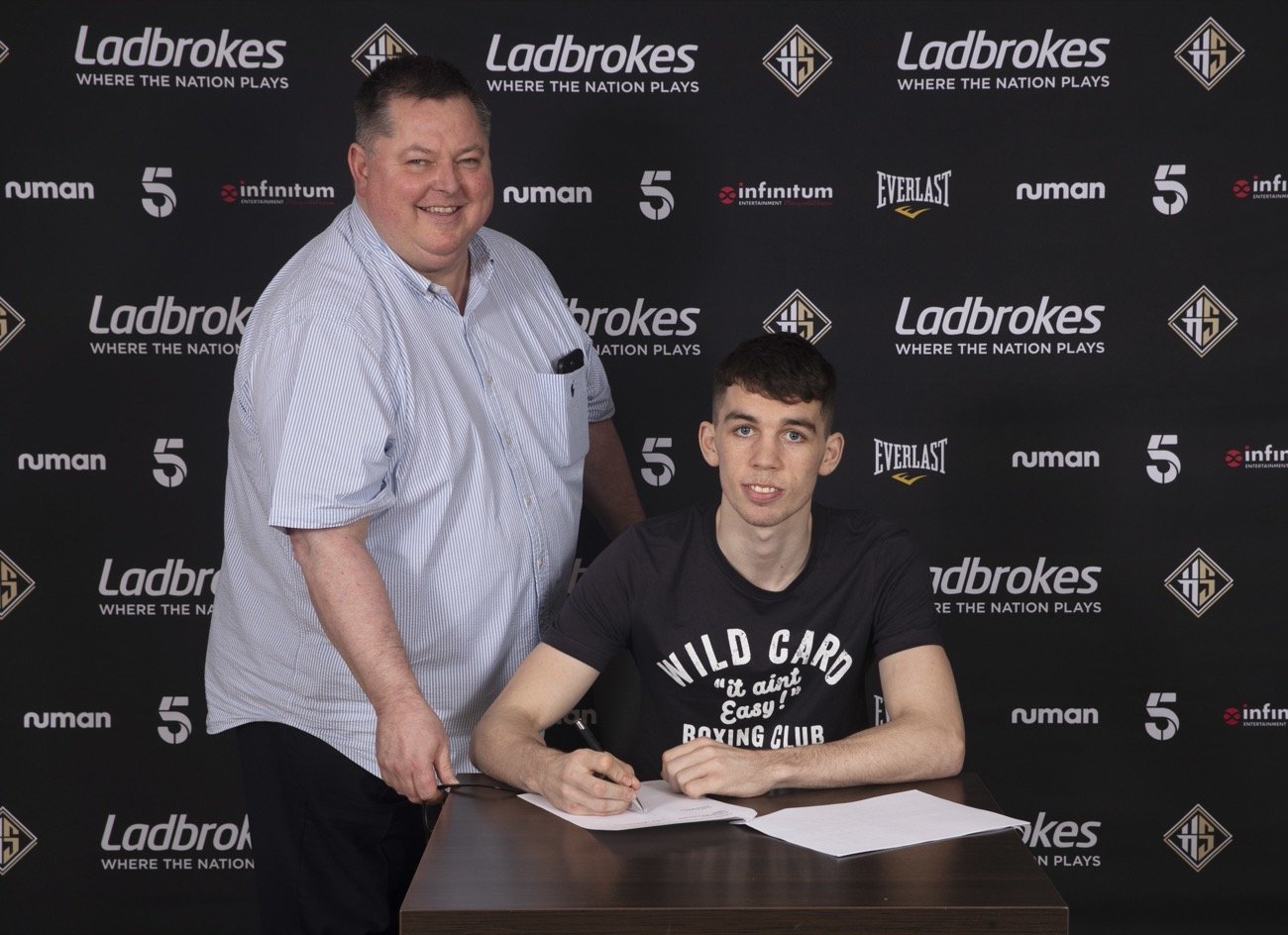 Towering at 6ft 1in and undefeated in eight fights all by KO, Irish welterweight Hitman Stevie McKenna has warned rival Conor Benn that he’ll be too big and strong for the “wee” Brit if and when they fight.

Speaking to Ali Drew for an exclusive interview on Hennessy Sports’ YouTube Channel, McKenna says that he’d be major threat to Benn who knows that the County Monaghan terror is too powerful and does not fancy the fight as he would lose his title, record and pride if he lost.

Unbeaten McKenna has caused a stir since his pro debut in the super-lightweight division with eight stunning stoppages, five have been wiped out in the opening round and only one has made it into the fifth, but now that the 24-year-old has moved up to the 147-pound ranks, he believes he will be an even more devastating force.

“He knows, he knows I’m too big too and strong for him. I’d have no problem taking Conor Benn out of there. I’d fight him in the morning. Conor Benn’s really only a wee small super-lightweight. He’s not a 147, he’s very small, I’m too strong and big for him,”

“The 147 is a strong division at the moment and in the next two years I want to be up there winning a world title and be up there with them names. Hopefully next year we’ll get big fights and get Connor Benn next summer. It’s a fight that the fans in the UK and Ireland would love to see and it would be a big fight. We need big fights back in Ireland as well and it could happen there and in the UK the fans would love to see it,”

In the wide-ranging interview, McKenna talks about his recent sparring trip to England with Robbie Davies Jr.; sparring with brother Aaron and becoming joint World Champions; aiming to become Irish boxing’s next big star; his increased popularity since fighting live on Channel 5; fighting the best in the 147-pound division; the winner of the super-fight between Manny Pacquiao and Errol Spence and his new found love of horse riding and much more.

Promoter Mick Hennessy today announced that he has signed one of the best and most exciting young talents in World boxing, Stephen ‘Hitman’ McKenna, to a long-term promotional agreement.

Super-lightweight McKenna kicks off the new deal this Friday when he takes on Plymouth’s Des Newton in a six-round contest on the undercard of the Sam Eggington-Ashley Theophane super-welterweight showdown, live and exclusive in the UK on free-to-air Channel 5 from 10pm.

He’ll return to action in quick time when he features on Hennessy’s show just a week later on Friday 18th December with further exposure on the big British Light-Heavyweight title showdown between Shakan Pitters and Craig Richards, also live on Channel 5.

The red-hot prospect’s last fight was on Hennessy’s show in September – on the Alex Dilmaghani-Samir Ziani undercard – when he gave viewers a short and clinical display of precision power-punching, halting Gary McGuire after flooring him three times inside the first round.

Now unbeaten in five professional fights with five KO’s, fire-fisted McKenna from Monaghan, Ireland, has stopped all-bar-one of his opponents inside the first round, with only one making it into the second.

As an amateur McKenna’s credentials are impeccable. He represented Ireland at International level under the Irish Boxing Association with 155 fight under his belt. Incredibly, he won the Irish Under 18 youth title, Commonwealth Youth Gold in Samoa and was crowned Irish Elite Senior Champion all in the same year announcing him as a major young star in Irish boxing.

Moving to Los Angeles in 2018 to train under the legendary Freddie Roach at the Wild Card Gym, McKenna has gained invaluable experience sparring with some of the world’s best in Vasily Lomachenko, plus top fighters Sergey Lipinets, Jose Zepeda, Hikori Okada, Antonio Orozco, Javier Molina, Lee Selby and Ryan Garcia.

Talent runs through the McKenna family, with his brothers Aaron – an unbeaten super-welterweight prospect who fights alongside Stevie on the Eggington-Theophane undercard, courtesy of his promoter Golden Boy Promotions – and now retired former amateur star Gary.

With his future secure under the promotional guidance of Hennessy, McKenna will also have the continued valuable support of his father and co-trainer Fergal and his manager Ken Sheer of Sheer Sports as he continues to develop towards championship honours.

McKenna, who is thrilled to begin the next chapter of his career under Hennessy, said, “I’m very excited to sign with Hennessy Sports. I have heard great things about them and I’m looking forward to building up my fan base here in the UK and Ireland with exciting fights being shown live on Channel Five. I know that Mick will do everything in his power to give me the opportunity to become a major world champion and become a PPV star when I’m in the marquee fights.”

Hennessy added, “Stevie is a sensational talent and I’m proud and delighted to welcome him to the Hennessy Sports team. I’m really looking forward to working with Fergal and Ken, Lyle and Rachel from Sheer Sports who have all done a fantastic job to get Stevie to this stage. We will be working closely together to take Stevie to the very top to become a world champion and mainstream star. He’s got a very busy week ahead and then he will have an active schedule for 2021 where he will play a major role in our exciting developments for the future.”

Rachel Charles. Sheer Sports Management, said, “We are tremendously happy for Stevie “Hitman” McKenna inking a promotional deal with Hennessy Sports. Stevie has given so much passion, dedication, focus and work ethic to get to where he is today and it’s paying incredible dividends. This is a very proud and exciting day for Sheer Sports Management. We have no doubt whatsoever that Stevie “Hitman” McKenna will become a World Champion sooner rather than later. Mick Hennessy has a well documented proven track record and because of that we know he is the man to get Stevie to the top. We would like to thank Mick and his team and we look forward to a great ride.”