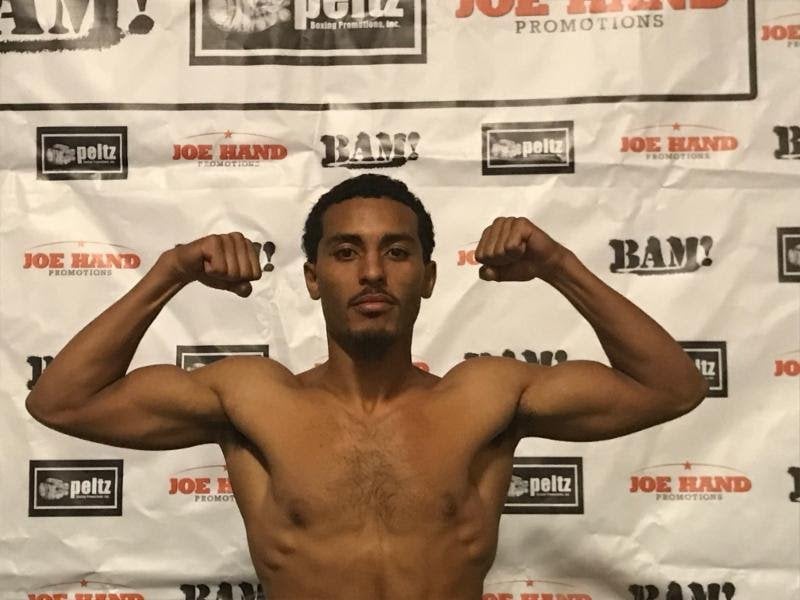 PHILADELPHIA – Philly fighters featured on the Xcite Fight Night card this Friday, March 9 at Parx Casino participated in an open to the public media workout Tuesday at Joe Hand Gym.

Here’s what they had to say!

Avery Sparrow, Featherweight, Ranked No. 14 by WBO
Sparrow one of the fastest-rising prospects in the Philadelphia area, will take on seasoned veteran Jesus Serrano, of Nogales, Mexico in the main event.

“I watched some footage on Jesus Serrano. About one minute and then I turned it off and put on Floyd Mayweather. I wasn’t too impressed. Every time I see the possibly of an upset, I get more confident.”

“Some things that happened last year were designed just for me. The universe was working in my favor. After I fought Anthony Burgin, everything just fell in my lap.”

“When I fought Isaelin Florian that was 8 days notice. That came fast. But I’m in the gym and I’m not shying away from any opportunities. I wake up every day to be a star.”

“I watched 30 seconds of Jose Lopez and said, ‘Oh yea, we got this.’ I took the fight in eleven days notice. I could have done better. But I won convincingly.”

“I’m pushing to be a world champion. I got to beat certain guys and do certain things to get there. But I am willing to do those things. I’m getting better every fight. I train for a 12-round world championship fight every fight.”

“Winning two Philly Briscoe Awards is amazing. These are the little steps that we take to get to the big stage. It is satisfying.”

“I don’t know Alex Torres Rynn. He knows me. Apparently, he’s talking some sh*t. He just wants to make a name for himself. I don’t think he’s that stupid to think he can win. He’s going to get his ass kicked. He can’t talk so much when he’s sleep!” -John Joe Nevin https://youtu.be/Y1QAqZPm3UE

Even before I turned pro, they judged me. They said I was nothing. They said I was a follower. But after 11 fights, I won a regional world title!” -Jerome Conquest https://youtu.be/BJRb_H2Cvhw

Nahir Albright, Junior Welterweight
Albright of Sickerville, NJ faces off with Sidney Maccow of New York, who will be traveling to Pennsylvania for the first time since his pro debut in 2014.

“I had an eight-week camp. I stay in the gym all year round. waiting for an opportunity. The guy I’m fighting is a veteran. He’s got more fights than me. I have to stick to the gameplan and be ready. I like Manny Pacquiao. He came from nothing. He used to run with no shoes. It shows you that hard work will get you anywhere in this sport.” -Nahir Albright https://youtu.be/aLUz6Os8WP4

Isaiah Wise, 2017 Briscoe Award Nominee, Fight of the Year vs Fred Jenkins
Wise of North Philadelphia, will be in a classic Philly vs. New Jersey match up when he goes toe-to-toe with Anthony Prescott of Cherry Hill.

“Anthony Prescott is durable. He’s a crafty veteran. He’s not going to stop. But I don’t think he’s used to someone applying pressure like I do. I’m gritty. I want to live up to being a Philly fighter.”

Rising Philadelphia boxing star, Avery Sparrow, really made a career breakthrough in 2017. The junior lightweight won four bouts during the year, including two main events, and two national TV appearances. He started 2017 as a promising young local, but by the end of the year, Sparrow had broken into the world rankings.

On March 25, 2018, Sparrow will be honored with two Briscoe Awards for his accomplishments. First, he led the fan voting in the “Prospect of the Year” category, and also won the “Breakout Fighter of 2017” unopposed. Sparrow will receive his two awards at the 11th Annual Briscoe Awards ceremony, a party for the boxing community, at the VBA Clubhouse in Philadelphia.

“Sparrow really made a name for himself in 2017,” said John DiSanto, founder of the Briscoe Awards. “Big expectations have surrounded Sparrow since the beginning of his career, but last year he really showed everyone what big potential he has.”

A number of other fighters like Jaron Ennis, Tyrone Brunson, Dylan Price, Marcel Rivers, Kermit Cintron, and Jerome Conquest, will also be honored in various categories for their 2017 accomplishments.

Advance tickets for the March 25, 2018 Briscoe Awards cost $20 and are currently available for sale at BriscoeAwards.com, or by calling 609-377-6413. Tickets will not be sold at the door. The $20 admission includes food, draft beer, wine, soft drinks, and a souvenir program and ticket. The Briscoe Awards will be held at the VBA Clubhouse, 2733 Clearfield Street, Philadelphia, PA, 19134.

The Briscoe Awards are presented by Philly Boxing History Inc., a 501c3 Non-Profit organization dedicated to preserving and honoring the great legacy of boxing in and around the city of Philadelphia. For more information, call John DiSanto at 609-377-6413.