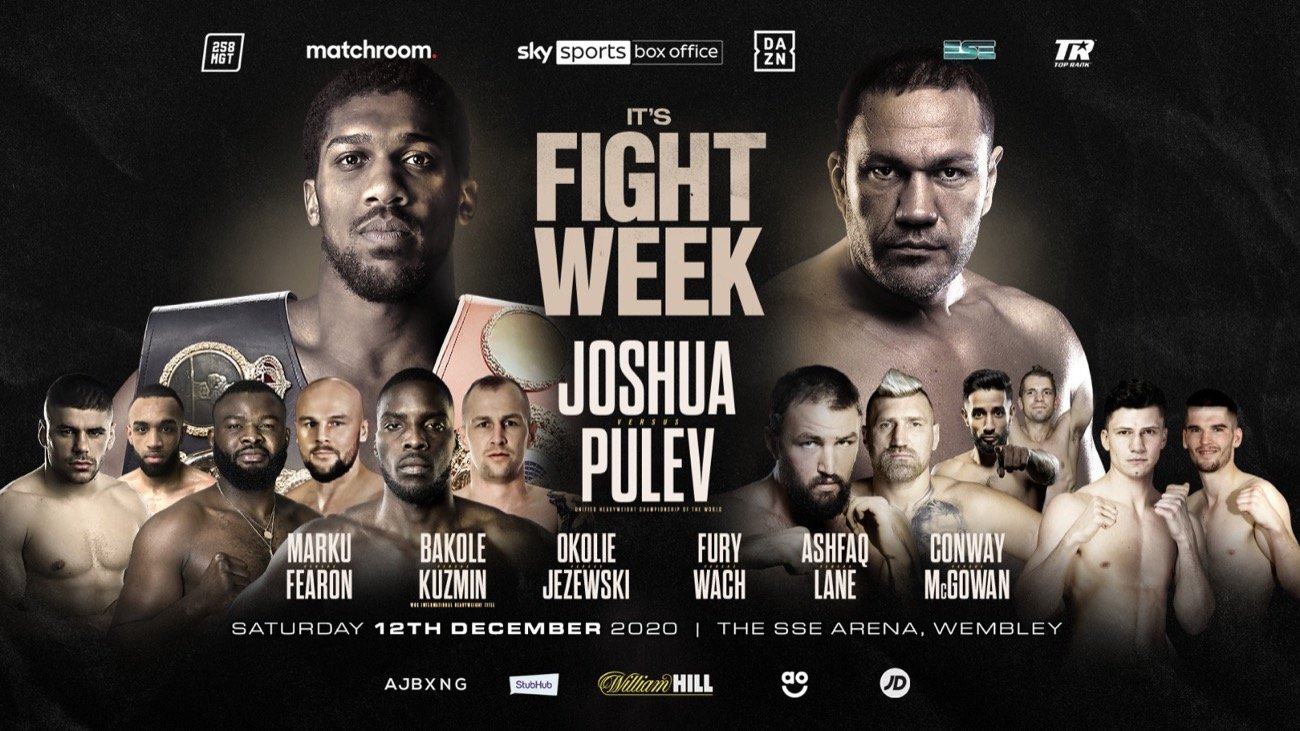 The full undercard to Anthony Joshua’s long-awaited return to UK soil against Kubrat Pulev at The SSE Arena, Wembley on Saturday December 12, has now been confirmed. All of the action will be shown live on Sky Sports Box Office in the UK and Ireland and on DAZN in the U.S. and more than 200 countries and territories on its just-launched Global platform.

Ramla Ali’s (1-0) second professional fight against Vansea Caballero (3-9-3) has been removed from the show after the Somali-British fighter, who made a winning start to life in the paid ranks in October, returned a positive COVID-19 test.

Macaulay McGowan has promised to go to war with MTK Global stablemate Kieron Conway when the Super-Welterweights meet over ten rounds on the undercard of Anthony Joshua vs. Kubrat Pulev at The SSE Arena, Wembley on Saturday December 12, live on Sky Sports Box Office in the UK and Ireland and on DAZN in the U.S. and more than 200 countries and territories on its just-launched Global platform.

McGowan (14-1-1, 3 KOs) suffered the first loss of his professional career last month when he was outpointed by rising Kazakh star Tursynbay Kulakhmet for the vacant WBC International Title in South Kirby, Yorkshire.

Undeterred by his first taste of defeat, the 26-year-old Mancunian, who is trained by Gary Booth, jumped at the chance to face Northampton’s Conway (15-1-1, 3 KOs), after his original opponent Souleymane Cissokho was forced to pull out of their fight.

“I’m absolutely buzzing,” said McGowan. “I want to be involved in good fights, so to be in a good fight on probably the biggest show of the year is great.

“I got punched from pillar to post in my last fight with Kulakhmet. It wasn’t my night. It is what it is. Boxing and life is about being resilient. There’s no time to moan about it, I was straight back training and now it’s time to bounce back and get a good win.

“One thing I learned from going into that Kulakhmet fight and how it all played out was that I was thinking about it too much and what the opponent was going to do. I don’t care about what Conway is coming with, I just worry about me. I’m going to war, that is that.

“I had all these ideas of how the fight was going to go and he came out totally different and better to how I expected him to. He didn’t do what I thought he’d do. Boxing is all about learning and I’m coming back stronger and hungrier than ever.

“A busy fighter is a happy fighter. My career has always been stop-start, so to be fighting straight away, and having a tough tough ten rounds in the bank will only help bring out the best in me. I will never shy away from competition. I’m coming for war and war only!”

CONWAY: I HAVE NO REASON TO AVOID ANYONE

Kieron Conway is out to stamp his mark on the red-hot domestic 154lbs division – starting with an eye-catching win over late stand-in Macaulay McGowan on the blockbuster Anthony Joshua vs. Kubrat Pulev card this Saturday at The SSE Arena, Wembley.

‘Too Class’ (15-1-1, 3 KOs), who was originally slated to fight Souleymane Cissokho this weekend before the Frenchman was forced to pullout, sealed a wide points win to claim the WBA Intercontinental Super-Welterweight Title against Nav Mansouri last time out.

After picking up the first Title of his professional career, the Northampton contender, who is trained by his father James, has a hunger for more belts, and already has Matchroom stablemates Scott Fitzgerald, Ted Cheeseman and Anthony Fowler in his sights for 2021.

“I’m really pleased that Matchroom and MTK found an opponent and a good fighter coming to take an opportunity,” said Conway. “When I found out Cissokho had pulled out I was very frustrated. The whole build-up was frustrating. I’m still up for taking the opportunity against Cissokho if it comes, I have no reason to avoid anyone.

“I hadn’t seen too much about Macaulay before the fight was made so I will be using my time wisely and finding the inevitable patterns in his work and do what I must to get the win. In all honesty you couldn’t take much from his last fight as Kulakhmet is a great fighter and would make most look bad.

“If McGowan over commits – which will happen, I will land hard accurate punches which absolutely could end the night early. Being on this show is huge. There’s going to be massive viewing figures and I’m excited to still be part of the whole thing. After this fight I want more big fights.”

All of the action will be shown live on Sky Sports Box Office in the UK and Ireland and on DAZN in the U.S. and more than 200 countries and territories on its just-launched Global platform.