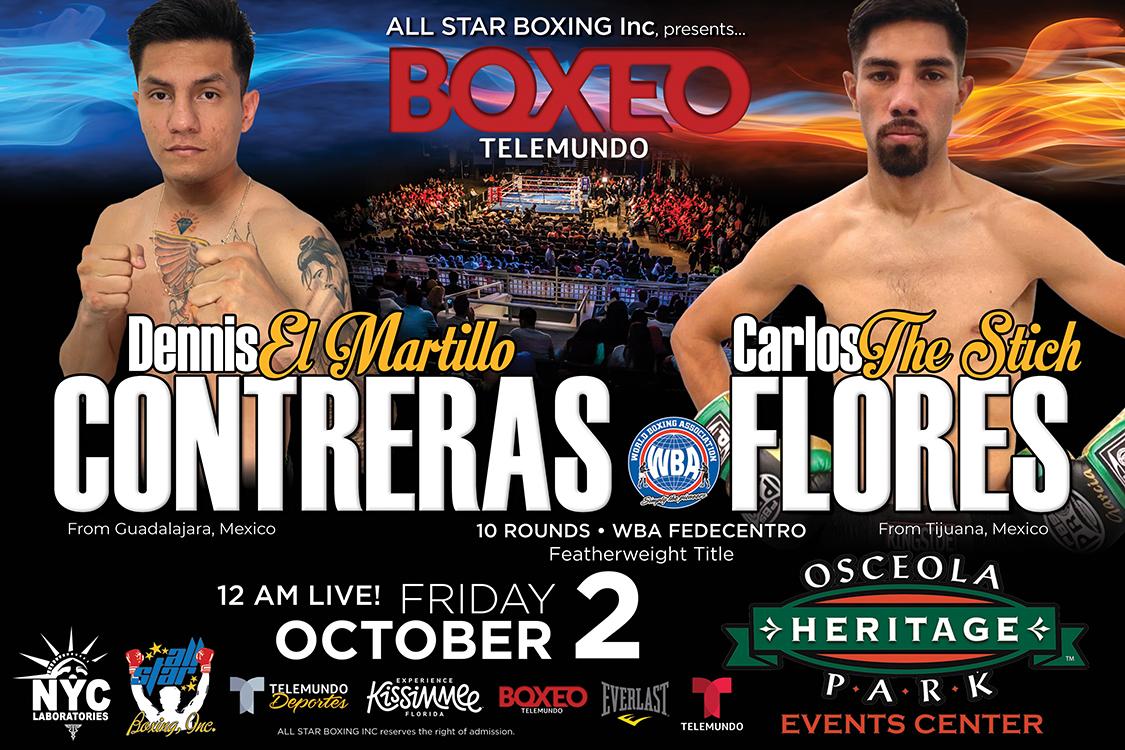 Miami, Florida. – All Star Boxing, Inc. along with Tuto Zabala, Jr. returns with this year’s final installment of Boxeo Telemundo. The Fall series opener will feature the hard-hitting Dennis “El Martillo” Contreras (22-10-1, 20 KO) will defend his WBA Fedecentro Featherweight Title against undefeated puncher Carlos “El Stich” Flores (20-0, 11 KO) in the main event on Friday, October 2, 2020, at the Osceola Heritage Park Events Center in Kissimmee, Florida. Bouts are in the bubble fight zone with no fans, Live on the world’s top Hispanic boxing show Boxeo Telemundo, Televised at 12 AM. ET
Check your local listings.

Contreras is coming off from his outstanding technical knockout performance over Belmar Preciado in August on the Boxeo Telemundo Summer series.

“I’m on a mission to becoming a world champion, and Flores is in my way.”

The 19-year-old “El Stich “Flores was thrown in the fire, winning his professional debut at the age of 16 by destroying Marcos Ochoa by TKO in the opening round in November 2017. Flores has been a fighting fright train continuing his 20 bouts winning streak.

“I am excited to be on in the October 2nd main event. This is a dream come true, and I am looking forward to showcasing my talents.”

Due to the COVID-19 situation, many boxing promoters around the world are holding their shows behind closed doors or canceling them altogether. However, with strict safety measures in place, the small nation of Malta is bucking the trend and is set to hold its third spectator attended event since July.

The event, which will be held on the 2nd of October and broadcast live on Fite.tv, features Malta’s own Haithem Laamouz making his return to the ring after winning a WBC title last year.

Demis Tonna of Prize Boxing Promotions commented: “In these hard times thinking like a promoter, it is not ideal to put on such shows with a restricted crowd. But being an ex-boxer myself and also being so close to my own boxers, it gives me that extra push. I see how they train day in, day out and that’s all to put on a show for the boxing fans. How can I say no to that? October 2nd is going to be one hell of a show!”

Co-Promoter Mark Wilson Smith added: “Let’s not forget that Malta hosted the world’s first spectated boxing/sports event post lockdown, and it’s great to keep that momentum going. The boxers need to earn a living and the fans are desperate to see them in action again too. Having a reduced audience isn’t ideal, but that is just part of the COVID-19 safety measures that we strongly adhere too. I’m just thankful to our loyal sponsors who are certainly helping out.”

WBC belt holder Haithem Laamouz said: “It’s good to be back! Can’t wait to fight in my home country again after a long time, and I will give the fans a sharp reminder of who The Flash is. I will get my winning streak going again and continue climbing the rankings!”

Fans’ favourite Christian Schembri, who recently enjoyed victory over local rival Scott Dixon, added: “It’s great being able to get in the ring soon after the trilogy with Dixon. I have been training non-stop after that fight to improve my skills and I plan to put on a great performance against Emilov. I will leave everything in the ring; not one step backwards will be taken!”

The event, scheduled to take place at the famous Montekristo, will also feature all-action Swedish boxer Niclas Elfstedt and skillful prospect Clarence Goyeram, as he looks to make it four wins from four fights.